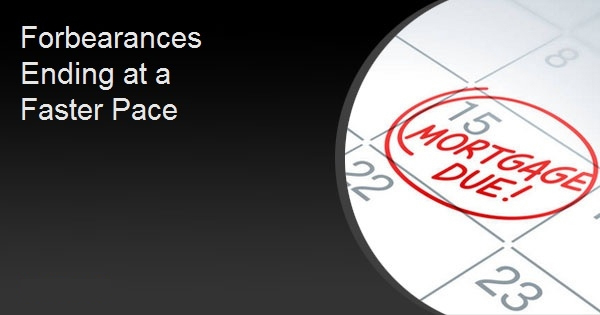 Forbearances Ending at a Faster Pace

Black Knight said its weekly forbearance survey found the number of mortgages in active forbearance decreasing at an accelerated rate. Those mortgages fell by 2.6 percent or 95,000 loans over the last week, bring the decline over the last month to 357,000 loans. It was the fifth straight week of improvement and Black Knight noted that since peaking in late May, the total number of forbearances has fallen by 1.17 million or 24 percent.

As of September 22, 3.6 million homeowners remain in COVID-19-related forbearance plans, or 6.8 percent of all active mortgages, down from 7 percent last week. Together, they represent $751 billion in unpaid principal. Some 78 percent of those remaining loans have had their terms extended at some point since March.

There are 1.1 million plans still set to expire by the end of September as servicers work to assess them for termination or renewal. This is .6 million fewer potential expirations than a week earlier.

The largest decrease in plans of the previous week, 51,000 was among portfolio-held mortgages. The -8 percent change took the number down to 923,000 forbearances, 7.1 percent of portfolio-held/private label security (PLS) loans.

The number of GSE (Fannie Mae and Freddie Mac) loans fell by 20,000 or 2.3 percent during the week to 1.36 million or 4.8 percent of the company's combined portfolios. There were 17,000 fewer FHA/VA loans than the prior week, a 1.2 percent reduction. The remaining 1.348 million forborne loans are 11.1 percent of the FHA/VA loan totals.

Investors in GSE securities are due to receive $1.5 billion per month in principal and interest (P&I) payments. Servicers of FHA and VA loans are obligated for advances of $1.2 billion and those servicing portfolio/PLS loans may have an obligation of as much as $1.6 billion. Tax and insurance payments on behalf of forborne loans range between $500 million and $600 million per month for servicers of each of the three loan types.