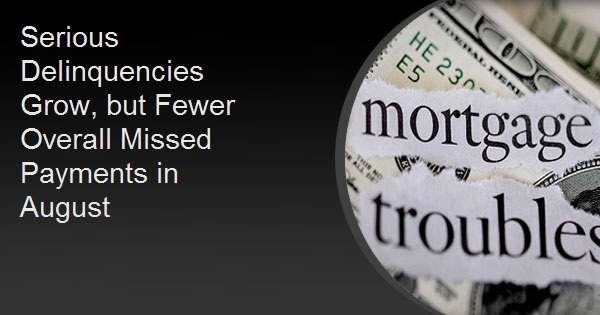 As the COVID-19 crisis dragged into its sixth month in August the total number of mortgage delinquencies continued to ebb, but the rate of decline appears to be slowing. Black Knight, in its first look at the month's loan performance data, found the national delinquency rate down 3 basis points to 6.88 percent. There were 13,000 fewer delinquent loans in August than in July, a total of 3.68 million that were 30 or more days past due but not in foreclosure. Black Knight considers loans in forbearance plans as delinquent even if servicers are not reporting them as such to the credit bureaus.

The share of borrowers with a single missed payment had already fallen below pre-pandemic levels. In August, the sum of all early-stage delinquencies (those 30 and 60 days past due) fell 9 percent, dropping below that benchmark as well

That's the good news. However, the national delinquency rate is 99.22 percent higher than it was in August of 2019, and 3.68 million homeowners are behind in their payments but not in foreclosure. Further, the improvement in the delinquency rate in June and July dwarfed August, a total decline of 85 basis points over the two months.

The number of serious delinquencies, i.e. loans that are at least 90 days past due but not in foreclosure, rose by 116,000 from July to August, an increase of 5 percent, and by 1.922 million loans year-over-year. Serious delinquencies have increased in each of the past five months although the growth in August was less than earlier months, suggesting they may be reaching a peak.

The company will provide a more in-depth review of the August loan performance data in its monthly Mortgage Monitor report which will be published by Oct. 5, 2020.