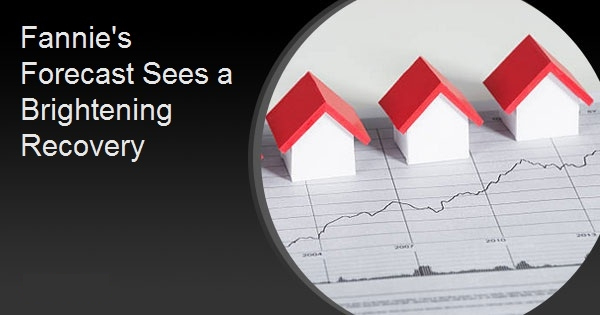 Fannie Mae has upgraded its forecast for the third quarter gross domestic product (GDP). It now expects growth at an annualized pace of 30.4 percent, up from the 27.2 percent the company's economists predicted in August. They say that growth has clearly slowed from the days soon after the business shutdowns and orders to shelter in place were gradually lifted by states and cities in May and June, but more recent data points to a continued recovery.

It was originally thought that personal consumption expenditures would fall off significantly as expanded unemployment benefits expired, but they rose 1.6 percent in July, and early data for August suggest that growth continued. Auto sales, one component of the PCE, rose 4.5 percent and credit and debit card transactions appear to have increased as well. There are also indications that business and housing investment will grow at a faster pace in the third quarter than previously thought.

However, while prospects appear slightly rosier for this quarter, the economists have downgraded their GDP growth estimate for the fourth quarter to an annualized 6.2 percent from 8.7 percent in their last forecast. This is based on both a smaller remaining recovery gap and the fading prospect for an additional round of stimulus before the election.

Next year's prospects will probably be limited again by pandemic concerns. Hospitality and travel could take several years to return to normal and "the pace of growth decelerate meaningfully in 2021, as recovery in sectors less harmed by social distancing measures nears completion."

The housing data that has come in since the last Fannie Mae forecast continues to demonstrate a V-rebound which is helping to drive the broader economy. Existing home sales in July were up month-over-month by 24.7 percent to an annualized pace of 5.86 million units, the highest since 2006. The July blowout will probably not be followed by the predicted pullback in August as pending home sales rose 5.9 percent in July, setting the stage for strong closings in 30 to 45 days and purchase mortgage applications were also as high in August as July. Construction measures were also strong; July housing starts were the highest since February.

Pent-up demand from the spring, historically low mortgage rates, and what appears to be an increased interest in moving to suburban areas in at least some metro areas is fueling strong home purchase demand.

While the July pace of sales was in line with Fannie Mae's expectations, the continued strength in August has exceeded them. The company, however, says the pace of sales isn't sustainable given the lack of inventory. New single-family listings have grown modestly on a year-over-year basis, but the growth is much slower than purchase demand. The months' supply of homes for sale as a ratio of sales fell to 3.1 at the end of July, down 26 percent from a year prior and to the lowest level for the month of July in the history of the series. The forecast for existing home sales has been increased for the remainder of the year, but the fourth quarter will probably be down somewhat from the current quarter. Extremely limited inventory of existing for-sale homes will likely continue to bolster demand for new homes. Single-family housing starts rose 8.2 percent in July but that was outpaced by new home sales which jumped by 13.9 percent to 901,000 annualized units, the highest level since 2006. Even with a strong recovery in construction, supply is not keeping up with demand. The months' supply of new homes for sale where construction has been started as a ratio of sales fell to 3.0 in July, tying the lowest level since 2004. Given these conditions the forecast starts has been increased to over one million annualized and for the full-year total to rise 5.1 percent above 2019 levels.

Fannie Mae now forecasts residential fixed investment (RFI) in the third quarter to grow 48.7 percent annualized and has upgraded its forecasts for both new and existing home sales. For 2020, total home sales are now expected to be 1.3 percent higher than in 2019.

The lack of inventory of for-sale homes is putting upward pressure on home prices and threatens to negate the affordability benefits from low mortgage rates. The CoreLogic National House Price Index showed an acceleration in annual house price growth to 5.5 percent in July, up 1.2 percentage points from June and Realtor.com says the median listing price the first week of September was 10.8 percent higher than a year earlier.

Estimates for purchase mortgage originations were increased consistent with recent, robust housing data as well as continued strength in acquisitions and securitizations data. They should grow 8.9 percent in 2020 to $1.4 trillion, $112 billion higher than last month's forecast.  Purchase volumes should grow 3.3 percent in 2021 as decelerating home price growth limits additional volume.

Refinance originations were also revised upward, now totaling $2.4 trillion in 2020, a full $350 billion higher than last month's forecast. This revision was driven by stronger-than-expected securitization and application activity, though some of this volume are refinance originations being pulled forward so estimates for next year have been lowered modestly. The company still expects that the low-rate environment will support refinance demand over the forecast horizon. At the current interest rate of 2.86 percent, nearly 69 percent of outstanding first-lien loan balances may have at least a half-percentage point incentive to refinance. Total mortgage originations should reach $3.87 trillion, which would be the highest nominal dollar annual total since Fannie Mae began tracking it in 1988.

Most short-term interest rates should remain low for the foreseeable future given the Federal Reserve's latest Policy Framework update. The largest change included making the two percent inflation target an average objective, meaning that the Fed will now be comfortable allowing inflation to run above the threshold for a longer period of time and will thus be unlikely to raise interest rates to head off inflation. The impact on longer-run rates, like the mortgage rate, will depend in part on the Fed's future management of inflation expectations.

Fannie Mae says risks to its forecast remain elevated. COVID-19 cases in the U.S. continue to trend downward, although the pattern in Europe suggest they could spike here again as well, and development and distribution of a vaccine will probably determine the path of consumer behavior. Uncertainty surrounding fiscal and other policies remains high as the election approaches.

Further downside risks in the coming quarters include a slowdown in global growth and consumer retrenchment in the face of diminished unemployment benefits and the expiration of the Paycheck Protection Program (PPP) loan program. On the other hand, the pace of consumer spending in July remained historically modest compared to income levels. The personal savings rate stood at 17.8 percent. Even with declining unemployment benefits in August, it is likely that the savings rate will continue to be well above the recent pre-coronavirus range of 6 to 9 percent. Combined with extremely supportive monetary policy and continued pent-up demand, significant upside risk is also present. Many households have the means to further drive a consumption demand recovery if they are willing to do so.