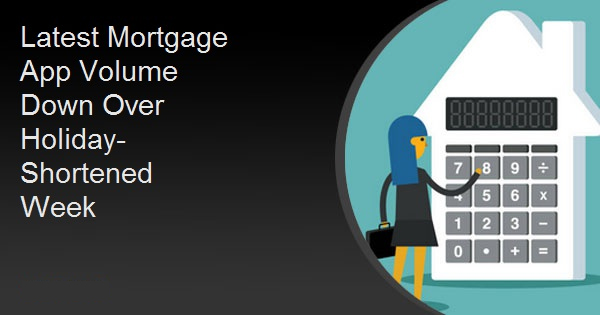 The Mortgage Bankers Association (MBA) reports that mortgage applications declined during the week ending September 11, 2020. The week's results include an adjustment for the Labor Day holiday.

MBA's Market Composite Index, a measure of all mortgage loan application volume, decreased 2.5 percent on a seasonally adjusted basis from the previous week. It was down 13 percent on an unadjusted basis.

The Refinance Index decreased 4 percent from the previous week and was 30 percent higher than the same week one year ago. The refinance share of mortgage activity was 62.8 percent of total applications compared to 63.1 percent the previous week.

The seasonally adjusted Purchase Index was down 1 percent from one week earlier and 12 percent before adjustment. The index still remained higher than during the same week in 2019, this time by 6 percent.

"Mortgage rates held steady last week, and the 30-year fixed rate - at 3.07 percent - has now stayed near the 3 percent mark for the past two months. A 5 percent decline in conventional refinances pulled the overall index lower, but activity was still 30 percent higher than last year. With the flurry of refinance activity reported over the past several months, demand may be slowing as remaining borrowers in the all market potentially wait for another sizeable drop in rates," said Joel Kan, MBA's Associate Vice President of Economic and Industry Forecasting. "Applications to buy a home also decreased last week, but the underlying trend remains strong. Purchase activity has outpaced year-ago levels for 17 consecutive weeks, with a stronger growth in loans with higher balances pushing MBA's average loan size to a new survey high of $370,200."

Contract interest rates ticked down for most types of fixed rate mortgages (FRMs) and the effective rates of all fixed-rate types moved lower. The average rate for the 30-year FMR, loans with balances at or below the conforming limit of $510,400, was unchanged at 3.07 percent. Points decreased to 0.32 from 0.36.

The rate for jumbo 30-year FRM, loans with balances greater than the conforming limit, increased to 3.41 percent from 3.40 percent. Points decreased to 0.27 from 0.31.

The average contract interest rate for 30-year FRM backed by the FHA was unchanged at 3.16 percent, with points decreasing to 0.35 from 0.42.

The average contract interest rate for 15-year FRM decreased to 2.61 percent from 2.62 percent, with points increasing to 0.35 from 0.33. The effective rate decreased from last week.

The average contract interest rate for 5/1 Adjustable rate mortgages (ARMs) increased to 3.20 percent from 2.99 percent, with points remaining unchanged at 0.58. The effective rate increased. The ARM share of activity increased to 2.3 percent of total applications.

MBA's latest Forbearance and Call Volume Survey found another decline in the total number of loans in forbearance, this time a 15-basis point dip to 7.01 percent. According to MBA's estimate, 3.5 million homeowners are in forbearance plans.

By stage, 33.69 percent of total loans in forbearance are in their initial plan while 65.35 percent are in a forbearance extension. The remaining 0.96 percent are plan re-entries. Total weekly forbearance requests as a percent of servicing portfolio volume (#) increased relative to the prior week: from 0.09 percent to 0.11 percent.

"The beginning of September brought another drop in the share of loans in forbearance, with declines in both GSE and Ginnie Mae forbearance shares. However, at least a portion of the decline in the Ginnie Mae share was due to servicers buying delinquent loans out of pools and placing them on their portfolios. As a result of this transfer, the share of portfolio loans in forbearance increased," said Mike Fratantoni, MBA's Senior Vice President and Chief Economist. "Forbearance requests increased over the week, particularly for Ginnie Mae loans. With just under 1 million unemployment insurance claims still being filed every week, the lack of additional fiscal support for the unemployed could lead to even higher increases of those needing forbearance."