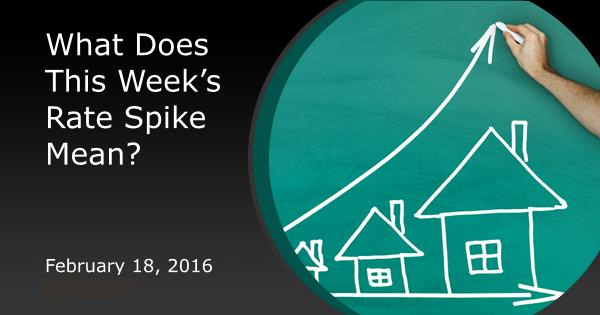 What Does This Week’s Rate Spike Mean?

Mortgage rates came very close to all-time lows last week. Throughout 2016, their move lower had been almost completely unopposed. When anything in financial markets moves faster than normal in one direction, it’s only a matter of time before we see a correction.

That’s little consolation to those who did happen to see last week’s rates and missed the chance to lock. In other words, this week could be viewed in a positive or negative light. The same is true in thinking about what the correction means going forward.

Optimists could decide that the spike is merely a correction to an ‘overheating’ of the positive trend in 2016 (a trend that could now continue). In other words, maybe rates went too low, too quickly and had to adjust to a more sustainable pace. This version of reality is seen in the top pane in the following chart of 10yr Treasury yields (a more active proxy for mortgage rate momentum). 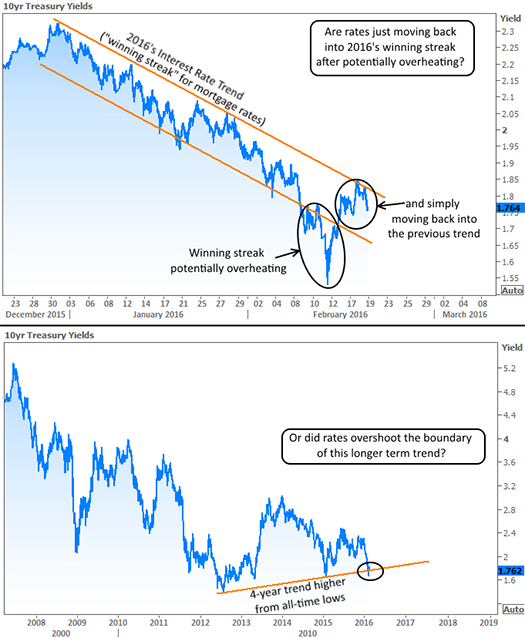 The lower pane, of course, represents the more cautious, pessimistic view. Specifically, this week’s spike could be seen as an attempt to get back in line with a much longer-term trend leading away from 2012’s all-time lows.

It is always good to remember that there is no way to know which one of these assessments is more accurate. Cases can be made and trends can be followed, but ultimately, the very best strategy is to be aware of the possibilities and to have a game-plan ready to execute for any given outcome.

I do think it’s fair to say that we haven’t seen enough weakness in rates markets (or enough strength in stocks) to conclude that the good times are over in 2016. Corrections and spikes like those seen this week will always happen periodically when rates are moving as aggressively as they have been.

Housing Starts and Building Permits came in just slightly lower for January, but remained in strong territory overall. Starts were down 3.8 percent to 1.099 million and Permits fell 0.2 percent to 1.202 million.

Finally, Builder Confidence continued to slide this week according to NAHB’s Homebuilder Sentiment Index. Some context is important here though. First of all, there are normal seasonal distortions in this data that result in confidence typically bottoming out in the spring. It looks like we’re heading into that same cyclical pattern. Beyond that, the Index is still in great shape in the bigger picture: 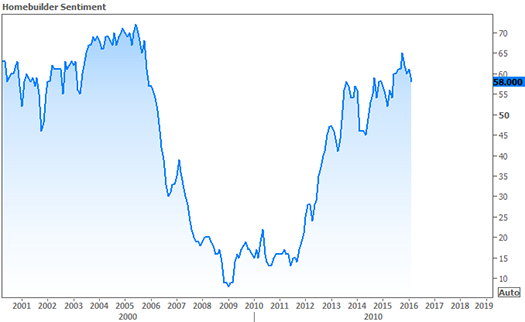