Just How Much Do Stocks Matter For Rates?

At present, there is a disconnect between stocks and economic data. In fact, equities markets continue to have the worst start to a year—ever—despite some of the best economic reports in recent memory (like the most recent jobs report which crushed estimates and ranked among the 10 best of the recovery).

The disconnect is a pleasant surprise for interest rates, which have been falling in concert with stocks. But it begs the question: if rates are moving lower with stocks right now, why haven’t they been moving higher with stocks for the past few years?

If the Fed’s response to the financial crisis reinforced any lesson about markets, it’s that stocks and bonds don’t always have to follow each other. This was easiest to observe when both sides of the market would respond favorably to increased accommodation from the Fed (i.e. loose monetary policy helped stocks rise and rates fall simultaneously).

But to be sure, it was only a reminder of something we could have already seen in the past. In fact, it’s as simple as pulling up a long term chart of stock prices and 10yr Treasury yields (which generally moves in concert with mortgage rates). 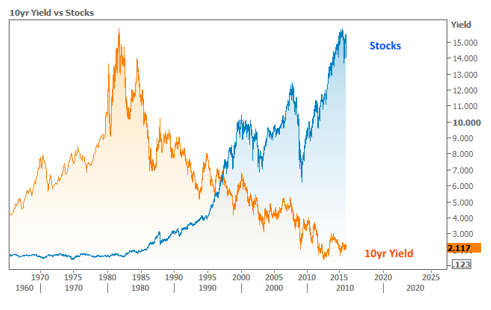 There’s no trick involved with this chart. Bond yields really did fall consistently since the early 80’s while stocks exploded higher. It’s only when we zoom in to much shorter time scales that we see the correlation. 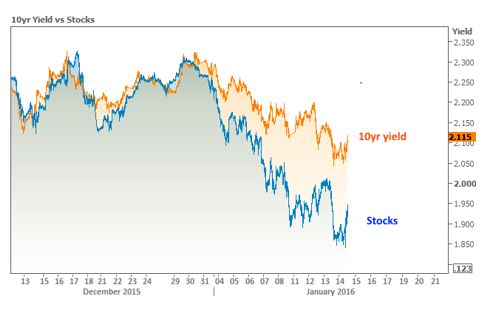 The bigger the losses in stocks, the more likely bond markets are to be paying attention (i.e. falling rates), and early 2016 losses have been massive. Why so big? Opinions vary, but one of the easiest reasons to grasp would be that investors are worried about something like this: 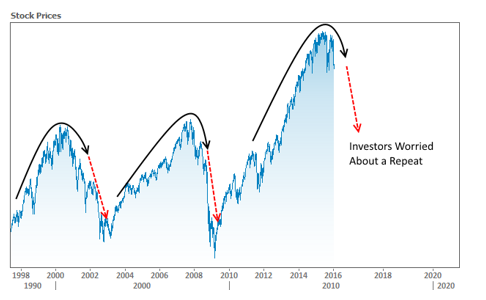 If stocks are indeed headed for another long term shift like that seen in the chart above, it would make sense for investors to frantically search for places to keep their money safe. The bond market is a natural safe haven and additional buying demand in bonds is what helps rates go lower.

On a qualitative note, there’s really no telling how long this paradox will last. It already seems to have taken many market participants off guard.

Black Knight had an interesting perspective regarding the increase in “tappable” equity likely to result in a HELOC resurgence.

Somewhat in line with the bigger-picture stock market gloominess, a Fed Survey found that consumers are expecting low wages and inflation to match.

On a final note, keep in mind that this is a 3-day weekend for financial markets. Mortgage lenders will be closed on Monday in observance of Martin Luther King Jr. Day.