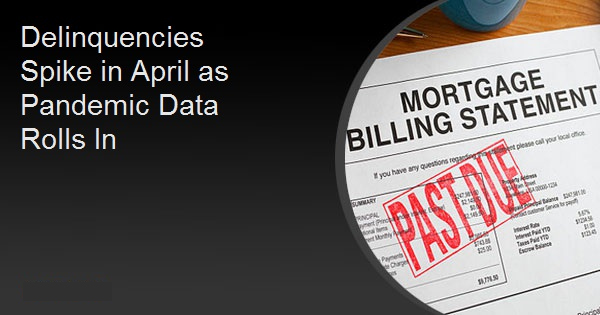 Delinquencies Spike in April as Pandemic Data Rolls In

April's data is here, and CoreLogic is reporting that early stage delinquencies, that is mortgages 30 to 59 days past due, soared to levels even higher than those seen in the Great Recession. That delinquency bucket now contains 4.2 percent of active mortgages, up from 1.7 percent in April 2019.

Further, the company's Loan Performance Report says the share of mortgages that transitioned from current to past due reached the highest level in at least 21 years, 3.4 percent, exceeding any statistics from the Great Recession. In January 2007, just before the start of the financial crisis, the current- to 30-day transition rate was 1.2 percent and it peaked in November 2008 at 2 percent.

The company notes that prior to the COVID-19 pandemic, the nation's overall delinquency rate had declined for 27 consecutive months, and serious delinquency and foreclosure rates stood at record lows. However, the business closures and stay-at-home orders pushed unemployment rates to the highest level in more than 80 years in April, reducing affected homeowners' ability to make monthly mortgage payments.

The national delinquency rate jumped 2.5 percentage points in a single month to 6.1 percent. This is the highest level since January 2016 and up from 3.6 percent a year earlier.

The CARES Act, passed by Congress in March, provides forbearance for homeowners who were economically impacted by the pandemic if their mortgages are backed by the GSEs Fannie Mae and Freddie Mac, the FHA, or the VA. CoreLogic's delinquency numbers include those loans in forbearance even if the loan has not been reported as past due to credit reporting agencies.

"The resurgence of COVID-19 infections across the country has created economic uncertainty and leaves those who are unemployed concerned with their ability to make monthly mortgage payments," said Dr. Frank Nothaft, chief economist at CoreLogic. "The latest forecast from the CoreLogic Home Price Index predicts prices declining in all states through May 2021, erasing some home equity and increasing foreclosure risk."

The increasing delinquencies have not yet begun to impact later stage buckets. The rate of 60 to 89-day delinquencies rose from 0.6 percent in April 2019 to 0.7 percent while serious delinquencies, including loans in foreclosure, were down slightly, from 1.3 percent to 1.2 percent on an annual basis. It was the fifth consecutive month that the serious delinquency rate set a record low for the current century. The Foreclosure Inventory Rate (the share of mortgages in some stage of the foreclosure process) also eased back, from 0.4 percent in April 2019 to 0.3 percent, the lowest for any month since January 1999.

"Despite the scale and suddenness of the pandemic, mortgage delinquency has yet to emerge as a major issue, thanks to government COVID-19 relief programs and other housing finance industry efforts," said Frank Martell, president and CEO of CoreLogic. "As the true impact of the economic shutdown during the second quarter of 2020 becomes clearer, we can expect to see a rise in delinquencies in the next 12-18 months - especially as forbearance periods under the CARES Act come to a close."

All states logged increases in overall delinquency rates in April. New York and New Jersey were both hot spots for the virus and experienced the largest overall delinquency gains of 4.7 and 4.6 percentage points respectively in April on an annual basis. Nevada, Florida and Hawaii were hit hard by the collapse in business travel and tourism, posting spikes of 4.5, 4.0 and 3.7 percentage points, respectively.