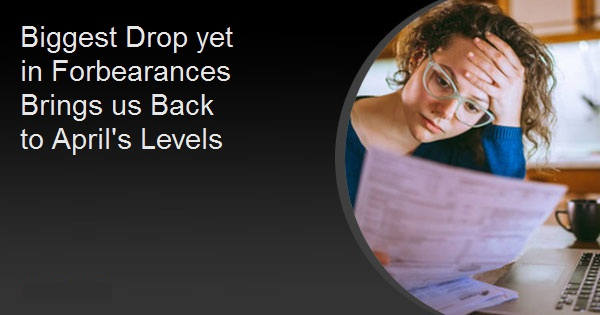 Biggest Drop yet in Forbearances Brings us Back to April's Levels

Black Knight's weekly report on the numbers of mortgage loans in COVID-19 forbearance plans shows that a decline in those numbers of nearly a half million last week. More than 435,000 homeowners exited the plans, the largest drop yet.

As of July 7, 4.14 million homeowners were in the plans which allow them to skip or reduce their mortgage payments if they are suffering financial problems due to the pandemic. This represents 7.8 percent of mortgage lenders and just under $900 billion in unpaid principal. This is the smallest number of plans since April 28.

Andy Walden, economist and director of market research for Black Knight, provided some context. "This latest decline in the number of homeowners in active forbearance is an encouraging sign of continued improvement. The reduction of roughly 435,000 - the largest single-week drop yet - was driven at least in part by the fact that more than half of all active forbearance plans entering the month were set to expire at the end of June. While the majority of those have been extended, this week's data suggests a significant share were not."

Even with the lower numbers, servicers of government backed loans are still obligated to make significant advances of principal and interest (P&I) to investors in mortgage-backed securities as well as payments of property taxes and insurance premiums (T&I). Black Knight estimates that servicers of GSE-backed loans have monthly obligations of $1.9 billion for P&I and $700 million for T&I. FHA/VA servicers must make advances of $1.3 billion and $500 million respectively. Servicers of other loans could have $1.8 billion and $600,000 million in advance obligations.