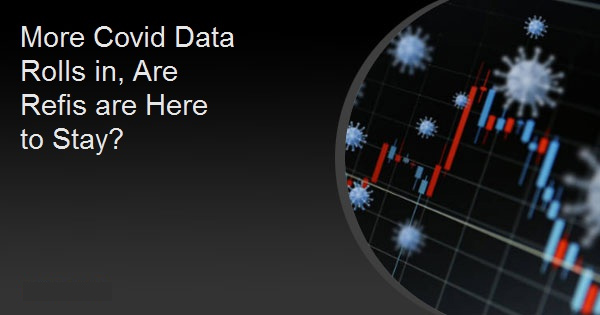 More Covid Data Rolls in, Are Refis are Here to Stay?

Black Knight has again taken a look at the number of Americans who could benefit significantly from refinancing their first mortgages, but the facts are shifting almost faster than they can report them. In its current Mortgage Monitor, the company reports that 90 percent of homeowners who have sufficient equity in their homes and the qualifying credit to refinance could improve their current interest rate.

Sufficient, or what the company calls "tappable" equity is defined as allowing a refinance while keeping the loan-to-value (LTV) ratio at 80 percent or lower. That equity rose 8.0 percent from the first quarter of 2019 to the same quarter this year. The total is a record high of $6.5 trillion. Despite rising mortgage delinquencies, about 13.6 million homeowners still meet broad eligibility requirements to refinance.

Refinance candidates are those who could lower their mortgage interest rate by 75 basis points or more. Mortgage rates as of June 18 were at a record low of 3.13 percent. At those rates, the 13.6 million refinance candidates could save an average of $283 per month on their mortgage payment. If all eligible candidates were to refinance their mortgages, they would see an aggregate savings of $3.9 billion per month, representing a potentially significant and much-needed stimulus to the economy. Of these, some 4.6 million could save at least $300 per month on their mortgage payments, while 2.6 million would be able to save at least $400 per month. More than three quarters of those refinancible homeowners have rates above 3.5 percent.

In his commentary in the Monitor, Black Knight Data & Analytics President Ben Graboske noted that, "Mortgage rates fell to a record low of 3.13% on June 18 according to Freddie Mac's Primary Mortgage Market Survey; if they were to tick down just one basis point, that population would swell by 20% to 16.3 million, an all-time high for refinance incentive."

After the current Monitor went "to press," that is precisely what happened. Freddie Mac reported rates down again to yet another record low of 3.07 percent with the expected increase in the refinance pool. Freddie Mac has predicted that rates will fall below 3.0 percent by year-end. Black Knight says current rate lock data indicates that the pattern is likely to continue. Through June 19, cash-out refi locks were down 6 percent from the comparable time frame in Q1 while rate/term locks were up 13 percent in spite of the massive wave of refinances that took place in early March. There has also been a rise in credit scores among those locking in cash-out refinances, up 24 points from January through June. Black Knight says this may indicate that credit standards are tightening for those mortgages, and one reason their volume has been falling. However, the company also points out that scores commonly rise with falling rates as high-quality borrowers tend to be quick to take advantage of falling rates. Credit scores have also rising among both purchase and rate/term locks by 11 and 22 points, respectively. Still, there is a pandemic out there and its impact is being felt. Last month's Monitor reported that the population of qualified refinance candidates had been reduced by about 4 percent due to a new delinquency. Black Knight's weekly forbearance report for June 30 showed the first increase in those plans after three weeks of decrease and that 8.8 percent of active mortgages are in a plan. Further, the percentage of homeowners in plans who have continued to make their payments has fallen each month - from 46 percent in April to 30 percent in May. As of June 23, only 22 percent of June payments had come in. Nearly half of outstanding forbearances were scheduled to expire in June so the June payment was the last covered under the initial period. Another 25 percent will expire in July. The plans were set up with an initial three-month term although six-months is authorized by the CARES Act and homeowners can request for 12 months for government-backed mortgages. This means servicers may have been reviewing more than two million plans throughout June to see if extensions are needed. While this will provide a heavy workload for servicers, Black Knight says it will also provide an early look at the roll rates of loans out of forbearance.

The pandemic and resulting stay-at-home orders and business closures hit the real estate market hard, and in person home showings fell by 63 percent in April compared to a year earlier. They are now rebounding, with volumes as of July 1 up 15.7 percent year-over-year and 12 percent higher than the pre-COVID-19 peak. Purchase lending has also exploded (as did the National Association of Realtors Pending Home Sale Index for May). Purchase rate lock activity hit its highest level of 2020 in the third week of June, up 60 percent from May and 57 percent from March, previously the strongest month of the year. Black Knight says this suggests the some of the home sales and purchase loans lost in March and April may ultimately be recovered.