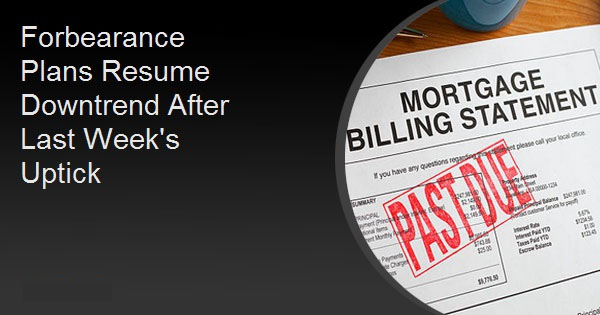 The number of homeowners in COVID-19 forbearance dropped sharply this week, to the lowest level since the first week of May. The number of plans which hit a peak on May 22 then declined slowly over the next three weeks but shot up by nearly 80,000 loan plans during the week ended June 23. Black Knight's survey of mortgage loan servicers found a resumption of the downward trend this week, with plans falling by 104,000, the largest decline so far.

As of June 30, there were 4.58 million homeowners in forbearance due to pandemic related financial problems, down 183,000 from the peak. This is 8.6 of the nation's active mortgages, compared to 8.8 last week and represents $995 billion in unpaid principal.

Black Knight said more than half of half of the active plans, set up with initial 90-day forbearance periods, were set to expire in June. By the end of the usual 15-day grace period allowed for most mortgage payments before a late fee is incurred, roughly a quarter of homeowners in forbearance had made their June payment. This is down from 46 percent in April and approximately 30 percent in May.

Black Knight says it remains to be seen what impact the new spikes in COVID-19 around much of the country will have on forbearance requests in coming weeks. If increasing cases lead to another round of shutdowns - or extensions of those already in effect - and put upward pressure on unemployment numbers, we could see yet another reversal of this trend. The same holds true for the looming expiration of expanded unemployment benefits.