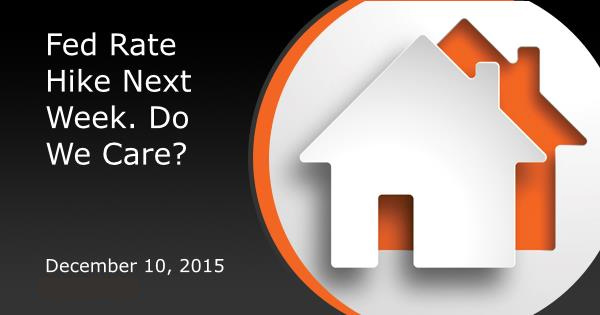 Fed Rate Hike Next Week. Do We Care?

The cadence of financial market movement has grown increasingly similar to that seen on the week leading up to the September Fed meeting.  Why might that be?

At the time, there was widespread consensus about the Fed hiking its policy rate in the following week’s meeting.  While the Fed ultimately abstained, we would later learn that it was only because they were spooked by sharp global market movements driven by unexpected overseas developments.

Specifically—and to paraphrase a variety of more equivocal snippets from Fed speeches –the Fed was freaked out by China’s surprise decision to devalue its currency combined with collapsing stock prices and deteriorating global economic data.  All of the above meant that a September rate hike stood the chance of being the most epically ill-timed policy decision in modern economic history.

Whether or not the fears were justified, China ended up finding a footing, as did global economic data.  Granted, the global economy isn’t firing on all cylinders, but neither is it in a state that justifies zero interest rates.

The Fed spent the last several months making sure markets are fully prepared for a rate hike in the December meeting.  They’ve done a great job too.  The consensus for a hike has never been higher, as measured by Fed Funds Futures (where traders bet on the probability of various Fed Funds Rate levels) or by surveys (where more than 90% of economists see a rate hike next week).

Long story short, it would be an utter and complete shock to most market participants if the Fed didn’t hike next week.  But what does the hike mean for mortgage rates?  Incidentally, that conclusion is also the same as it was in September.

Back then, I pointed out that US Treasuries are like the spokesperson for interest rates in the US.  The mortgage-backed-securities (MBS) that drive mortgage rates tend to operate within a certain distance of the comparable Treasury security.  Considering that the current crop of mortgages is expected to last nearly 10 years, we’re primarily interested in the fate of 10yr Treasuries.

The Fed Funds Rate, on the other hand, is an OVERNIGHT lending rate.  It has infinitely more in common with the shortest term Treasuries.  The shorter and longer term rates can have a widely varied relationship with each other.  There are even times where short term rates will move higher than long term rates, but the important point is this: a hike in the Fed Funds Rate has the biggest implications for those short term rates, and potentially very little implication for longer term rates like mortgages.

Not only that, but the level of consensus in the marketplace for a Fed hike means that the entire interest rate spectrum has already done a lot to “price-in” higher short term rates.  This is one reason we see 2yr Treasury yields at the highest level in more than 5 years while 10yr yields and mortgage rates are still in the lower half of their range over the same time frame. 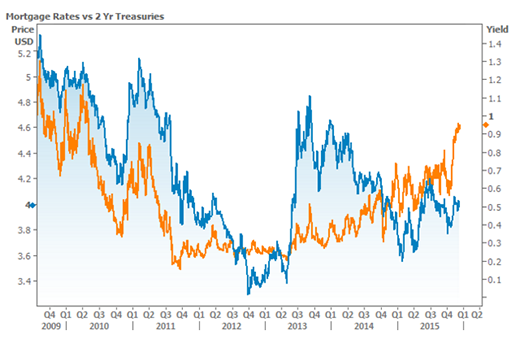 Bottom line, a Fed rate hike does not equate to a mortgage rate hike.  True, you could easily say mortgage rates have moved higher because of the expectations, but as far as the reaction to next week’s events, it’s still anyone’s game.   Be careful though.  The justification for hope does NOT connote the absence of risk.  While almost everyone agrees on the rate hike, there is plenty of uncertainty about how investors will be trading after it happens.  That could make for a decent amount of volatility in mortgage rates heading into the end of the year.

Housing-Specific Highlights From The Past Week

In an always-interesting quarterly recap, the MBA noted that mortgage production profits declined from Q2 to Q3, but remained substantially higher than Q3 2014.  Total Production Expenses increased to an eye-watering $7,080 per loan!

The week’s “drama quota” was easily filled by a relatively sensational story from the New York Times.  It drew upon plenty of objective data regarding the efforts of the MBA and others to reform the secondary mortgage market, but alleged that the efforts amounted to an assault on smaller originators and  suggested the revolving door between Washington and the mortgage industry constitutes a conflict of interest.

While Fannie Mae’s headline Home Purchase Sentiment Index remained in relatively strong territory this week, the key takeaway was found in the internal data where we see fewer sellers who consider this a “good time to sell.”

The always robust monthly Mortgage Market Monitor is out this week.  Black Knight points out that the recently-expanded high LTV offerings from Fannie and Freddie have done little to detract from FHA market share in the low-down-payment market segment.   The chart breaking down credit scores tells an interesting story.  It’s surprising to see FHA/VA still accounting for 20% of high LTV originations for high credit score borrowers.