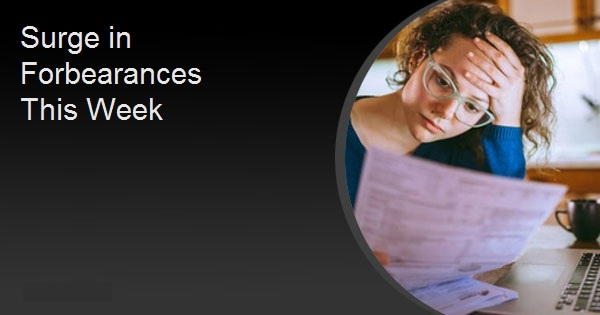 Surge in Forbearances This Week

After three weeks of declining totals, Black Knight says the number of active COVID-19 forbearance plans shot up over the past week. As of June 23, there were 4.68 million homeowners in forbearance, an increase of 79,000 from the prior week. This surge erased about half of the improvement the company has noted in its weekly report since forbearance plans peaked during the week of May 22.

Forbearance plans are now in place for 8.8 percent of all active mortgages, up 0.1 point in a week. These loans have an aggregate balance of $1.025 trillion.

FHA and VA loans posted the largest increase, 42,000, bringing the total number of forborne loans to 1.925 million or 12.5 percent of the two portfolios. Among loans serviced for Fannie Mae and Freddie Mac, 1.925 million or 6.9 percent are in plans, up 25,000 from the prior week. Loans serviced for private label security investors and bank portfolios include 1.249 million or 9.6 percent that are in plans, with week-over-week growth of 12,000 loans.

The Federal Housing Finance Agency (FHFA) has capped the advance P&I payments on behalf of GSE-backed loans at four months. Given today's number of loans in forbearance, servicers of those loans still could be required to pay up to $8.4 billion in advances over that four-month period. There is no cap on the T&I obligations.