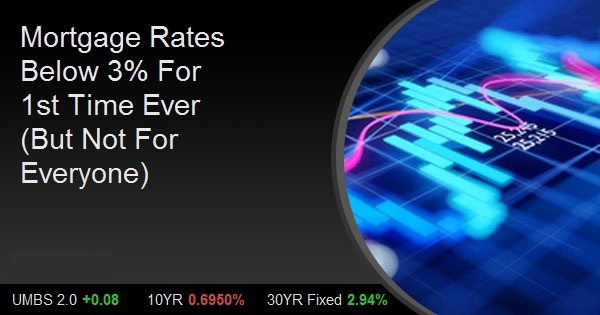 Mortgage rates plunged well into new all-time lows today.  This is a striking turn of events given the vastly different outlook at the end of last week.  Specifically, a series of strong economic reports led to significant losses in the bond market (which implies higher rates) and gains in stocks.  The unspoken warning was that rates had been too complacent in the face of a potential economic rebound.

Now this week, markets are singing a different tune.  Recently strong economic data was all well and good, but with covid-19 numbers spiking in several states, the sustainability of the economic improvement is in question.  That sentiment shifted at the same time that the stock market gave signals that it had improved about as aggressively as it was going to improve for now.  The result was the biggest sell-off since March (for stocks).  It also makes this the worst week for stocks since then.  At the same time, the bond market is having its best week since then, and again, when the bond market is doing well, rates are falling.

The average lender is now easily able to offer rates under 3.0% for ideal conventional 30yr fixed scenarios.  There is still a fair amount of variability between lenders and even more of a difference between various types of loans and borrowers.  For instance, if you're looking for a cash-out loan on an investment property and you have a credit score in the 600s, you'll have a hard time finding a loan, period.  You can't even dream of sub-3% rates in that scenario, and if you find something under 4%, you'll likely have a big upfront buydown/discount to pay.

Now for the burning question: how much lower will rates go?

Listen to me now and believe me later: no one knows.  Many can guess.  Few of those guesses are worth anything.  SO many "experts" expected rates to get a bit lower the last 2 times we hit all-time lows.  That will always be the case.  It's the case now too.  Rates may indeed be able to press further into new lows, but at some point, the lowest rates of all-time will be behind us for a period of many months or years.  Whether or not today's lows fit that bill remains to be seen.  There's no strong reason to bet on it one way or the other at this point.