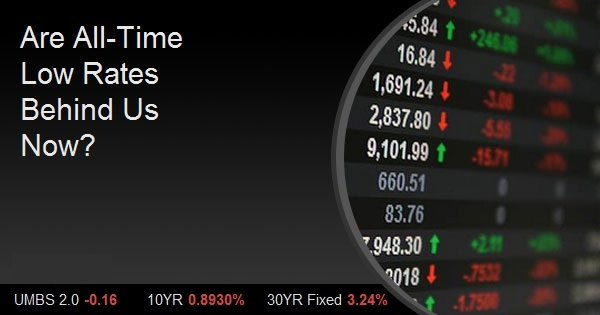 Are All-Time Low Rates Behind Us Now?

Things are quickly getting interesting for mortgage rates, and by 'interesting,' I mean potentially alarming.  Everything's relative though, so it should be said right up front that the average mortgage rate is still only a hop and a skip from the all-time lows seen last week.  But the recent past and present are old news when it comes to discussing rates and financial markets, right?!  We want to know what the future holds!

Up until this week, there was a fairly even balance of opinion among analysts, economists, and mortgage market stakeholders.  It was and still is perfectly valid to believe rates have an equal chance of pecking away at new all-time lows versus embarking on a journey back toward much higher levels.

That said, those who saw equal chances of higher vs lower rates are being forced to question their resolve after the past 3 days of economic data and market movement.  Reason being: the data suggests an economic recovery is off to a much faster start than expected.

This began on Wednesday with a jobs count from payroll processor ADP that was staggeringly higher than expected.  Ironically, this was the 2nd worst ADP Employment report in history.  Only last month's was any weaker, and it was only due to that weakness that economic forecasters were able to miss the mark so egregiously this month.  Specifically, they saw ADP's job count declining by another 9 million on top of last month's 20 million decline.  As it happened, only 2.76 million payrolls were lost.

There is plenty of analysis and criticism on the topic of the ADP report and its historical correlation with the all-important payroll count in the government's big jobs report (almost always released 2 days after ADP).  But when ADP is THAT far from forecasts, investors can't help but expect some drama in the official jobs report.  That instinct was vetted this morning when the jobs report absolutely demolished its forecast with payrolls RISING 2.5 million versus a forecast calling for a drop of 8 million.  This is by far and away the biggest gap between an actual payroll count and a forecast in the history of this data, and we may never see a similar gap again.

So what's the big deal for mortgage rates?  Rates are based on mortgage-backed bonds.  These bonds typically move in similar fashion to US Treasuries.  When the economic outlook improves, stocks tend to improve while bonds suffer.  "Suffering" in the bond market means lower bond prices and higher yields.  "Yield" is just another word for "rates."  Long story short, stronger-than-expected economic data means upward pressure on rates, all other things being equal.

That's about as well as questions about the future of rates can be answered.  If the economic data continues to be much stronger than expected, there's a very real chance that all-time low rates are behind us for now.  But do keep in mind that such comments are only ever as good as the data we currently have available.  Markets are reacting to extremely positive economic surprises this week.  Something else could be happening next week.  Things can and do change ALL the time when it comes to financial markets.

Even if things don't change, there are a few things to remember.  First off, mortgage rates are still very close to all-time lows in the bigger picture.  So there's still time to take advantage of this historic opportunity if you haven't already.  Mortgage rates have largely lagged the extreme moves seen in the US Treasury market for reasons unique to the coronavirus response.  This means they have a bit of a cushion to absorb some of the current upward pressure.  While that won't prevent them from moving higher, it can make the move less intense than it otherwise would be.