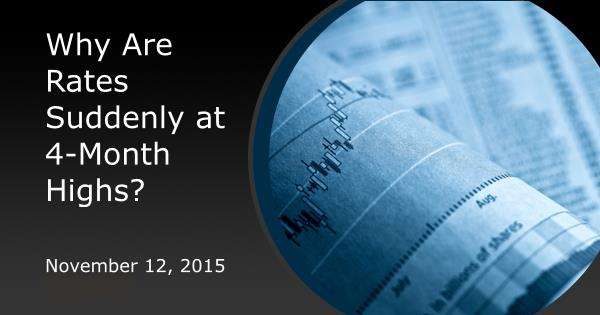 Why Are Rates Suddenly at 4-Month Highs?

After the abrupt rise in May and June, mortgage rates have enjoyed an extended period of low volatility and consistent improvement.  In fact, by October 27th, the average lender was quoting their best rates in 6 months.  Why then, did they wind up at 4-month highs less than 2 weeks later?

As I’ve mentioned over the past 2 weeks, the Fed Announcement on October 28th was the primary catalyst for the recent rate spike.  It caused a rapid shift in the calm, positive trend.  It continues to be a potential game-changer for the mortgage rate environment heading into the end of the year.

Even when the Fed doesn’t have the spotlight, Fed-related considerations are still moving markets.  Last Friday’s jobs report is a great example.  The Employment Situation (frequently referred to as the jobs report, NFP, or nonfarm payrolls) is the most important piece of economic data in the US.  It is fully capable of influencing interest rates on its own.

In Friday’s case, the jobs report was doubly important because it was the last refuge of those who didn’t think the Fed was likely to hike its policy rate in December.  The logic is simple: stronger job creation = higher likelihood of a Fed hike.

Over the past few weeks, several Fed speakers had been reminding markets that it would only take job creation in the 100-150k range to reinforce the rate hike timeline.  Some sceptics concluded that the Fed had early access to the data and was trying to prepare markets for a low number.

When payroll creation came out at 271k, all manner of critics were silenced.  Odds of a December rate hike moved quickly higher, as did most domestic interest rates.  This is why rates made an additional, abrupt move to 4-month highs last Friday after they looked to be leveling-off just a day before.

Trading levels began holding their ground on Tuesday.  This is a pretty quick bounce, and it could signal some measure of exhaustion in the market’s effort to push rates higher (that’s a good thing).  Even then, lenders have been reluctant to pass along the market gains in the form of lower mortgage rates.  This reluctance could continue to be a problem with a likely Fed rate hike now just over a month away.

In industry-specific news, the Mortgage Bankers Association notes that the rise in rates has yet to translate to a big drop in mortgage applications.  Given the tendency for the MBA’s app survey to lag late-week rate movement, it wouldn’t be a surprise to see things slow down next week in terms of refi numbers.

Fannie on the other hand, notes that the rising rate environment is already having an impact on its Home Purchase Sentiment Index.  A majority of those surveyed expect rates to rise over the next year.  While consumer surveys have little to do with where rates actually go, if more consumers fear higher rates in the future, it can paradoxically serve to bolster purchase demand in the short term.

On a final note, as we discussed 2 weeks ago, Freddie Mac’s weekly mortgage rate survey was likely to reflect the recent rise in rates.  As it turns out, the survey now shows the sharpest two week increase of the year, rising by 22 basis points from 3.76 to 3.98.