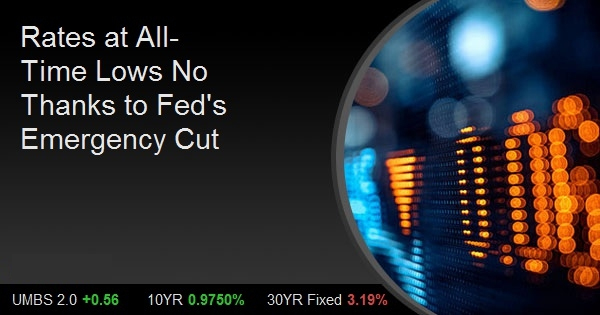 Rates at All-Time Lows No Thanks to Fed's Emergency Cut

This is mostly a reprint of a piece I wrote earlier today for the MBS Commentary channel.  If you read that one, you've basically already seen what follows

The Fed announced an emergency rate cut of 50bps today (0.50%).  Great!  So your mortgage rate could be 0.5% lower, right?  Not exactly...  Rates definitely moved lower today, and the Fed was definitely involved in that, but more so because their surprise rate cut proved to disillusion financial markets, thus setting off a wave of panic that benefited bonds.  Excess demand for bonds means lower mortgage rates (all-time lows, by the end of the day).

The fear among market participants was that a surprise cut such as this would sooth markets and actually put upward pressure on mortgage rates.   Yes, I just said that a 0.50% drop in the Fed Funds Rate could have pushed mortgage rates higher.  Confused yet?

Let's start here: THE FED DOESN'T SET MORTGAGE RATES.  It's that simple.  More specifically, the Fed Funds Rate doesn't translate to mortgage rates, even though many aspects of Fed policy can have profound effects on all kinds of rates (including mortgages).  This is a topic that comes up time and again in my mortgage rate coverage.  These are just a few recent examples:

There are 3 key ways to understand the paradox.

1. The Fed Rate is a Battleship in a River

The Fed meets to MAYBE change its rate only 8 times a year, barring emergencies (like today).  Mortgage-backed bonds and Treasuries, on the other hand, can change thousands of times a day.  Mortgage lenders update rate sheets at least once every business day.  In short, mortgage rates and the bond market are FAR MORE NIMBLE than the Fed and, to whatever extent they are going to take guidance from a Fed rate decision, they ALWAYS move WELL in advance because Fed rate changes are very well-telegraphed these days (even today's emergency cut).  Bottom line, mortgages react to the Fed rate cut BEFORE it ever happens, but even then, a Fed cut might not convince mortgage rates to move lower due to the other 2 factors.

2. The Fed Rate is a Different Animal Compared to Mortgage Rates

The Fed Funds Rate applies to loans with a term of up to 1 day (essentially last minute money shuffling between banks in order to ensure everyone has the money they need for the day if the previous day happened to create an imbalance).  Mortgages, of course, can be loans of up to 30 years.  Quite simply, investor preferences can vary greatly depending on the duration of a loan.  If you've heard about the inverted yield curve, that's a quintessential example of shifting investor preferences between longer and shorter term debt.  It doesn't get any shorter than the Fed Funds Rate nor much longer than mortgage rates.  Consequently, they move in opposite directions all the time.

3. Fed Policy is About Much More Than The Rate Itself

The Fed Funds Rate is only one of the aspects of the Fed's monitor policy communication.  Markets care about it, but again, they usually know what it's going to be ahead of time.  Even then, markets typically care much more about how the rate will move in the future. To that end, they're very focused on the economic realities that are likely to shape future Fed moves.  Markets also care quite a lot about any changes in the Fed's bond buying plans, and we didn't see that today.

If you take nothing else away from the above, take this: the bond market (which includes mortgages rates) has been able to react to coronavirus implications for weeks, and there's been no Fed meeting during that time.  It took an emergency, unscheduled rate change for the Fed to even bring itself into line with market expectations.  They're a battleship in a river, and that river has been swift.

Let's prove all this with charts.  The most obvious and most compelling is simply the futures contract for the Fed Funds Rate in April.  It allows markets to bet on the level of the Fed Funds Rate by the end of the month.  As of last Friday, traders were already fully betting on a 0.50% drop (i.e. the one we just saw today). 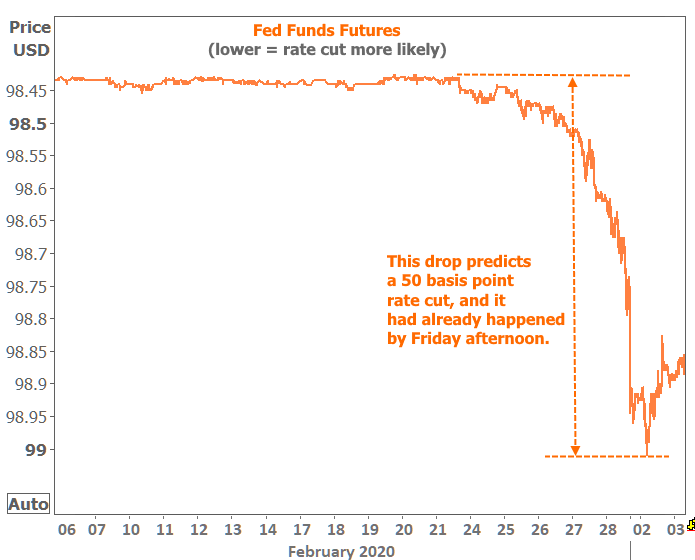 And how about some historical charts showing mortgage rates completely ignoring (or leading) the Fed?  In all of the following, the Fed Funds Rate is in blue and the daily average mortgage rate is in orange.

First up, take a look at these massive swings in mortgage rates.  More than anything, this serves as a reminder about just how many other things the mortgage market can have on its mind BEYOND the Fed Funds Rate.  The big drop was due to the European credit crisis and the big bounce happened when the Fed said it would stop buying so many bonds. 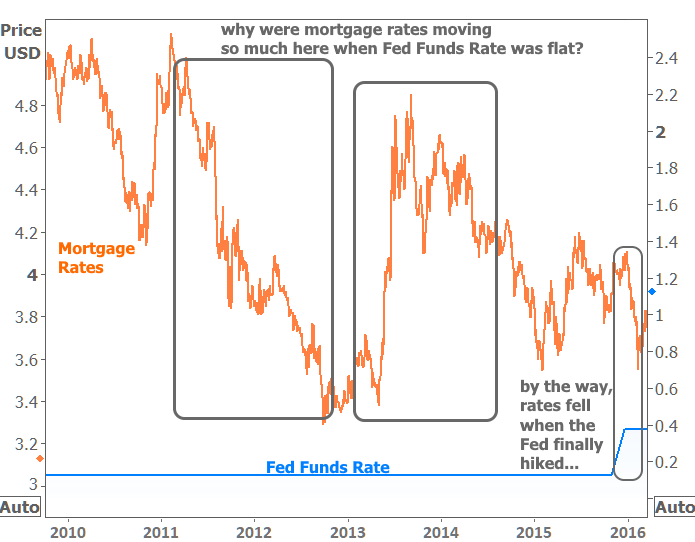 In 2017, the Fed's rate hike cycle was underway.  Mortgage rates were already positioned for that and were thus able to move lower, even as the Fed raised rates. 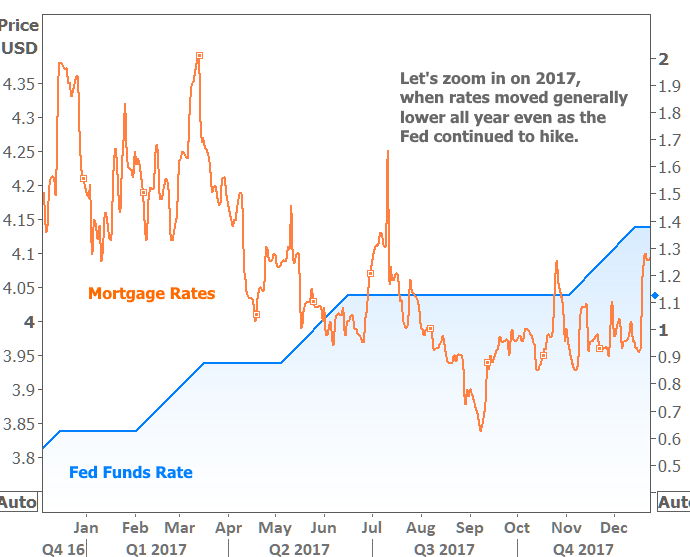 Similar story in 2018/2019 where mortgage rates had been very high and then saw the writing on the wall with respect to the Fed being unable (or unwise) to continue hiking rates.  Mortgages began falling/correcting back toward lower levels.  It was as if they were betting on the Fed's next course of action (or betting on the economic realities that would inform the Fed's next course of action).  They were right!  And eventually, the Fed did indeed cut rates several times. 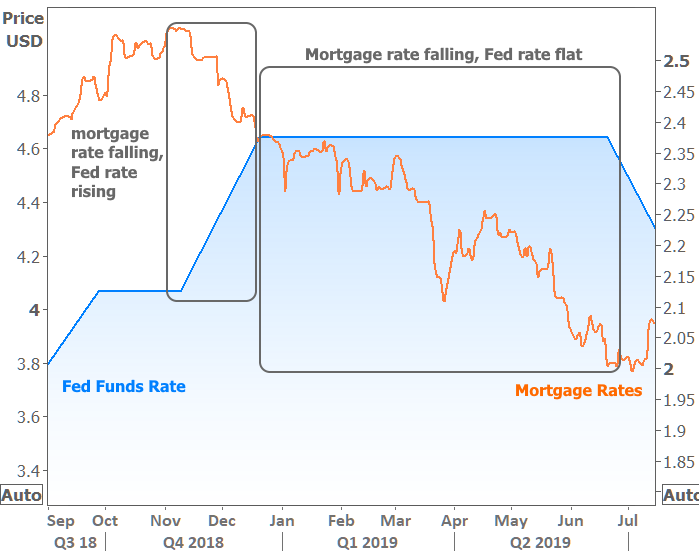 Last but not least, how about rising rates during a Fed rate cut cycle?  That's exactly what we saw at the end of 2019.  The reason?  Mortgage rates were able to move lower in a major way in response to the trade war.  They went as far as they were willing to go and then had nowhere to go but up.  Meanwhile, the Fed was still slowly responding to the last time its Fed Funds Rate was too high (and finally wrapping up their rate cut campaign).

Bottom line: mortgage rates can move for weeks and weeks before the Fed ever has a chance to move.  Moreover, financial markets instantly "price-in" expected Fed rate cuts/hikes, and today's cut was widely expected (and unequivocally traded, based on the first chart above).

Mortgage rates are indeed very low, but they are not now, nor will they be 50 basis points lower due to today's Fed rate cut.