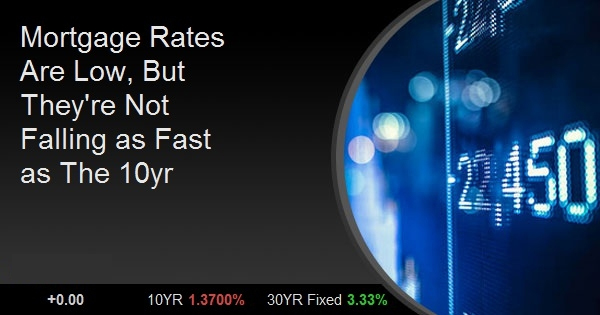 Mortgage Rates Are Low, But They're Not Falling as Fast as The 10yr

Mortgage rates have been putting on a rather frustrating and exciting show in the month of February.  On the one hand, they're at their lowest levels since 2012 and are off to their strongest start of any year on record.  On the other hand, they're not nearly as low as you'd expect them to be based on movement elsewhere in the interest rate world. In fact, even on a day like today where the mighty 10yr Treasury yield (something that a lot of people mistakenly view as the basis for mortgage rates) precipitously fell to new all-time lows, many mortgage lenders were offering the same rates as yesterday.  More than a few were offering HIGHER rates.  What's up with that?!

It's certainly true that the 10yr yield sets the tone for mortgage rates better than any other mainstream rate.  Treasuries set the tone for all manner of rates in the US, in fact.  They serve as the most basic expression of borrowing money in America.  After all, Treasuries are simply loans taken out by the US government.  Lend to anyone else beyond Uncle Sam and you'll be compensated with slightly higher interest and a slightly different set of risks (Treasuries are considered "risk-free," and I'd agree with that for all practical purposes.  Point being, sure, there's a risk the government might not pay you back, but in a world where such a thing is actually possible, receiving loan payments will be the least of your concerns).

Either way, Treasuries carry the lowest risk of default.  They've been around the longest.  Their borrower has deeper pockets than anyone you know.  The market for them is bigger than for any other loans.  Simply put, they set the tone for everything else.

To use an analogy I've used in the past, the 10yr yield is like an aircraft carrier and other rates are like planes, helicopters, soldiers, rafts, boats, and unmanned submersibles that are along for the ride.  At any given time, mortgage rates may or may not be on the deck of the USS 10yr Yield, but as long as the seas are calm, they're generally not far.

In rare cases, the USS 10yr can move too quickly or erratically for mortgages and the latter can jump ship and opt to follow along in their own little row boat.  The faster the big boat moves and the more erratically it moves, the harder it is for the little boat to catch up.  If things are crazy enough, the little boat may just camp out on a convenient nearby desert island until the volatility blows over.  That's basically where we are now when it comes to the mortgage vs Treasury relationship.

Of course there are factual and objective underlying reasons for this, but it's much easier to understand in terms of the analogy.  The net effect is that the bonds that actually dictate mortgages (Mortgage-backed-securities or MBS) haven't improved nearly as quickly as 10yr Treasuries.  Moreover, lenders themselves are hesitant to drop rates too quickly because doing so will lead to more of those "factual and objective underlying reasons" for the underperformance mentioned above

For those who simply must attempt to understand the nitty gritty details, this is about as simply as I can put it: most of the time, the average mortgage is only profitable to investors if it lasts.  The quicker mortgages are paid off, even if via refinancing, the less valuable they are to investors.  When investors pay less for mortgages, it puts upward pressure on rates.  That upward pressure can be big enough to offset the downward pressure coming from the general improvement in the bond market.  In other words, the mortgage market's rowboat can temporarily move in the opposite direction from the aircraft carrier.  The net effect of that net effect is that mortgage lenders simply don't have much to work with when it comes to pushing rates any lower.  Even if they did, it would still be slow going because mortgage lenders have a similar relationship with MBS as MBS have with Treasuries.

Bottom line: rates aren't as low as you think they should be if you're a person who follows the 10yr.  And it's going to take weeks if not months for the mortgage market to hop in its dinghy and row row row back toward the big boat.

Bond yields continued touching all time lows Tuesday, as further global corona virus contagion concerns surfaced.  Mortgage rates drop far slower than actual bond yields at times like this, but pricing is still near 2012/2016 lows.  I'm not in a hurry to lock here, given that no immediate solution seems likely and rate sheets are lagging markets.  Locking loans closing within 30 days, but floating those closing further out. - Ted Rood, Senior Originator

Record low Treasury yields are dominating headlines today. They plunged yesterday and today, but mortgage rates/pricing improved only slightly over the same time frame. In highly volatile times like these, mortgage rates simply do not keep pace with Treasury yield movement. Normally, yes they track pretty closely with one another, but for the time being Mortgage Bonds have taken shelter and are in wait-and-see mode while the broader bond market storm rages. Stay tuned for updates. -Timothy Baron, Senior Loan Officer NMLS 184671, NOVA Home Loans NMLS 3087