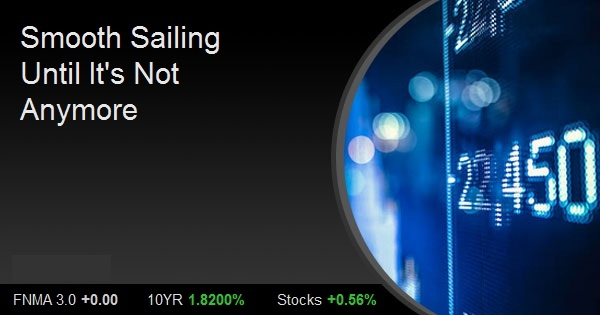 Smooth Sailing Until It's Not Anymore

Mortgage rates had been moving higher over the past few days.  The average lender was at the highest levels of the month as of yesterday morning, but things began to change shortly thereafter.  Today's market movement added to the friendly momentum after the big jobs report came out slightly weaker than expected (in general, weaker economic data is good for rates).  By the end of the day, the average lender had erased yesterday's weakness, but didn't quite make it back to the levels seen on Monday and Tuesday.  That said, I'm splitting hairs by pointing out any difference between the two.

The bigger picture continues to be the more interesting point of consideration.  For every rate-friendly anecdote there's an equal and opposite counterpoint at the moment.  This jives perfectly with the intensely sideways bigger picture pattern of the past few months, but it does nothing to suggest when it may end or WHY it may end.

One logical guess is that a shift in the economic data will be the culprit, but that really depends on the market's ability to separate such a shift from the distortions we expect to see as trade barriers between the US and China are raised and lowered.  These have far reaching implications for the domestic and global economies and they'll make it a chore to separate the long-lasting momentum from temporary fluctuations.

For now though, the average 30yr fixed rate is well under 4% and that's been the case for nearly half a year.  It's smooth sailing until it's not anymore!