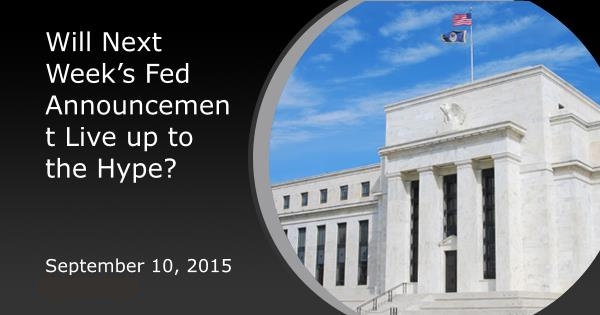 Will Next Week’s Fed Announcement Live up to the Hype?

This past week has existed almost exclusively in the shadow of next week’s Fed Announcement.  Whether we’re drawing conclusions about the limited amount of economic/housing data or simply considering mortgage rate movements, everything has been “less intense” than it otherwise might be.  Even the mighty Jobs Report on Friday failed to stir financial markets as they wait to see if the Fed will hike rates next Wednesday.

This is a normal expression of market sentiment when a major piece of information is on the horizon.  It’s especially normal when that big piece of information could send rates quickly higher OR lower.  The lack of movement is their way of staying prepared for either outcome.

US Treasuries are the biggest kids on the interest rate playground.  They serve as the benchmark for most other interest rates in the US.  This includes mortgage rates, albeit indirectly.  Mortgage rates are based on the prices of mortgage-backed-securities or MBS.  It’s these MBS that share the proverbial playground with Treasuries.  Like most other bonds, they tend to move in the same direction as Treasuries, but at a slightly slower pace.

In other words, if something happens that impacts rates in the US, Treasuries tend to feel it first.  There are notable exceptions though.  QE3 was a great example because it specifically targeted MBS for a new round of Fed bond buying in September 2012.  In that case, mortgage rates absolutely led the charge lower.

Taking this concept a step further allows us to pose a question about next week’s Fed Announcement.  We can take that step by considering the differences in the behavior of short term vs long term rates.  For instance, 2yr Treasuries often move at a distinctly different pace vs 10yr Treasuries, and sometimes even in opposite directions.   The Fed Funds Rate (the thing that might be raised next week for the first time in 9 years next week) is an even shorter term rate.  In fact, it pertains only to overnight lending rates.

With that in mind, we’re ready for the question: will mortgage rates even take much of a hit if the Fed raises rates?  After all, the average mortgage lasts about 7 years and tends to behave more like a Treasury note of a similar life-span in terms of how it reacts to news and events.

The answer is a resounding “maybe!”  The whole financial world is operating in uncharted waters here.  Indeed it’s true that longer-term rates, like mortgages, have fared much better than shorter term rates during the time that the Fed has been telegraphing the first rate hike.  But there’s been so much telegraphing that rates of all shapes and sizes have already had a good opportunity to adjust for the potential changes.

History shows us that longer term rates tend to rise in concert with short term rates,  but there are instances as recently as 2004 when long term rates braced for impact from an expected Fed hike only to fall when the Fed actually pulled the trigger.  In that case, the Fed hike had the biggest impact on longer term rates BEFORE it actually happened.  There’s no question that much of 2015’s general move higher in rates has happened for the same reasons.

Such counterintuitive conclusions only add to the recent paralysis.  All we really know is that rates will probably be making bigger moves next week, but the direction is anyone’s guess.

Economic/Housing Data Recap From the Past Week

Friday’s jobs report was weak at face value, with payroll creation coming in much lower than expected.  The rest of the report helped offset the headline though.  Unemployment was down to 5.1, and it got there without the normal caveat of lower labor force participation.  Wage growth was also stronger than expected—a sticking point for many labor market critics.  Finally, the revisions to the previous 2 reports nearly offset the loss of payrolls in the current report.

Apart from that, data has been limited this week.  Fannie Mae unveiled a welcome update to its National Housing Survey that will make the data much more accessible to the average reader.  Black Knight examined the burgeoning “tappable equity” in the housing market, along with the fact that it’s not yet being tapped.  Corelogic released reports on both Foreclosures and Distressed Sales.  The Mortgage Bankers Association noted a sharp bounce back in last week’s mortgage application surge, and originators are gearing up for the implementation of FHA guideline changes that take effect next week.