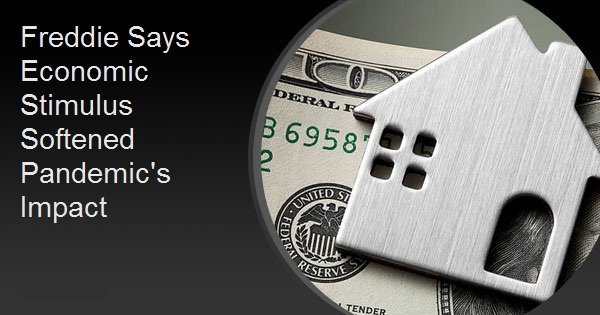 Freddie Mac's Economic and Housing Research Group says say that, heading into summer, the housing market is rebounding from the COVID-19 pandemic's damage faster than expected. Purchase demand is recovering, and any home price response has, so far, been muted. Still, the company's quarterly forecast is much more uncertain than usual.

The report credits the government's stimulus with cushioning the pandemic's impact on consumers in the short term, however, there has still been tremendous damage to the labor market and to small businesses. The extent of that impact is still unfolding.

The wages and salaries component of income fell 8 percent in April, the largest monthly drop since data collection began in the 1950s. The CARES Act and the stimulus it authorized led to a $3 trillion or 90 percent increase in government income transfers to consumers and more than offset the decline in wages. The result was an 11 percent increase in personal income, the largest on record.

That increase however didn't stop consumer spending from falling by 14 percent in April. This was accompanied by a huge spike in the savings rate which jumped from 12.7 percent in March to a record setting 33 percent in April.

Unemployment jumped to 14.7 percent in April but eased back to 13.3 percent in May as 2.5 million new jobs were reported. The Bureau of Labor Statistics (BLS), however, admitted that there should probably be asterisks on their numbers. Misclassification of many jobs, BLS said, may have subtracted as much as 3 percentage points from the actual unemployment rate. In any case, employment remains 20 million below the February level and will take an extended period of time to recover.

The Fed is urging bold action going forward, warning that the economic impact from COVID-19 is "without modern precedent." It has made two emergency rate cuts to the federal funds to a range of 0 to 0.25%, citing the disruptions and economic damage caused by COVID-19. Mortgage rates fell to all-time lows in April and May and remain extremely low. Freddie Mac is forecasting an average rate of 3.4 percent this year and 3.2 percent in 2021.

Housing market data turned negative in late March and grew worse in mid-April but has since been rebounding. Freddie Mac says there are still great unknowns about the evolution of the recovery and future policy response, so its outlook for the housing market is cautiously optimistic.

Purchase applications reached the second highest weekly level of the year in June, rising 12 percent year-over-year. Freddie Mac says the rebound from April, when purchase activity was down 30 percent, is remarkable. It took more than 10 years for purchase demand to return to normal, after the Great Recession but only 10 weeks in this recovery.