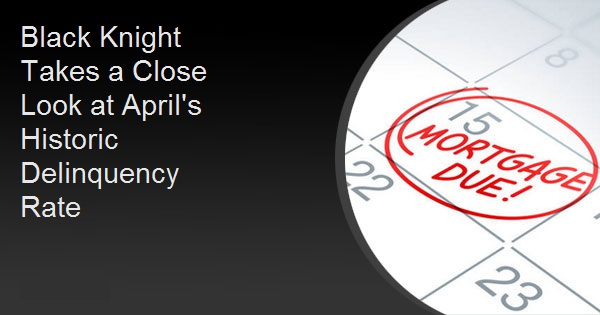 Black Knight says that only three months after the national delinquency rate hit a record low, falling 1.5 percentage point below its pre-Great Recession average in January, it skyrocketed to 6.45 percent. This is a 3.1 percent change in April alone, the largest single-month increase on record and nearly triple the previous record, a November 2008 surge. During the Great Recession it took two years for the delinquency rate to increase this much and the company says it could climb still higher when the May numbers come in. Each of the 100 largest metro areas saw at least a 1-point increase in its delinquency rate, but there was a lot of variation. Non-current loans jumped by 7.2 percent in Miami and 6.2 percent in Las Vegas, each twice the national gain. Many of the increases in Midwest areas were well below the national average.

Much of the current issue of Black Knight's Mortgage Monitor deals with the status of COVID-19 forbearance plans of which there are currently 4.75 million. We have regularly covered the company's reporting on this, so we will only touch briefly on some the more granular details on forbearance in the Monitor, focusing in particular where those details intersect with information on mortgage delinquencies.

The company reports mortgages as delinquent when a payment is missed, even if the borrower is in a forbearance plan and many of those who are (53 percent in April) continued to pay their mortgages. Thus, you have 4.25 million plans but only 3.60 delinquent borrowers. By May 26 only 22 percent of those in plans had made their May payments. Of the total number of delinquent borrowers, 1.4 million were already non-current in February and only 33 percent of this group had entered forbearance by the end of April, leaving 930,000 who were past due on their loans but not forborne. Another 2.2M homeowners became past due over March and April, with 85% of those new 'post-COVID' delinquencies entering forbearance and 330K not yet in forbearance as of April 30. Black Knight says each of these categories needs to be assessed individually from a risk perspective. Among loans in forbearance, those on properties worth less than $100,000 have a delinquency rate of 9.4 percent, three times the rate of those worth a million dollars or more. However, the most significant upticks in delinquencies have been among those where property values are between $400,000 and $500,000. This is true regardless of the investor type and geographic regions. Black Knight says this suggests that the expanded unemployment benefits enabled by the CARES Act may be helping lower-income homeowners meet their obligations while not fully doing so for higher income workers. However, that the largest volume of new delinquencies has occurred among moderate priced homes also reflects that there are more of them.

Most of the homeowners in forbearance have strong equity positions. Only 9 percent, about 446,000, have combined loan-to-value ratios (CLTV) of 90 percent or higher with 1 percent underwater. The share of low equity loans is higher, 19 percent, among loans serviced for Ginnie Mae (VA and FHA loans). In fact, Ginnie Mae's loans make up about two-thirds of all 90 percent LTV loans even though they make up only one-third of all loans in forbearance.

These homeowners with little wiggle-room in their mortgages are at a higher risk of not being able to get back on track once forbearance ends and thus face a greater chance of losing their homes. But even when that lens is narrowed to those in forbearance who did not make their April payment, only 235,000 or 10 percent fall into a near negative equity category.

Eighty percent of forborne homeowners have a CLTV of 80 percent or less and 60 percent have 70 percent or less. This gives them as well as servicers, investors, and policymakers greater flexibility in helping to avoid foreclosures and default-related losses. With interest rates now down to around 3.15 percent, Black Knight also took another look at the refinanceable population. At that rate it estimates almost 14 million mortgaged homeowners have an incentive to refinance (able to shave at least 75 basis points off their current mortgage) and the ability to do so. However, the COVID-19 crisis means that about 4 percent of homeowners who might otherwise have met refinancing criteria, a 720 or higher credit score and an LTV of 80 percent or less, can no longer refinance due to delinquency. Three percent are in active forbearance and past due on their mortgage, 0.5 percent are delinquent but not in forbearance. Another 4 percent are in forbearance but made their April payment meaning they still might be eligible for a loan.