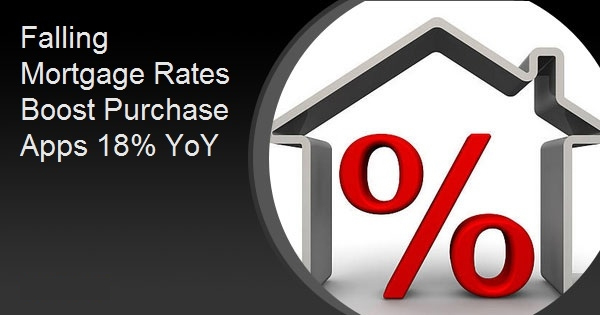 Refinancing volume continued to slide but purchase mortgage activity partially compensated during the holiday shortened week that ended May 29. The Mortgage Bankers Association (MBA) said its Market Composite Index, a measure of mortgage loan application volume, decreased 3.9 percent on a seasonally adjusted basis from one week earlier. On an unadjusted basis, probably due to the holiday, the Index was down 14 percent.

Refinancing slipped another 9 percent although it remained 137 percent higher than the same week one year ago. Over the last seven weeks the Refinancing Index has lost an aggregate of 30 percentage points. The refinance share of mortgage activity decreased to 59.5 percent of total applications from 62.6 percent the previous week.

The Purchase Index posted its seventh straight gain, a 5.0 percent increase on a seasonally adjusted basis but was down 7 percent unadjusted. Purchase activity is now 18 percent higher than the same week in 2019.

"Purchase applications continued their recent ascent, increasing 5 percent last week and 18 percent compared to a year ago. The pent-up demand from homebuyers returning to the market continues to support a recovery from the weekly declines observed earlier this spring," said Joel Kan, MBA's Associate Vice President of Economic and Industry Forecasting. "However, there are still many households affected by the widespread job loss and current economic downturn. High unemployment and low housing supply may restrain a more meaningful rebound in purchase applications in the coming months."

Added Kan, "In contrast to the upswing in purchase activity, refinance applications fell for the seventh consecutive week - even as the 30-year fixed rate hit another MBA survey-low of 3.37 percent. After reaching a peak of 76 percent earlier this year, refinances now account for less than 60 percent of activity, and the index is now at its lowest level since February 21."

Interest rates were lower for all contract rates except FHA loans. The effective rate rose for both FHA and adjustable rate mortgages (ARMs).

The average contract interest rate for jumbo 30-year FRM, loans with balances exceeding the conforming limit, was 3.66 percent with 0.30 point. The prior week the rate was 3.71 percent with 0.29 point.

Fifteen-year FRM had an average rate of 2.85 percent, down 2 basis points from the prior week. Points decreased to 0.27 from 0.30.

The average contract interest rate for 5/1 adjustable rate mortgages (ARMs) decreased to 3.05 percent from 3.08 percent, with points increasing to 0.25 from 0.01. The adjustable-rate mortgage (ARM) share of activity increased to 3.5 percent of total applications from 3.4 percent the previous week.

MBA's latest Forbearance and Call Volume Survey found that, as of May 24, there were 4.2 million mortgage loans in COVID-19 forbearance plans. This is 8.46 percent of servicer portfolios, up from 8.36 percent the previous week and the smallest increase reported since the week of March 9.

"MBA's survey continues to indicate that fewer homeowners are seeking forbearance as more states across the country reopen their economies and prospects begin to improve. The share of loans in forbearance increased by only 10 basis points over the week of May 24th," said Mike Fratantoni, MBA's Senior Vice President and Chief Economist. "Policy support for households, including expanded unemployment insurance benefits and other transfers, have helped many stay on their feet during this crisis."

Added Fratantoni, "Forbearance requests and call volume declined relative to the prior week and led to further declines in wait times and abandonment rates."

Loans backed by Ginnie Mae (FHA, VA, and USDA mortgages) again had the largest share of loans in forbearance at 11.82 percent. They also had the largest week-over-week increase among investor types, 22 basis points. The share of Fannie Mae and Freddie Mac loans in plans grew 3 basis points to 6.39 percent and loans serviced for others such as private label securities investors rose from 9.54 percent to 9.67 percent.

The number of loans in forbearance for depository servicers was 9.19 percent, a 6-basis point uptick, while the percentage for independent mortgage bank (IMB) servicers increased 10 basis points to 8.21 percent.

Forbearance requests as a percent of servicing portfolio volume (#) dropped across all investor types for the sixth consecutive week: from 0.28 percent to 0.20 percent. Call center volume decreased from 8.6 percent of servicing portfolio volume (#) to 6.6 percent - the lowest since this survey series began in the week of March 2.

MBA's latest Forbearance and Call Volume Survey covers the period from May 18 through May 24, 2020 and represents almost 75 percent of the first-mortgage servicing market (37.6 million loans).