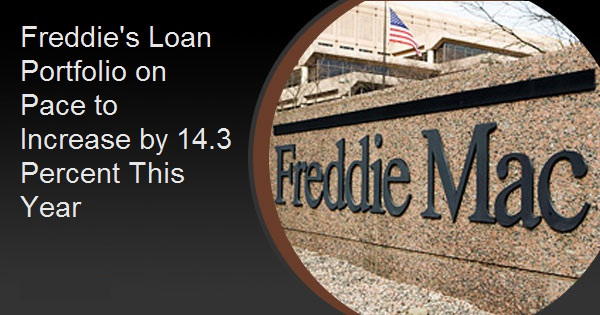 Freddie's Loan Portfolio on Pace to Increase by 14.3 Percent This Year

Freddie Mac reported this week that its total mortgage portfolio increased at an annualized rate of 14.3 percent in April, up from a 9.2 percent gain in March and the largest rate since December. The portfolio balance at the end of the period was $2.396 trillion compared to $2.368 trillion at the end of March and $2.216 trillion a year earlier. The growth rate for the year to date is 8.4 percent.

Single-family refinance loan purchase and guarantee volume was $52.100 billion in April compared to $33.300 billion in March and representing a 69 percent share of total single-family mortgage portfolio purchases and issuances compared to 63 percent the previous month.

The Mortgage Related Investments portfolio had a negative annual growth rate of 44.1 percent in April, compared to 53.4 percent growth in March. The annualized growth in April 2019 was (13.4) percent.

Freddie Mac's single-family delinquency rate increased by 4 basis points to 0.64 percent, leaving it 1 basis point below the rate in April 2019. The rate for credit-enhanced Primary Mortgage Insurance loans rose 5 basis points to 82 percent while the non-credit portion increased from 0.67 percent to 70 percent. The multi-family delinquency rate was 0.08 percent, unchanged from January but up from 0.03 percent in April 2019.

Freddie Mac said the measure of its exposure to changes in portfolio value averaged $63 million in April.