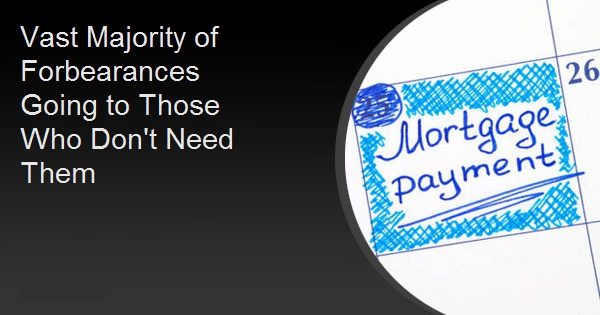 Vast Majority of Forbearances Going to Those Who Don't Need Them

With the number of homeowners under forbearance plans nearing 10 percent of all of those having a mortgage, a Lending Tree survey indicates that most of those borrowers did not actually need the help. One quarter of the homeowners surveyed by the company said they had applied for forbearance because of a COVID-19 hardship, and of those, 80 percent were granted one. However, only 5 percent said they wouldn't have been able to pay their mortgage without forbearance.

Lending Tree says that lenders typically require borrowers to prove they're experiencing a financial hardship in order to qualify for forbearance. However, the Coronavirus Aid, Relief, and Economic Security (CARES) Act passed by Congress lets homeowners with government-backed loans apply for forbearance without having to prove a hardship. This helps explain why so many people were able to get a forbearance even though they didn't necessarily need one.

Five percent of homeowners who were approved for forbearance said they wouldn't have been able to make their mortgage payment without it and 26.2 percent said they could have paid their mortgages but would have needed to skip other essential bills. Almost 70 admitted they just wanted a break from their normal payments. That response was most prevalent among Millennials and Gen Xers, at 71 percent.

While fewer baby boomers applied for forbearance, those who did were in much greater need. In fact, 20 percent of baby boomers said they needed forbearance to avoid missing their monthly payment.

Lending Tree says whether or not forbearance is needed, it may still be a good strategy for managing personal finances. We don't know how long the COVID-19 crisis will last and how deep its economic impact will be so preserving cash is a priority for many Americans. A mortgage forbearance temporarily removes mortgage payments from the equation. This pause can provide more wiggle room in homeowners' budgets until the forbearance period ends.

Nonetheless, asking for help isn't easy, and of those surveyed, 33.2 percent felt "a lot" of guilt and 38.3 percent felt "a little" about receiving forbearance. Generally, women were more likely to feel "not at all" guilty compared with men (43.8 percent versus 25.2 percent), while 70 percent of baby boomers reported feeling no guilt, compared to 30 percent of millennials and 20.4 percent of Gen Xers.