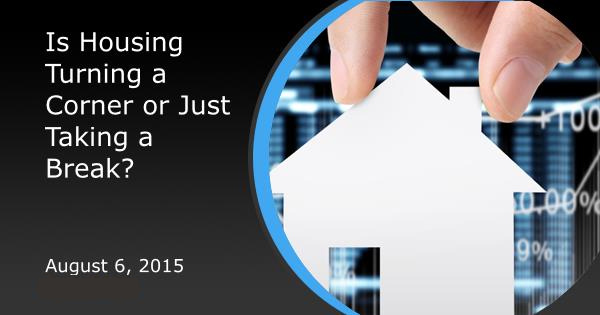 Is Housing Turning a Corner or Just Taking a Break?

Last week’s biggest housing news was that Wells Fargo is ending its marketing agreements with Realtors and builders.  While several lenders had already made such a move, Wells is a much bigger deal.  Given the bank’s prominent role in all aspects of the mortgage market, it’s safe to assume other lenders will follow the leader.

Last week also saw mortgage rates move back to the lowest levels in 2 months as recent economic data casts increasing doubt on the economic outlook.   Interest rates tend to react to changes in economic data.  If the economy is weakening or if inflation is slipping, it makes sense for investors seek the safety and the predictability of the bond market.  More demand for bonds (which includes those that underlie the mortgage market) causes rates to fall.

This week’s absence of major reports on home sales has given markets a chance to reflect on the recent trend.  Redfin provided a good assessment of the current shift in the housing market.  The conclusions are sobering, but by no means dire.  Long story short, things may be leveling off, but without the same causes for concern that were present in 2005-2006.

It’s important to note that CoreLogic is not saying that values will fall as distressed inventory bottoms out.  It’s merely one of the inputs contributing to values leveling off.  CoreLogic themselves note that other factors, such as tight inventory, continue to exert the opposite effect on prices.

There are growing questions as to whether or not this will be sustainable in the face of generally rising rates, and stagnant wages.  The economic data will be very important in determining how the rate environment will contribute to affordability.

In particular, Friday’s jobs report has the potential to cause a significant move higher or lower, relative to the average day-to-day change in rates.  In the bigger picture, it could be a key ingredient in solidifying the Fed’s intent to hike rates in 2015.  If it’s weak enough to give the Fed pause, rates could continue to fall.  As always, keep in mind that the Fed does not set mortgage rates, but changes in the Fed Funds Rate tend to coincide with the broader movements in mortgage rates over time.  The simple reason for this is that the Fed is essentially setting the cost of money.  Banks need it so they can lend it to mortgage borrowers.  If it gets more expensive for banks, those costs are passed along in the form of higher rates.