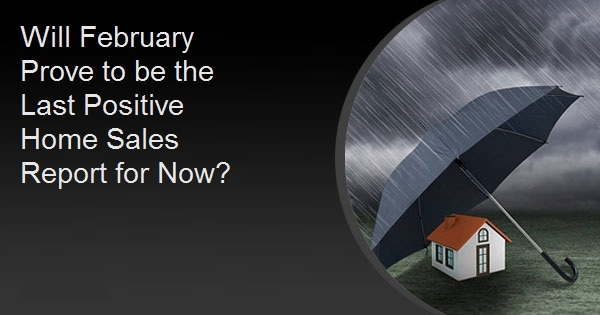 Will February Prove to be the Last Positive Home Sales Report for Now?

In what will probably prove to be the last full month of normal home sales for a while, prices of homes accelerated significantly. The S&P CoreLogic Case-Shiller U.S. National Home Price Index rose 4.2 percent in February compared to a year earlier. The index, which covers all nine U.S. census divisions, had posted a 3.9 percent annual increase in January.

The 10-City and 20-City Composite Indices had similar gains. The former was up 2.9 percent year-over-year compared to 2.6 percent in January while the 20-City's appreciation was 3.5 percent compared to 3.1 percent.

Phoenix again topped the list of 20 cities with an annual gain of 7.5 percent. It was followed by Seattle at 6.0 percent and Tampa and Charlotte, each at 5.2 percent. Seventeen of the 20 cities reported higher price increases in the year ending February 2020 versus the year ending January 2020.

"The stable growth pattern established in the last half of 2019 continued into February," says Craig J. Lazzara, Managing Director and Global Head of Index Investment Strategy at S&P Dow Jones Indices. "The National Composite Index rose by 4.2 percent in February 2020, and the 10- and 20-City Composites also advanced (by 2.9 percent and 3.5 percent, respectively). Results for the month were broad-based, with gains in every city in our 20-City Composite; 17 of the 20 cities saw accelerating prices. The National, 10-City, and 20-City Composites all rose at a faster rate in February than they had in January.

"At a regional level, Phoenix retains the top spot for the ninth consecutive month, with a gain of 7.5 percent for February. Home prices in Seattle rose by 6.0 percent, with Tampa and Charlotte prices both gaining 5.2 percent. Prices were particularly strong in the West and Southeast, and comparatively weak in the Midwest and Northeast.

"Importantly, today's report covers real estate transactions closed during the month of February and shows no signs of any adverse effect from the governmental suppression of economic activity in response to the COVID-19 pandemic. As much of the U.S. economy was shuttered in March, next month's data may begin to reflect the impact of these policies on the housing market." All three indices are higher than the peaks they reached in the summer of 2006, prior to the housing crisis. The National Index is 15.5 percent above that peak, the 20-City has a 6.4 percent edge and the 10-City is 2.7 percent higher.