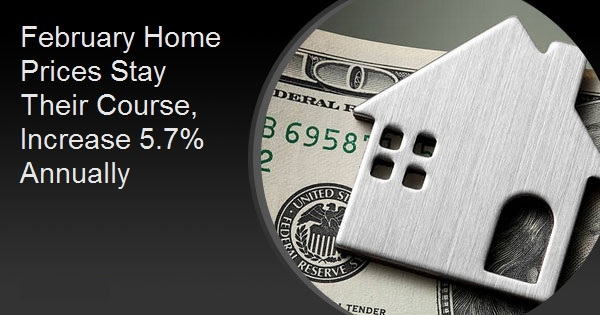 House price growth continued to accelerate through February on the Federal Housing Finance Agency's (FHFA's) Housing Price Index with the U.S. index posting a monthly gain of 0.7 percent in February. The January increase was originally reported as 0.3 percent, a sharp decline compared to the previous months, but that estimate has now been revised to 0.5 percent

The annual increase in February was 5.7 percent. The year-over-year appreciation in January was 5.3 percent. "U.S. house prices posted a strong increase in February," according to Dr. Lynn Fisher, Deputy Director of the Division of Research and Statistics at FHFA. "The growth in home prices coincides with other data showing robust housing market activity in early 2020 preceding the current crisis.  House prices had positive monthly gains in every census division.  Transactions still do not reflect much, if any, influence from the COVID-19 outbreak as of February."

FHFA's House Price Index is based on the sales prices of homes purchased with Fannie Mae or Freddie Mac financing. The index was benchmarked at 100 in January 1991. The current reading is 287.0.