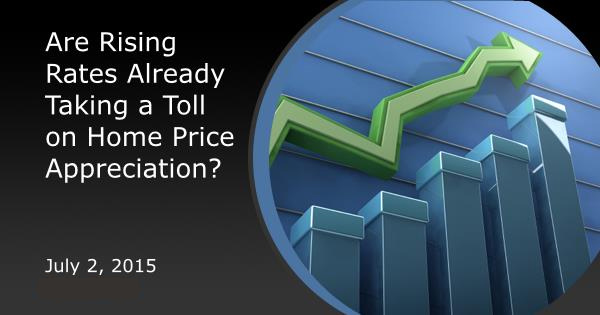 The most notable development late last week was a return to fresh 2015 highs for mortgage rates.   It wasn’t that there was any new, clearly-defined motivation for such a thing.  Rather, rates were already holding near their highest recent levels and economic events in Europe conspired to nudge global bond markets slightly higher in yield.

Greece continues to dominate headlines, and indeed Greece-related news was part of the nudge on Friday.  That said, keep last week’s thoughts in mind when thinking about air time versus market impact.  Greece continues to account for nothing more than a few brush strokes in a bigger picture.  Monday brought a good example of this as Greek yields (rates) skyrocketed over the weekend after bailout negotiations broke down.

The normal flow of events with respect to Greece’s impact on domestic interest rates is that “bad news for Greece” causes Greek rates to rise, and it motivates investors to seek safer havens for their bond market holdings.  US Treasuries are one of the few at the top of that “safe” list.  Increased demand lowers Treasury rates, which in turn help mortgage-backed-securities (MBS) improve as well.  The net effect was slightly lower mortgage rates on Monday.

We remained in good shape on Tuesday, but this was largely due to the quarter-end trading environment in bond markets.  Many investors have trades that they have to make by the end of any given day/week/month/quarter/year.  The longer the block of time that’s closing out, the greater the effects can be from this compulsory trading.  It’s usually beneficial for rates and this month-end was no exception.

Unfortunately, that made it easier for rates to bounce back (higher) on Wednesday.   Economic data at home and abroad joined in the effort to push rates back toward last week’s highs.  Thursday’s weaker Employment Situation (the “jobs report”) helped undo only some of Wednesday’s damage, leaving rates in very similar territory compared to last week.*

Housing data continued its recently strong showing this week, with 9yr highs in Pending Home Sales leading the charge.  The rest of the week's housing related data focused mostly on prices with both Case-Shiller and Black Knight noting ongoing improvements.  The caveat on the home price data is that gains have been decelerating since February.   In fact, Case-Shiller’s seasonally adjusted 20 city index missed rose only 0.3 percent versus forecasts of +0.8 percent and a previous reading of 1.0 percent.

It’s far too soon to say that whether or not price appreciation has turned a corner, but there are a few warning signs elsewhere in the data.  Specifically in the home price data, the most recent peak in February brought the year-over-year levels of appreciation very close to those seen before the housing crisis.  Additionally, and probably unsurprisingly, recent peaks have occurred right as rates have bottomed out (in early 2013 and early 2015).  The hypothesis logically presents itself: if rates continue higher, purchasing power in the housing market will continue to erode.

This is all the more relevant a concern considering the ramp up in first-time homebuyers noted in last  week’s data (or in this week’s decrease in investor/all-cash activity, depending on how you look at it).  Either way, we can safely assume that rising rates will bring at least SOME pressure on prices.  It’s too soon to say whether that’s enough to damage the ongoing trend of price improvement.  Certainly though, we’ll need the trend in wage growth to improve if we hope to weather any serious rise in rates, and Thursday’s employment data was not encouraging in that regard.

Markets are closed in observance of Independence Day tomorrow, though many banks and mortgage companies will remain open.  Lender rate sheets should mirror Thursday’s.

Next week is slow in terms of scheduled data, but Greece’s referendum over the weekend should offer some market volatility early.  Generally speaking, we still haven’t seen enough resilience against 2015’s push higher in rates to bet against it, though June’s case was slightly better than May’s.

* Freddie Mac’s weekly rate report, which is covered by all major media outlets as mortgage rate gospel, shows the highest rates of the year this week.  This is unfortunate, because the highest rates were absolutely seen last Friday.  Freddie’s survey doesn’t even cover Thursdays or Fridays, so if either day sees a big spike—as last Friday did—it’s not reflected in Freddie’s numbers.   Now this Thursday is a similar story where the jobs report has rates moving back down.  Bottom line, this week’s rates have definitely been lower on average—especially on Tuesday and Thursday.