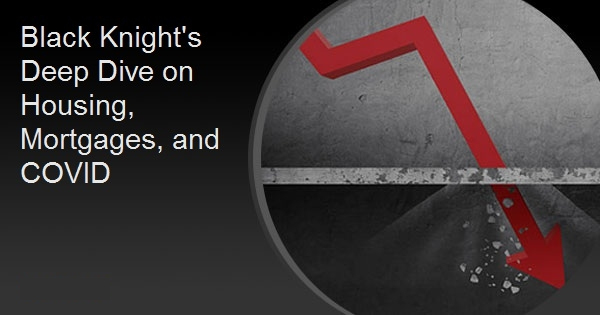 Black Knight has taken what will probably prove to be only their first in-depth analysis of the potential effects of the COVID-19 pandemic on the economy and specifically on the U.S. housing and mortgage markets. The paper looks at the current state of the market, key drivers of the pandemic on the housing and mortgage industries and models some possible outcomes. We are extremely pleased that they have used mortgage rate information from MortgageNewsDaily for some of their calculations. Because it is their business, Black Knight, also makes a lot of recommendations as to how technology can mitigate some of the most dramatic impacts.

The company notes that the situation at present is incredibly fluid and dynamic, "and underlying facts and assumptions in this report may need to be revisited as the true global, national and local impacts of the COVID-19 pandemic, and the nation's response, become more clear. There are, at present, far too many unknowns to have any true certainty regarding forecasted impacts."

The epidemic hit as the mortgage market was at a historically positive - even record-setting - level of performance, largely due to elevated credit requirements and strong underwriting after the 2008 recession. The U.S. national delinquency rate fell to its lowest point on record in January 2020 and the total number of loans 30 or more days past due or in active foreclosure were the fewest since March 2005. Other performance metrics - serious delinquencies, new defaults, foreclosure starts, and foreclosure sales all were at or near all-time loans in the first two months of this year.

Homeowners were holding record levels of equity. Median home prices were up 54 percent from their 2012 troughs while total mortgage debt on mortgaged residential properties was equivalent to 52 percent of the associated homes' values. This leaves a substantial buffer against the potential for falling home prices. Likewise, record levels of tappable equity, cash that can be borrowed without exceeding 80 percent loan-to-value (LTV), could be leveraged in part to offset temporary income losses as well as mitigating the incentive for the strategic defaults which exacerbated the delinquency problem during the last recession.

Low interest rates and high levels of equity spurred a refinance surge in late 2019 and early 2020. In Q4 2019 refi volume hit a 6.5 year high and cash-out refinancing was the highest in 10 years. Approximately 600,000 homeowners withdrew $41 billion in equity via refinancing - the largest such volume since mid-2009, but still less than 0.75 percent of total available equity in the quarter. Refinancing accounted for 57 percent of all lending in Q4 2019 and early estimates suggested a larger share in Q1 2020. Black Knight says it remains to be seen what impact COVID-19 will have on the closings of refinance transactions already in play. There were also more than 11 million potential refinance candidates as of March 26, with Freddie Mac's average 30-year rate at 3.5 percent.

And Then it Hit

By the third week in March, unemployment claims had begun to spike. California, the tristate New York metropolitan area and Illinois state governments had imposed  shelter-in-place orders on their populations and were soon emulated by other states. The majority of states are now in or about to enter some form of lockdown.

The risks of rising unemployment and/or that of a broader economic shutdown are substantial although estimates vary. On Friday, March 20, Goldman Sachs suggested a 10 percent pullback in gross domestic product (GDP) in April, along with increases in unemployment rates to as high as 9 percent in the second quarter. By March 31, that projection had been increased to 15 percent unemployment and a 34 percent reduction in GDP. Early on, U.S. Treasury Secretary Steven Mnuchin had publicly warned that - absent massive government intervention - the impact could be even more severe, with an unemployment rate as high as 20 percent. On Sunday, March 22, Federal Reserve Bank of St. Louis President James Bullard predicted U.S. unemployment may hit 30 percent in Q2 as a direct result of COVID-19-related shutdowns and as much as 50 percent drop in GDP. In the two weeks ended March 28 more than 10 million Americans filled for unemployment bringing the unemployment rate to 5.5 percent.

The potential impacts on the real estate and mortgage ecosystem are significant. Black Knight identifies six points in the real estate and mortgage process that will probably suffer from, not the virus itself, but from the efforts to contain the epidemic; real estate sales, mortgage applications, loan origination, loan servicing, default servicing and loss mitigation and the secondary market/government. Some of these process points are traditionally performed face-to-face and will be hampered by stay-at-home orders. Others will be hurt as the economy slows from layoffs and business closures.

A volatile mortgage market has translated to increased interest rate volatility. The spread between the 10-year treasury yields and the 30-year fixed interest mortgage rate jumped from its 6-month average of 1.9 percent to 3.0 percent or more by mid-March. These typically move in tandem but surges in refinancing have overwhelmed some originators and secondary market uncertainty along with secondary market uncertainty have resulted in 30-year rate increases and widening spreads. That said, with 10-year treasury yields hovering around 0.75 percent as of March 23, and the Federal Reserve's announcement that it will resume quantitative easing (QE) efforts to reduce friction in secondary markets, the potential for 30-year rate declines and additional surges in refinance applications and servicing portfolio attrition still persist.

These fluctuations in rates have shifted the affordability landscape almost daily. Using MortgageNewsDaily's published rates, Black Knight found the payment required to purchase the average price home fluctuated by more than $138/month (13 percent) over a two-week period. This obviously made it difficult for homeowners to nail down how much home they could afford and created challenges for those purchasing or refinancing to decide when to lock in their rate.

For example, a homeowner who qualified for a $1,075/month mortgage payment on March 5 would have qualified to purchase the average-priced U.S. home of $313,000 with 20 percent down. Less than two weeks later on March 19, MortgageNewsDaily said the rate had reached 4.15 percent. With that rate, the same homeowner would have only qualified for a $276,800 home purchase - more than a $36,000 reduction in buying power over a two-week span.

Rates have since lowered, Mortgage News Daily put the March 23 rate at 3.44 percent, but the situation remains incredibly volatile. Many potential homebuyers are likely left wondering what their true buying power is on a daily basis, and whether that will have changed by the time an offer is accepted and they're ready to lock in their rate. Black Knight says the Federal Reserve's new QE efforts "may calm the and restore some of the buying power lost in recent weeks, but with likely unemployment increases on the horizon homebuyer demand is certainly an area of focus for everyone in the real estate and mortgage communities."

Black Knight paper details current and future impacts of the epidemic on other segments of the housing market and presents some solutions that can help during the crisis and in returning more quickly to "normal." We will summarize those in future articles.