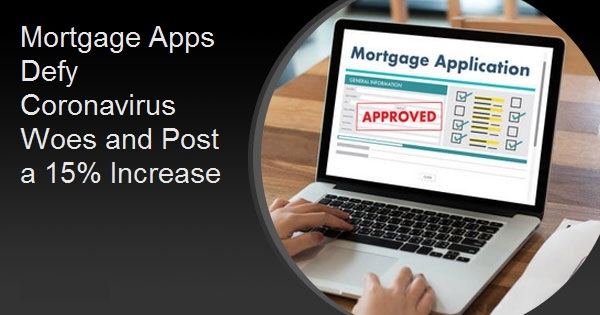 Well this was a surprise. In a week when unemployment claims soared to the highest level in probably ever and several large states went into a COVID-19 induced lockdown, the Mortgage Bankers Association (MBA) announced a significant increase in mortgage application volume. MBA's Market Composite Index, a measure of that volume, which had dropped like a rock (-29.4 percent) during the week ended March 20, bounced back by 15.3 percent on a seasonally adjusted basis and 15.0 percent unadjusted during the week ended March 27.

While application volume was up, purchase mortgage applications fell, down 11 percent from the previous week on an adjusted basis and 10 percent before adjustment. The unadjusted index was 24 percent below the same week in 2019. It was the largest drop in the Purchase Index in a non-holiday impacted week since at least 2013.

Refinancing fared far better. The Refinance Index increased 26 percent from the previous week and was 168 percent higher than the same week one year ago. The refinance share of mortgage activity increased to 75.9 percent of total applications from 69.3 percent the previous week.

"Mortgage rates and applications continue to experience significant volatility from the economic and financial market uncertainty caused by the coronavirus crisis. After two weeks of sizeable increases, mortgage rates dropped back to the lowest level in MBA's survey, which in turn led to a 25 percent jump in refinance applications," said Joel Kan, MBA's Associate Vice President of Economic and Industry Forecasting. "The bleaker economic outlook, along with the first wave of realized job losses reported in last week's unemployment claims numbers, likely caused potential homebuyers to pull back. Purchase applications were down over 10 percent, and after double-digit annual growth to start 2020, activity has fallen off last year's pace for two straight weeks."

Added Kan, "Buyer and seller traffic - and ultimately home purchases - will also likely be slowed this spring by the restrictions ordered in several states on in-person activities."

Looking at the impact at the state level, here are results showing the non-seasonally adjusted, week over week percent change in the number of purchase applications from Washington, California, and New York.

Rates declined, most falling by basis points in the double digits compared to the prior week. Effective rates were also lower. The average contract interest rate for 30-year fixed-rate mortgages (FRM)  with origination balances at or below the conforming limit of $510,400 decreased to 3.47 percent from 3.82 percent, with points decreasing to 0.33 from  0.35.

The average contract interest rate for jumbo 30-year  FRM, loans with balances higher than the conforming limit, was unchanged at 3.84 percent. Points decreased to 0.31 from 0.35.

The rate for 5/1 adjustable rate mortgages (ARMs) dipped 3.35 percent from 3.38 percent, with points decreasing to -0.03 from 0.26. The share of applications that were for ARMs dropped to 3.2 percent of total applications from 6.1 percent.

MBA's Weekly Mortgage Applications Survey been conducted since 1990 and covers over 75 percent of all U.S. retail residential applications. Respondents include mortgage bankers, commercial banks, and thrifts.  Base period and value for all indexes is March 16, 1990=100 and interest rate information is based on loans with an 80 percent loan-to-value ratio and points that include the origination fee.