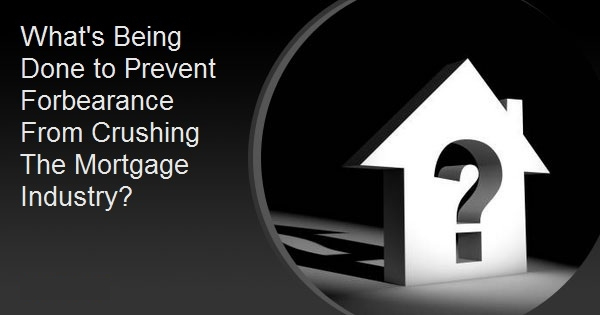 What's Being Done to Prevent Forbearance From Crushing The Mortgage Industry?

Among responses to the job losses and reduced income already emerging from the COVID-19 pandemic has been a moratorium on foreclosures and a requirement, coming from many quarters, that servicers offer mortgage borrowers an extended period of forbearance from their mortgage payments. This has raised an issue regarding the liquidity of those servicers.

Late last week Treasury Secretary Steven T. Mnuchin announced formation of a task force to focus on mortgage liquidity problems and has given them until March 30 to present their recommendation.

The Mortgage Bankers Association (MBA) outlined the servicers' potential forbearance problem in a March 20 letter to Mnuchin and Federal Reserve Chairman Jerome H. Powell. Under contracts with investors who purchase mortgage-backed securities (MBS), servicers are obligated to forward principal and interest payments on those securities to the investors even if borrowers fail to make their payments. Services are also obligated to pay property taxes and insurance premiums. The guarantors of those loans, FHA,  the VA, and the GSEs Fannie Mae and Freddie Mac, eventually repay the advances, but the delay can cause liquidity problems.

In its letter, MBA said that servicers maintain reserves to cover these advances and in normal and even stressed environments, such as a localized natural disaster, can withstand this liquidity pressure. "The forbearance levels being proposed in this instance, however, extends well beyond any levels of advances previously envisioned, and the capacity of the private sector alone to support." MBA estimates, for example, that if approximately one-quarter of borrowers avail themselves of forbearance for six months or longer, advancing demands on servicers could exceed $75 billion and could climb well above $100 billion.

Formation of Mnuchin's task force was announced during a telephone meeting of the Financial Stability Oversight Council, a panel of regulators formed after the 2008 financial crisis to spot emerging threats to the US economy. The Secretary will chair the panel which also includes the Federal Reserve and Securities and Exchange Commission. Federal Housing Finance Agency (FHFA) Director Mark Calabria was among those on last Thursday's call.

According to Erika Morphy, writing in GlobeSt.com, "While the Federal Reserve and Congress have taken steps to introduce massive amounts of liquidity into the financial system, there is no facility dedicated to aiding mortgage companies, or the commercial real estate industry. Earlier this week, commercial real estate trade associations urged regulators to expand the recently announced Term Asset-Backed Security Loan Facility to include agency and private-label CMBS." At present, however, the task force appears to be the sole move to help servicers.

FHFA is unlikely to provide assistance. Bloomberg says the agency has no plans to let Fannie and Freddie create funding mechanisms to aid mortgage servicers. FHFA spokesman Raphael Williams said in an emailed statement. "FHFA does not have plans to authorize a mortgage-servicer liquidity facility for either Enterprise as they both are undercapitalized." The agency said it will continue to emphasize that Fannie Mae and Freddie Mac must use their limited resources to support borrowers, renters, and investors.

According to Bloomberg, "Much of the financial industry has coalesced behind proposals that call for the US government to finance servicers expected payments to mortgage investors either through the Fed or Treasury Department."