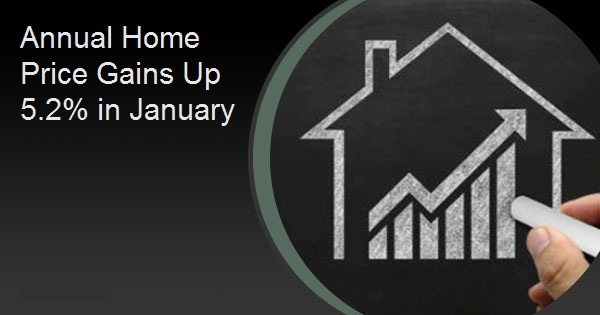 The pace of annual price increases ticked slightly higher in January according to Federal Housing Finance Agency (FHFA) House Price Index (HPI). The index, which had marked a 5.1 percent year-over-year gain, in December, rose by 5.2 percent in January.

The monthly increase was down significantly, however. While the original December increase of 0.6 percent was revised to 0.7 percent, the December to January appreciation was only 0.3 percent. Compared to December, prices declined in two of the nine census divisions. Prices ticked down 0.2 percent in the Mountain division and 0.1 percent in the West North Central. The highest increase, 0.7 percent, was in the South Atlantic followed by the Pacific division at 0.5 percent.

Price appreciation was positive on an annual basis in all regions, led by the South Atlantic at 6.4 percent. The Middle Atlantic division had the smallest gain at 4.1 percent.

"U.S. house prices continued to increase at a moderate pace in January," according to Dr. Lynn Fisher, Deputy Director of the Division of Research and Statistics at FHFA. "Transactions in January were unlikely to reflect much, if any, influence from the COVID-19 outbreak. House prices in the Pacific and South Atlantic regions grew somewhat faster over the year ending in January 2020 than observed the same time a year ago." FHFA reports prices based on purchase mortgages acquired by the GSEs Fannie Mae and Freddie Mac. The HPI was benchmarked to 100 in January 1991. The January 2020 reading was 284.4.