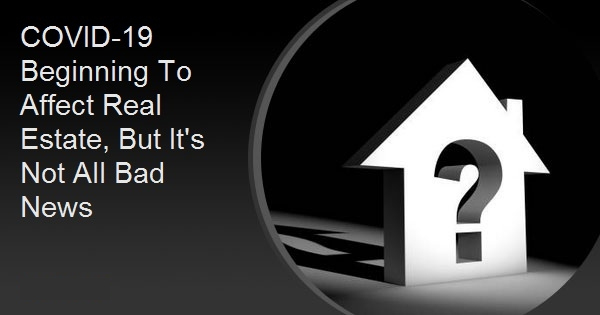 COVID-19 Beginning To Affect Real Estate, But It's Not All Bad News

Home sellers and potential buyers appear to be having a variety of reactions to the turmoil surrounding the COVID-19 virus with some even viewing it as an opportunity due to the lower interest rates. The National Association of Realtors® (NAR) conducted a flash survey on March 9 and 10 among its members to find how their customers were reacting.

Realtors reported that there has been only minimal change in seller interest in selling and about 10 percent reported that the problem has affected the number of homes on the market. Among agents operating in California, about 14 percent say they have noticed a decrease and about 15 percent said this in Washington. Those two states have, thus far, had the higher number of confirmed COVID-19 cases. However, in California 12 percent of members cited the number of sellers has increased because they can take advantage of lower interest rates upon moving. NAR found this to be true for 9 percent of sellers nationwide while 4 percent have decided to remove their home from market and refinance instead of selling.

About a quarter of sellers have changed the way they want potential buyers to view their homes because of the outbreak. The changes include suspending open houses, requiring visitors to wash their hands or use hand sanitizer, or asking buyers to remove shoes when entering and/or wear footies. The percentage of sellers adopting these kinds of changes jumps to 44 percent in Washington State and 34 percent in California. Potential buyers seem to be more reactive. Thirty-seven percent of respondents said the lower mortgage rates have excited home buyers much more than the stock market correction while 16 percent have noticed a decrease in buyer interest due to the epidemic. Almost 8 out of 10 (78%) said there has been no change in buyer interest due to the coronavirus.

Reports of decreasing interest were more numerous among Realtors working in California and Washington at 21 percent and 19 percent respectively.