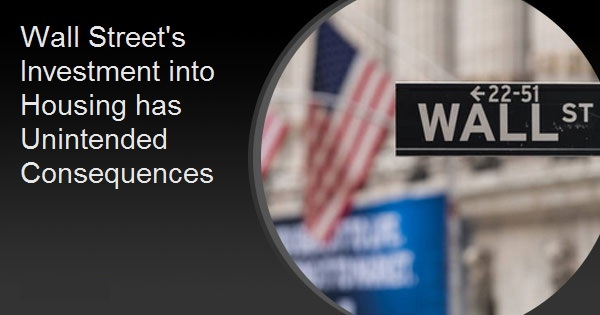 Unless you were involved in the housing industry or suffered the loss of your home, you probably didn't notice or have by now forgotten one of the most lasting effects of the Great Recession. As home prices plummeted and an estimated six million homes were lost to foreclosure or short sales, there was a massive influx of institutional investors into the rental market.

According to Ian Formigle Chief Investment Officer of CrowdStreet, almost 83  percent of single-family rental residences were owned by individual, so-called mom and pop, investors in 2001, By 2015 that had dropped to about 75 percent as Wall Street firms gobbled up, per Zillow, 5.4 million single family homes between 2006 and 2017. This, by the way, was approximately the same time when the national homeownership rate declined from 69 percent to around 63 percent.

At the time, these private investment groups and hedge funds were credited with putting a floor under plunging home prices. However, there were also fears that the difficulty of managing properties dispersed across a number of cities and hundreds of neighborhoods would cause them to cut and run once  the market stabilized and prices climbed. The sudden return of thousands of properties back to the market could knock the housing recovery back on its heels.

The latter did not happen and now there is a school of thought that the vast holdings of investors, who have been merging, consolidating, and growing larger, are exacerbating the already tight numbers of available homes for sale, especially starter homes,

There hasn't been much attention to the current effect of this institutional ownership, but this past weekend, the New York Times Magazine spotlighted how they funded their acquisitions, and how they are profiting, often through some questionable practices, and now with taxpayers assuming some of the risk.  While the article, "A $60 Billion Housing Grab by Wall Street" by Francesca Mari, focuses on the California market, the companies involved own homes in numerous metro areas. Some of the story she tells is anecdotal, built around the experience of one homeowner, Chad, who has been renting back his former home for nearly a decade. Mari does back up his story and we found other, less comprehensive, sources to validate her reporting. The NYT article is extremely long and even hitting the highlights requires our covering it in several parts.

There are about 25 to 30 big investors operating in the single-family rental market, the largest of which, Invitation Homes owned by the Blackstone Group, at its height controlled an estimated 80,000 units. In addition to California, various investors have a large presence in Phoenix, Atlanta, Las Vegas, Sacramento, Miami, Charlotte, Los Angeles, and Denver.

The Wall Street companies not only bought real estate, they also bought distressed mortgages in bulk. By 2016, 95 percent of the distressed mortgages on Fannie Mae and Freddie Mac's books had been auctioned off to Wall Street investors without any guarantee the new owners would provide recourse to workouts or modifications. This allowed private firms to acquire another 200,000 properties through their own foreclosures.

After a series of misfortunes abetted by more than a little poor financial judgment, Chad lost his suburban Los Angeles home in 2012. The house was purchased by a company called Strategic Acquisitions and a few months later they offered to sell it back to him for $100,000 more than they paid for it and substantially less than the total of his mortgages pre-foreclosure. He asked for time to put together a down payment but when, in the winter of 2013 he was ready to buy, Strategic was no longer interested in selling. Instead they rented it back to him under a two-page rental agreement with a two-page addendum.

They were atypical landlords. Rather than mailing his rent to a management office, it would be picked up at his home. Payments weren't always posted and when he withheld rent to force an accounting, they tried to evict him.

Mari says that over the next seven years Chad was cycled through a series of owners and management companies and his home is now owned by Blackstone's Invitation Homes. Offices moved, downsized, rents were hiked, and he was subjected to increasingly punitive fees. "Chad was required to submit his rent in different ways - online, certified mail, cashier's check, in person - with slightly different rules, by the 1st, by the 3rd. The leases grew in length from four pages to 18 to 43 as the companies doubled down on strictures and transferred more responsibilities - mold remediation, landscaping, carbon-monoxide detectors - onto the renter." Mari says that, while he didn't know it at the time, Chad's story was that of millions of renters "the beginning of a downward spiral into the financial industry's newest scheme to harvest money from housing."

Private equity firms have an imperative to make money and their methods of management were designed to facilitate that goal. Chad was soon paying more in rent than the $3,300 he had paid for his first and second mortgage combined. Strategic Acquisitions and its successors increased his rent from $3,500 to $3,800 in just a few years and in August 2017 it jumped 9.2 percent to $4,150. That didn't include fees. One owner required all tenants to use an online payment portal for which they charged a $121 "convenience fee." Chad was once assessed a landscaping charge even though no one was landscaping his property. He was able to get it removed, "But the fees, many of which were outlined in his lease, kept coming: lawyer fees, utilities conveyance fees, pipe-snaking fees." Once it appeared they were attempting to levy a fee on appliances which he had bought.

There were also late fees. One of the first times he was late, a notice of eviction was posted to his door. He paid the rent - and the $50 late fee. But three days later, there was another pay-or-quit notice - this time because he hadn't paid a $35 delivery fee for the late-fee notice. The second eviction notice, in turn, incurred a second $35 delivery fee. Over the years, he amassed a stack of late fees, more than 40 of them, some because he was struggling to keep up with the rent increases, some when he was trying to put pressure on his landlord to make repairs or take other actions.

Other tenants suffered abuses that went beyond the financial. We will detail some of Mari's findings about those in a subsequent summary.