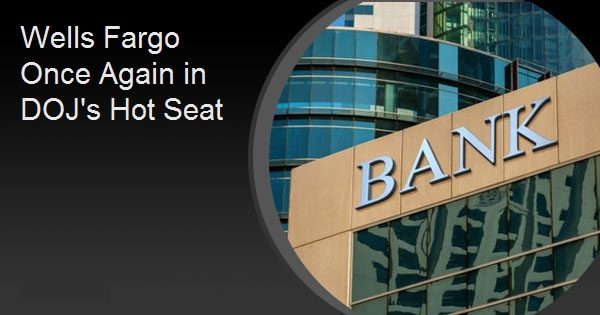 Following a full committee hearing on Tuesday morning that featured Charles W. Scharf, Chief Executive Officer (CEO) and President of Wells Fargo & Company, the House Financial Services Committee (FSC) has asked the Department of Justice to review earlier testimony of one of his predecessors.

In a letter to Attorney General William P. Barr, FSC Chair Maxine Waters (D-CA) said a year-long FSC staff investigation into Wells Fargo's compliance with five regulatory orders found that former Wells Fargo Chief Executive Officer Tim Sloan gave inaccurate and misleading testimony during a Committee hearing on March 12, 2019.
The letter continued, "Because this matter involves a potential violation of a federal criminal statute, I am requesting that the DOJ review Mr. Sloan's testimony along with the evidence presented in the enclosed copy of my staff's report and take such action as the DOJ deems appropriate."

The report, released last week, found the bank has:

In a memorandum released prior to the Tuesday hearing, Waters pointed out that Scharf will be the third Wells Fargo CEO to testify before this Committee in less than 3 and half years. "I will note  that each time a Wells Fargo CEO has testified before this Committee that he has resigned soon thereafter," she said. "Mr. Scharf, you have taken on a massive challenge. While I wish you luck, it is clear to this Committee that the bank you inherited is essentially a lawless organization that has caused widespread harm to millions of consumers throughout the nation."

The report also found that the Office of the Comptroller of the Currency is aware of dozens of cases at Wells Fargo where the number of consumers or customer accounts requiring remediation for a consumer abuse exceeds 50,000 or the amount of harm exceeds $10 million. Waters said she is very concerned that the bank's pattern of harming its consumers appears to persist.

The hearing is the first of several the FSC plans to hold on Wells Fargo. Waters said as part of the Committee's oversight it will be looking at legislation to hold Wells Fargo accountable. "While the Federal Reserve's asset cap was a good start, it didn't seem to change the bank's behavior."