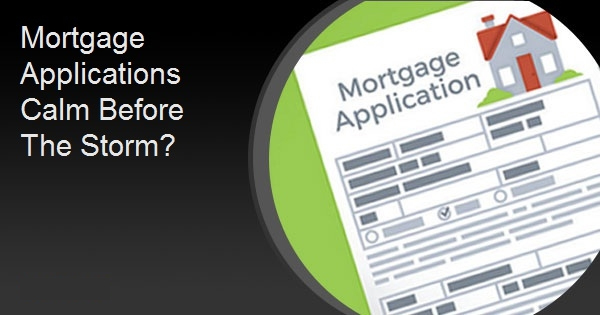 Mortgage Applications Calm Before The Storm?

There was a new round of interest rate cuts during the week ended February 21, but consumers largely ignored the additional potential for refinancing. The Mortgage Bankers Association (MBA) said its Market Composite Index, a measure of mortgage volume, increased by 1.5 percent from the previous week on an unadjusted basis, but was down 7 percent on an unadjusted basis. The increase in the adjusted index may have, in part, been because of an adjustment to account for the Presidents' Day Holiday which shortened the week.

The refinance share of mortgage activity fell to 60.8 percent of all applications from 63.2 percent the previous week. The Refinance Index dropped 7 percent although it remained 156 percent higher than during the same week in 2019.

"Last week appears to have been the calm before the storm. Weaker readings on economic growth caused a slight drop in mortgage rates, bringing them back to their level two weeks ago, but applications overall moved 1.5 percent higher," said Mike Fratantoni, MBA's Senior Vice President and Chief Economist. "Refinance applications for conventional loans dropped a bit, but FHA refinances increased more than 22 percent. Purchase volume remained strong, supported both by low rates and the increased pace of construction over the past few months. With housing supply at low levels, new inventory is a positive development for prospective homebuyers."

Added Fratantoni, "As fears regarding the coronavirus have increased, Treasury yields have dropped to record lows this week amid the ensuing financial market volatility. Next week's results will show the impact this drop in Treasuries had on mortgage activity."

The average contract interest rate for 30-year FRM backed by the FHA averaged 3.84 percent with .26 point. The prior week the rate was 3.86 percent with 0.24 point.

The average contract interest rate for 5/1 adjustable rate mortgages (ARMs) dipped to 3.21 percent from 3.23 percent, with points increasing to 0.28 from 0.21. ARMs had a 5.3 percent share of the weeks activity compared to 5.4 percent during the week ended February 14.