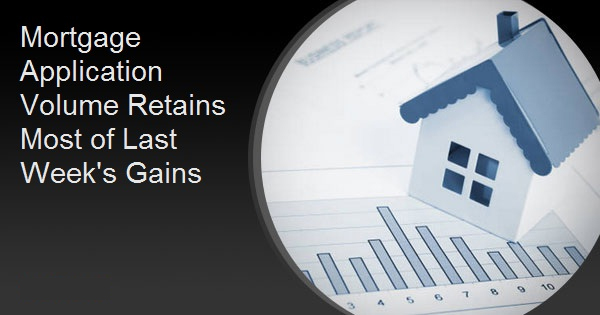 The volume of mortgage applications submitted during the week ended January 17 slowed after a strong performance - a 30.2 percent increase - the prior week, but it was only a small decline. The Mortgage Bankers Association (MBA) said its Market Composite Index, a measure of that volume, ticked down 1.2 percent on a seasonally adjusted basis while gaining 0.4 percent unadjusted.

Refinancing remained at a high level. The Refinancing Index, while down 2 percent on a week-over-week basis following a 43 percent surge during the week ended January 10, maintained a 116 percent edge over the same week in 2019. The percentage of all applications that were for refinancing dipped to 61.6 percent of total applications from 62.9 percent the previous week

"Mortgage applications dipped slightly last week after two weeks of healthy increases, but even with a slight decline, the total pace of applications remains at an elevated level. The purchase market has started 2020 on a strong note, running 8 percent higher than the same week a year ago," said Joel Kan, MBA's Associate Vice President of Economic and Industry Forecasting. "Refinance applications remained near the highest level since October 2019, as the 30-year fixed rate was unchanged at 3.87 percent, while the 15-year fixed rate decreased to its lowest level since November 2016. Even with more positive developments surrounding the U.S. and China trade negotiations and healthy retail sales data, investors seemed cautious and maintained their demand for safer U.S. Treasuries, which kept yields lower. Our expectation is that rates will stay along this same narrow range."

The average contract interest rate for 30-year fixed-rate mortgages (FRM) with loan balances at or below the conforming limit of $510,400 was unchanged at 3.87 percent. Points decreased to 0.27 from 0.32 and the effective rate moved lower.

The contract rate for jumbo 30-year FRM, loans with balances exceeding the conforming limit, moved higher by 4 basis points to 3.87 percent. Points dipped to 0.21 from 0.24 and the effective rate increased from the prior week.

Thirty-year FRM with FHA backing had a contract rate that averaged 3.78 percent, unchanged from the previous week. Points averaged 0.25 compared to 0.30 a week earlier and the effective rate declined.

The average contract interest rate for 15-year FRM decreased to the lowest level since November 2016, 3.25 percent, a 5-basis point decline. Points fell 0.22 from 0.27 and the effective rate was lower.

The average contract interest rate for 5/1 adjustable rate mortgages (ARMs) was 3.29 percent, down from 3.35 percent the previous week. Points grew to 0.25 from 0.11 and the effective rate was lower. ARMs accounted for a 4.6 percent share of all applications, up from 4.5 percent a week earlier.