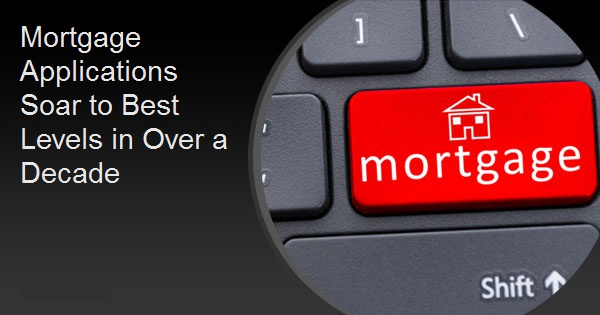 Mortgage Applications Soar to Best Levels in Over a Decade

Mortgage application activity exploded out of the starting gate during the first full week of 2020. The Mortgage Bankers Association's (MBA) said its Weekly Mortgage Applications Survey for the week ending January 10, 2020 showed increases in every category, dramatic ones in most, as rates set new recent lows. The Market Composite Index, a measure of mortgage loan application volume, increased 30.2 percent on a seasonally adjusted basis from the week ended January 3, a period that was still in holiday mode. The previous week's results included an adjustment for the New Year's Day holiday. On an unadjusted basis, the Index was up by 67 percent compared with the previous week.

There was a 16 percent increase in the seasonally adjusted Purchase Index which was also 51 percent higher on an unadjusted basis. The latter index rose 8 percent from its level during the same week in 2019.

"The mortgage market saw a strong start to 2020. Applications increased across the board, and the 30-year fixed-mortgage rate hit its lowest level since September 2019," said Joel Kan, Associate Vice President of Economic and Industry Forecasting. "Refinances increased for both conventional and government loans, as lower rates provided a larger incentive for borrowers to act. It remains to be seen if this strong refinancing pace is sustainable, but even with the robust activity the last two weeks, the level is still below what occurred last fall."

Added Kan, "Homebuyers were active the first week of the year. Purchase activity was 8 percent higher than a year ago, and the purchase index increased to its highest level since October 2009. Low rates and the solid job market continue to encourage prospective buyers to enter the market."

Mortgage rates, both contract and effective, moved lower for all fixed-rate loan products. The average contract interest rate for 30-year fixed-rate mortgages (FRM) with conforming loan balances at or below the new 2020 conforming limit of $510,400 decreased to the lowest level since September 2019, 3.87 percent, from 3.91 percent. Points dipped to 0.32 from 0.34.

The average contract rate for jumbo 30-year FRM, loans with balances exceeding the conforming limit, was at its lowest level since November 2016, 3.83 percent, from 3.88 percent. Points grew to 0.24 from 0.17.

The average contract interest rate for 30-year fixed-rate mortgages backed by the FHA decreased to 3.78 percent, from 3.85 percent, the lowest level since October 2019. Points moved to 0.30 from 0.23.

Fifteen-year fixed-rate mortgages reached their lowest level since last September, 3.30 percent, down from 3.35 percent. Points declined to 0.27 from 0.29.

Rates, both contract and effective, of adjustable rate mortgages (ARMs) did move higher. The average contract interest rate for the 5/1 product increased to 3.35 percent from 3.19 percent, with points decreasing to 0.11 from 0.18. The share of applications that were for ARMs rose to 4.5 percent from 3.8 percent the prior week.