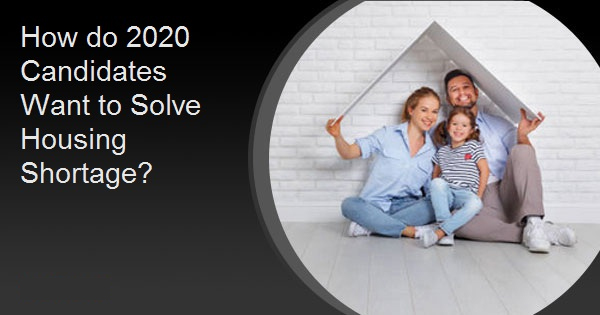 How do 2020 Candidates Want to Solve Housing Shortage?

The Urban Institute's Karan Kaul and John Walsh have provided a quick overview of the proposals put out by several Democratic presidential candidates to address the housing supply shortage. The writers say that the fact this issue is drawing the attention of candidates "promising" and the proposed solutions "a major step in the right direction."

As background, construction of new residential units is not keeping up with demand, especially given the 80 million Millennials who are in or entering prime household formation and homebuying years. The lack of supply in the face of demand almost always causes higher prices for consumers. UI notes that it was the big cities most affected by the supply/demand imbalance at first, but the lack of a nationwide response has caused the lack of affordability to begin filtering into smaller markets of late.

Candidates proposals are largely multipronged and include solutions that include direct federal investments to build homes and incentives for states and localities to ease up on land-use and zoning regulations that discourage construction. The most ambitious proposals call for investing hundreds of billions into producing more supply, which UI calls the most needed solution. Various ideas call for increased production, preservation, and rehabilitation of housing units.

Though the proposed dollars vary, the solutions advanced have key similarities. Several call for using existing vehicles such as block grants, tax credits, the Housing Trust and Capital Magnet Funds, and specific programs for rural, Native American, and Public Housing.

While the dollars proposed are smaller than the billions, even trillions suggested for construction and rehabilitation, there are also proposals for incentives for states to ease land-use and zoning restrictions. Both Senators Elizabeth Warren and Michael Bennet have proposed committing $10 billion to such incentives and Cory Booker's plan would cost $16 billion. (In addition to those candidates mentioned in the UI article, we found that Senator Amy Klobuchar, Mayor Pete Buttigieg, and businessman Tom Steyer have specific housing policies outlined on their websites. Another candidate, who had proposed a $16 billion incentive fund, former Housing and Urban Development (HUD) Secretary Julian Castro, dropped out of the primary race on Thursday morning.

Such easing of local restrictions could help solve a major problem for builders. Walsh and Kaul point out there are many communities where builders cannot build even mid-tier priced homes because of the costs related to zoning, codes, and land-use restrictions. This leads to larger, more expensive construction and results in a serious mismatch between the type of construction local policies are encouraging and what families in those communities can afford.

The affordability problems caused by the high cost of new construction are exacerbated by the rate at which the least expensive homes have appreciated over the last five years when compared to the most expensive ones. The authors contend that federal funding that rewards states for reducing or eliminating restrictive zoning could lead to more construction of smaller, less expensive units while reducing land-use restrictions and building codes could lower construction costs and increase affordability.

Savings from reduced building costs would then enable subsidy dollars to go further. As an illustration, UI found a 1 percent cost reduction in Bernie Sanders's $2.5 trillion "Housing for All" plan would save $25 billion, enough to build more than 80,000 additional $300,000 homes. In each of the candidate proposals, reduced regulations would have such a multiplier effect; each dollar of incentive payment would help cut costs and support more construction at a lower price point.

The UI analysts found two ideas in candidate plans which they view as having potential negative side effects, especially in any market downturn; both were contained in Sander's extensive housing policy proposals.

One is a proposed 2 percent tax on empty homes. The intention is to increase supply by encouraging the quick sale or renting of empty homes, but Walsh and Kaul say that, in a weak market, a tax on empty houses could result in faster sales at lower prices, thus exacerbating any housing price declines.

Sanders also proposes a 25 percent tax on speculators who sell a non-owner-occupied home for profit within five years of purchase. This idea seems attractive in the context of investor flips with little property improvements but at large profits, but it could have unintended consequences. First, it might discourage any moves by investors to reduce the current large inventory of homes to owner occupants at prices that reflect the value of improvements and a reasonable profit. It might also reduce the role of investors in stabilizing downward-spiraling house prices in any future housing crisis.

The authors conclude, "The solutions proposed by Democratic presidential candidates are an acknowledgement of the single largest problem our housing market faces today: lack of supply. Although mostly on point, the plans need some fine tuning and a reevaluation of strategies likely to be detrimental during economic downturns."