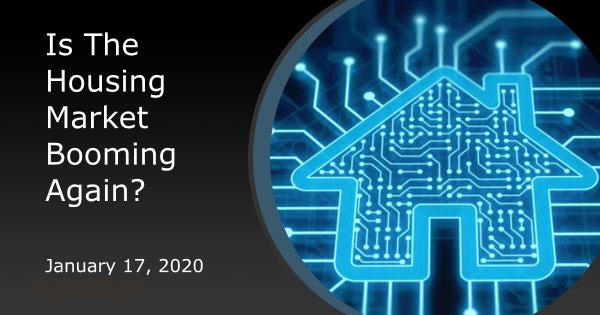 Is The Housing Market Booming Again?

The last housing boom didn't end so well for many Americans. That "B" word is being thrown around again at the start of 2020, but things are very different this time around.

Why are people saying housing is booming?

Due to a combination of rising rates and economic uncertainty, housing entered a bit of a lull in 2018 and didn't really begin to pull out of it until rates began to drop in 2019.  In the second half of the year, that recovery transitioned to something more aggressive and many housing metrics surpassed their previous highs for this cycle.

Now at the beginning of 2020, a few pieces of data have shot up at a surprisingly fast pace.  This week's examples include housing starts (a term that refers to the ground-breaking phase of new construction, after a builder has obtained permits) and mortgage applications.

The following chart shows housing starts and building permits.  Notice the surge in starts even as permits declined slightly. 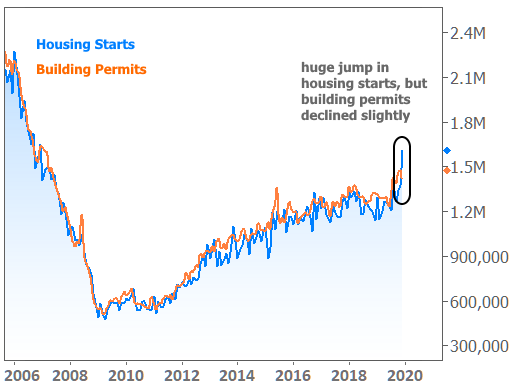 To be sure, this is a blowout result for housing starts, but the chart makes it look more dramatic than it is for a variety of reasons.  First off, the improvement over the previous month was totally in line with other super strong months over the past decade.  In fact, 5 months were clearly stronger and another 4 months were right in line. 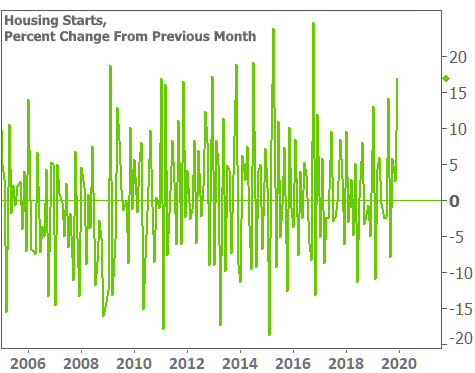 But even this is no reason to discount a move up to the best level in more than 13 years--not the best reason anyway.  The very best reason has to do with the composition of the report and seasonal adjustments.  Builders were able to get a lot more done this December compared to Decembers past.  Because December is typically one of the slowest construction months, the seasonal adjustment provides a major amplification of actual numbers.  If the actual numbers find a way to be much better or worse than normal, the large seasonal adjustment will only exaggerate the move.  And this December was much better than normal!

If housing starts were strong in December, isn't that still a good thing?  Indeed it is, but it's not the whole story.  Multifamily starts accounted for much of the improvement (also not a bad thing, but single-family construction is much more important).  Beyond that, we need to look at WHY December was so good.  In this case, it could be as simple as the weather being much more agreeable than normal in many parts of the country.

Why are you trying to rain on the housing market parade?

This is merely an attempt to put sensational headlines in context.  Housing is definitely doing great, but it's BEEN doing great (which is why I called attention to it back then)! The jump in building permits was clearly established by September, and they've remained elevated since then, waiting for housing starts to catch up.  Reports like Homebuilder Confidence (updated again this week) have done a better job of capturing the steady improvement throughout 2019 and into the new year. 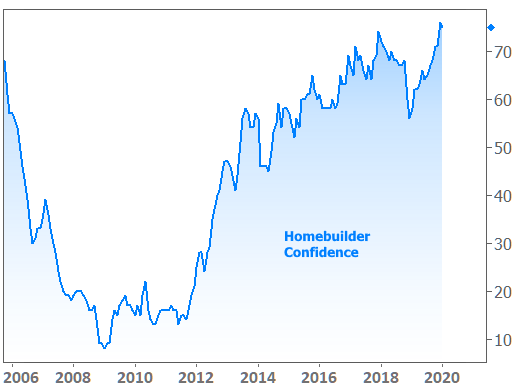 But what about mortgage applications?

Indeed, mortgage demand surged last week (in numbers reported this week), and in this case there are fewer caveats.  The chart really speaks for itself (and it's NOT seasonally adjusted). 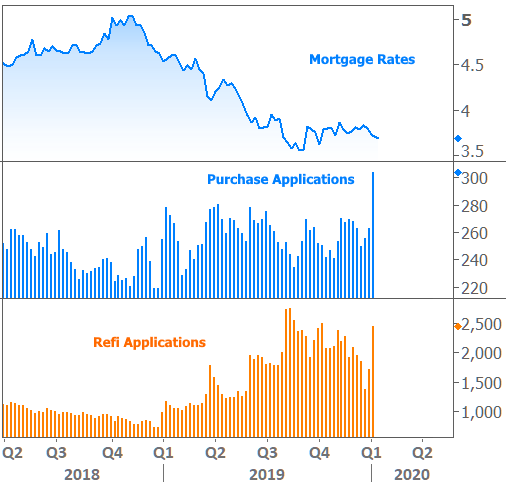 Part of the surge can be chalked up to the holiday calendar in late 2019. With Christmas and New Year's Day both falling on Wednesdays this year, last week was the first uninterrupted business week we've had since Dec 13-17.  Other factors include the stock market surging to new all-time highs heading into 2020 creating a "wealth effect" that can stimulate homebuying activity, and persistently low interest rates.

Mortgage rates, specifically, have been doing very well relative to the broader interest rate market.  The following chart shows the change in mortgage rates versus 10yr Treasury yields since July 2019.  At the time, Treasury rates dropped much quicker than mortgage rates, but as of this week, the gap has finally been closed. 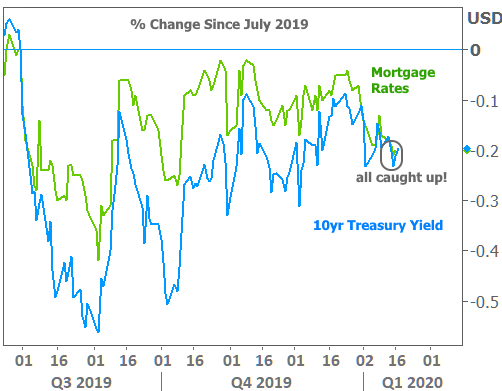