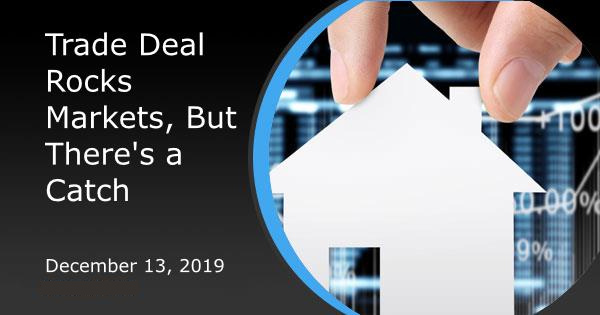 Last week, we talked about the many reasons that the importance of the US/China trade relationship could not be overstated. This week's market movement showed why.

With new tariffs set to take effect on Sunday, Dec 15th, we knew big news became more and more likely as the week progressed.  It arrived unequivocally on Thursday and remained front and center through Friday morning.

On average, traders expected some sort of cancellation or delay of the planned tariffs.  Under the best circumstances, such a cancellation would come courtesy of the signing of what has become known as "phase 1" of a multifaceted trade deal.  Phase 1 would provide a proof of concept to markets that the US and China could make progress on trade--thus making the broader deal more likely.

Thursday morning's first piece of evidence--a Trump tweet that said "Getting VERY close to a BIG DEAL with China"--wasn't destined to have a massive impact on markets.  It was too vague to send too many shockwaves, but it did get things moving in that direction. Markets were also willing to take that more seriously than some other tweets due to the timing (i.e. traders were on edge waiting for trade-related updates before the weekend).

Less than an hour later, there was an even more meaningful headline quoting a Wall Street Journal (WSJ) story.  The underlying article laid out specific changes in tariffs that had apparently been disclosed by sources from inside the administration.  The relative impact is clear.  The following chart shows the effect on rates/bonds (blue line) from each piece of news. 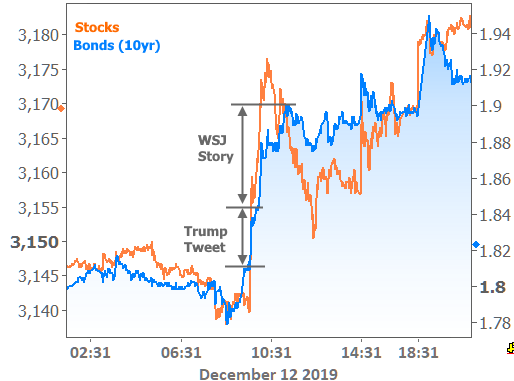 It's worth taking a moment to remind ourselves that news suggesting improvement in US/China trade relations is generally good for stocks and bad for rates/bonds.  The cause and effect exist on a spectrum where a grand, finalized, all-encompassing deal would put massive amounts of upward pressure on stocks and rates while minor updates simply account for smaller-scale volatility.

Thursday ended without any final confirmation that the phase 1 deal was in the books on an official level.  The White House acknowledged its agreement, but details were lacking--especially the detail about China's end of the agreement.  That began to change on Friday.

The first two updates on Friday were actually good for rates and bad for stocks as they pushed back on the notion of a finalized deal.  First up was a report that Chinese officials expressed concerns about US demands.  After that, a Trump Tweet called the WSJ article into question--or so it seemed.

Trump's tweet was actually in reference to a new article from Friday morning with the headline: "China Offers No Confirmation on U.S. Trade Deal" (the article was subsequently heavily edited and retitled to align with the reality we're about to discuss).

Between those two pieces of news, markets were quickly heading back in the other direction.  And while they would ultimately end up sticking with that decision, there was one more curveball that completely reversed the momentum.  Actually it was less of a curveball and more of a logical development in the negotiation process.  In short, Chinese officials held a news conference to confirm their agreement with the principles of the phase 1 deal.

Sounds simple, but it was a big, logical step in finalizing the phase 1 process. And remember that the more finalized the trade deal looks, the better it is for stocks and the worse it is for bonds.  Both sides of the market reacted accordingly as the news conference got underway.

So why did they ultimately end up moving LOWER?  It comes down to the fact that the deal, as it sits, is very light on details.  For instance, China hasn't yet put a number on agricultural purchases (a key consideration for the US).  They've merely pledged it would be part of the deal once signed. 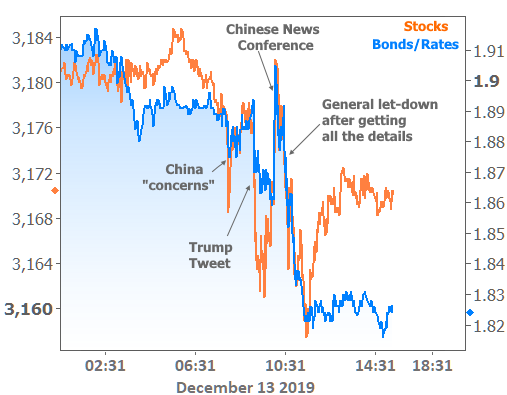 I say "once signed" because the deal isn't signed yet and isn't expected to be signed in 2019.  This is another reason for some push back in financial markets.  In a nutshell, traders quickly prepared for more sweeping accomplishments when the Chinese news conference began but soon pushed stock prices and interest rates back down as they learned how much work was left to be done AND that several important details had yet to be hammered out.  Here's how all of the above played out in the bigger picture: 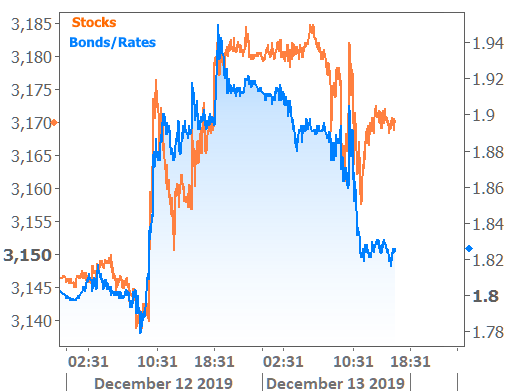 The more we zoom out and reset the scale of the chart, the more the story shifts from massive back-and-forth swings to something much less volatile.  True, volatility certainly exists over smaller time frames, but in the bigger picture, that volatility is playing out in a fairly narrow, sideways range for rates (blue lines in the following chart).  That feels like a victory given the stock market's ability to continue pushing into new all-time highs. 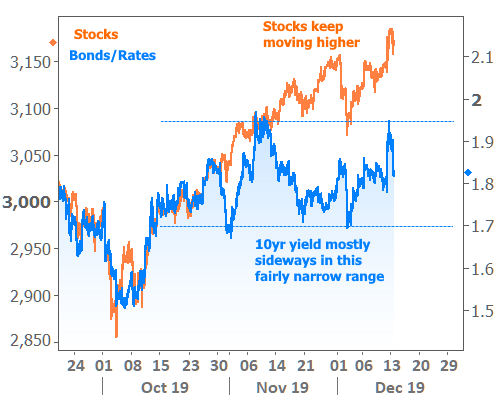 Making that victory slightly sweeter (or more bitter, depending on how you look at it) is the fact that the charts above rely on 10yr Treasury yields to convey general movement in the longer-term rate market.  Mortgage rates tend to move almost exactly the same way, but often with less volatility in the bigger picture.  For example, mortgages weren't able to follow Treasuries lower as quickly in August, but the trade off is that they've experienced less volatility since then. 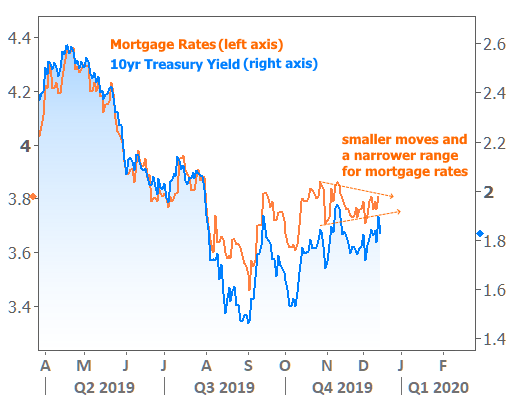