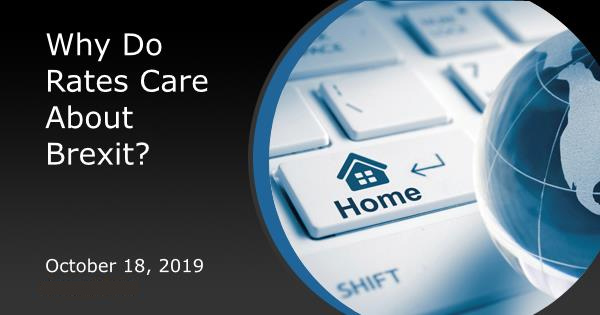 Why Do Rates Care About Brexit?

The UK's attempt to exit the EU (aka "Brexit") is back in the news.  UK voters decided to part ways with the EU in 2016, but it's taken this long to hammer out the details.  After an extension of the original deadline earlier this year, the new deadline of October 31, 2019 is approaching quickly.

That's a bit of a problem because, as was the case with the original deadline, the two sides are still not able to come up with a deal that will make it through British parliament for final approval.

Should we even care?

That depends. When the notion of Brexit first emerged, it was easy to dismiss as something that didn't concern people in the U.S.  Even now, it's not exactly the most riveting candidate for the evening news.  But for financial markets--especially for interest rates--it's a different story.

The EU is designed to facilitate the free flow of trade, people, money, and legislation in Europe.  The U.K. is a big part of Europe, with the 2nd largest GDP behind Germany.  If the U.K. leaves the EU, barriers are raised to the flow of trade, labor, and money.  Both economies will probably take a hit, and that's precisely why both parties have been trying to work out a deal as opposed to just going their separate ways.

It's hard to say exactly how big the impact would be, but investors logically assume a "no-deal Brexit" would do more economic damage than the alternative.  That damage would be coming at a time where the European economy is already on shaky ground, thus increasing the odds of contraction or even recession.  That's the fear, at least.

When investors have reasons to worry about recession risk, they tend to buy safe-haven assets like bonds.  When demand for bonds increases, rates fall (all other things being equal).  This is more than just an academic hunch. When the Brexit referendum surprised the market in June 2016, US Treasury yields (which play a key role in determining the direction of mortgage rate momentum) quickly fell to all-time lows. 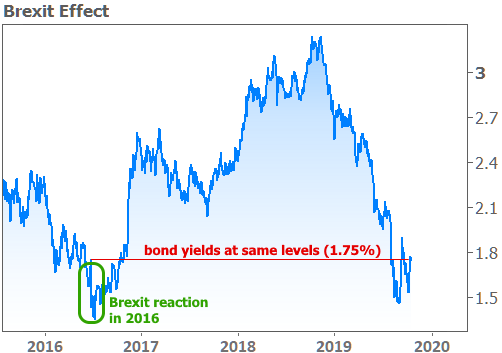 Even if a Brexit-related surprise isn't quite as likely to generate as big of a response this time around, it would still generate a response, and we could see that as early as Monday morning.

Why Monday morning if the deadline isn't until the end of the month?

Saturday, October 19th is the U.K.'s self-imposed deadline to vote on any Brexit deal.  Such a deal was ostensibly struck earlier this week, but reports quickly suggested there wouldn't be enough votes to approve it.  Nonetheless, parliament will convene for a special session on Saturday to debate the deal and hold an official vote.

There's some small chance that the deal miraculously passes.  That would likely be very bad for interest rates.  There's an equally small chance that Britain simply says "fine, we'll take the no-deal Brexit please."  The most likely scenario is a legislative stalemate followed by a request for another extension--likely 2 months this time.

At that point, it would fall to the EU to grant the extension or not.  Some EU lawmakers have suggested playing hardball and simply saying "no thanks... enjoy your no-deal Brexit," but odds favor another extension as a baseline outcome after all is said and done in the coming days.

So, if ANYTHING DIFFERENT happens, investors are ready to move accordingly.  For instance, a no-deal Brexit would likely pave the way for rates to move lower while an unexpected approval of the deal would almost certainly cause rates to spike.  The bottom line is that mortgage rates face a wider range of potential movement depending on the outcome of Saturday's vote.

And how can we be so sure the bond market will really care?

Let's put it this way: the fate of the EU economy will not be decided by Brexit alone.  There are also plenty of other concerns on our list of potential market movers.  But Brexit has a proven track record of causing volatility--even if that volatility is ultimately contained in a range.

We've already seen how the 2016 Brexit vote helped push rates to all-time lows, but the more recent evidence is just as compelling.  Spikes in British currency and EU bonds/rates set the tone for US rates throughout the week. 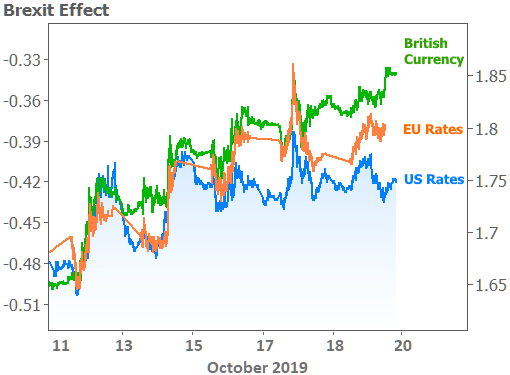 Zooming out a bit more, we can see that it was the meeting between the prime ministers of the UK and Northern Ireland earlier this month that sparked most of the recent upward pressure on rates. 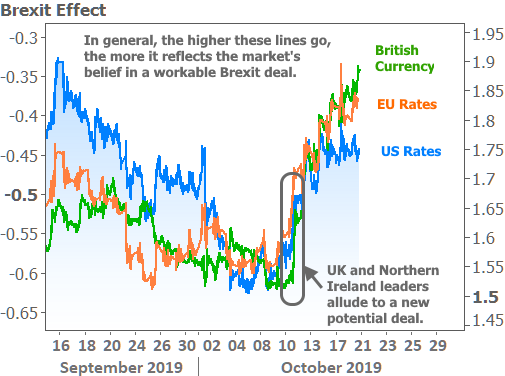 Brexit or no Brexit, the bond market is contemplating its next big shift.  Rates have been in a consolidation pattern for several months.  The series of lower highs and higher lows suggests indecision and/or anticipation.  Either way, we tend to see a more concerted effort to move in one direction or the other after bonds exit these sorts of patterns. 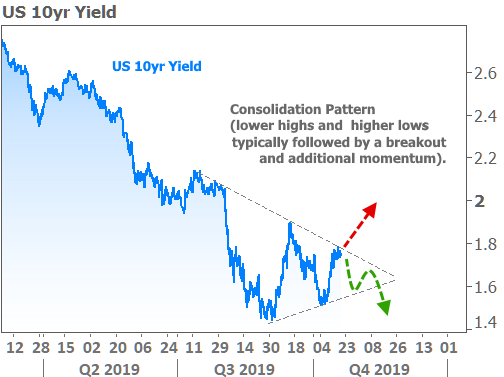 Given our proximity to all-time lows in the bigger picture and the fact that 2019's rate rally rivals some of the biggest past examples, it makes sense to be on the lookout for any additional upward pressure. 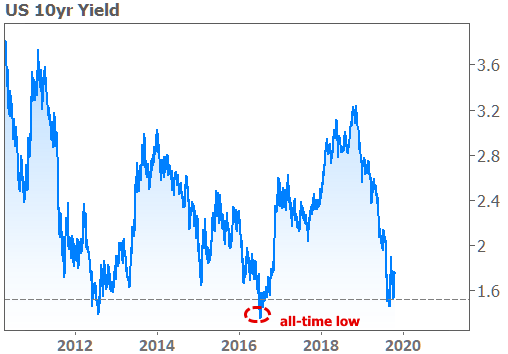