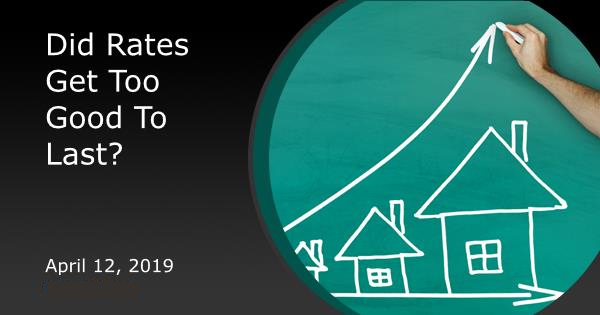 Did Rates Get Too Good To Last?

It's never fun when this weekly newsletter has back to back headlines concerning rates moving higher, but facts are facts. The average lender is back in line with the highest levels since March 20th. What went wrong and are there any silver linings?

At the simplest level, the past several months of interest rate movement can be summed up as a case of extremes.  At first, rates were "too bad" to move any higher (there were economic and market-related consequences).  Following a period of indecision, rates then moved into territory that was arguably "too good"--at least in hindsight. 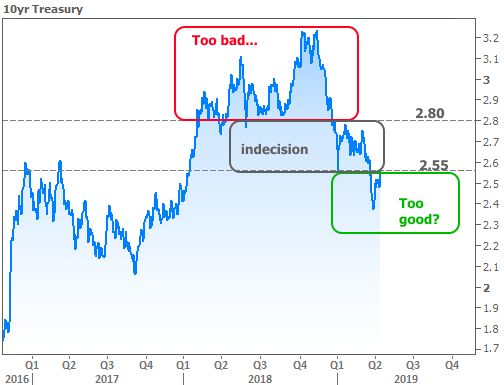 "Too good" would have been "just right" if several uncertainties had resolved themselves in an economically negative way (weak economy = lower rates, in general).  Chief among these uncertainties were the status of the Brexit delay, a lack of progress in China/US trade talks, and generally downbeat economic data in the EU and China.  All of the above enjoyed a bit of a perfect storm in late March when the Fed mentioned global growth concerns on March 20th only for economic data in Europe to validate that sentiment 2 days later (that's when the big spike into "too good" happened).

April has been a different story.  Headlines chipped away at US/China trade relations with one of the most important first steps finally agreed to this week (a framework for enforcement).  Britain secured a lengthy Brexit delay at an emergency EU summit (Brexit uncertainty had been helping rates).  And economic data at home and abroad was far from troubling (in some cases, it was surprisingly strong).  Long story short, the landscape no longer suggested the lowest rates in more than a year as being "just right." 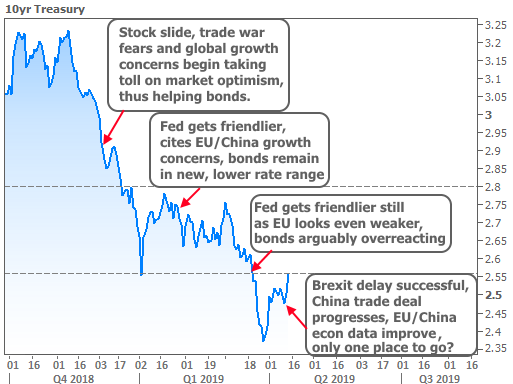 But here we are talking about mortgage rates while we look at charts with 10yr Treasury yields.  What's up with that?

This is a question best answered--at first anyway--with a chart. 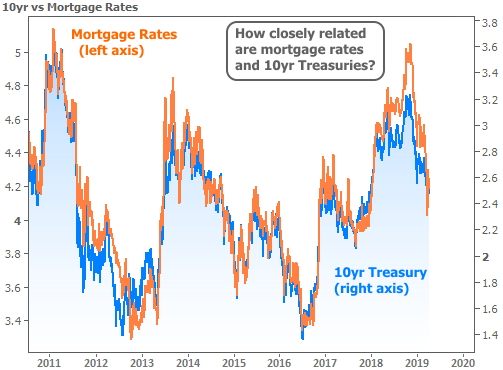 Clearly, 10yr Treasury yield movement is exceedingly relevant to mortgage rates.  Treasuries are much more liquid, much more actively traded, and do a much better job of capturing the market's every little hope and concern.  Simply put, they're what you want to follow if you want the maximum amount of information about longer-term rates.

But they also have differences, and those differences are important to the silver lining surrounding this week's spike in rates.  Whereas 10yr yields are back up and above their levels from the close of business on March 20th, Mortgage rates aren't quite there yet.  In fact, several lenders ended the week at the same levels seen on April 3rd.  Why the discrepancy?

Suffice it to say that we'd be here all weekend were we to discuss all the nuances, but we can cover the core building blocks of mortgage rates--the reasons they follow Treasuries so closely yet look like this when charted on the same axis: 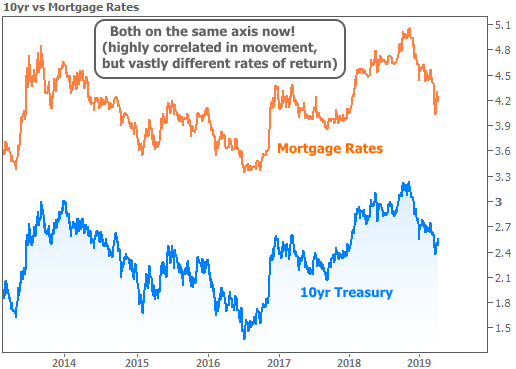 Mortgage rates are much higher than Treasuries primarily because investors expect to be compensated for taking additional risk.  Treasuries are as risk-free as you can get when it comes to the bond market.  Mortgage rates are just as safe in terms of reclaiming one's initial investment (because the government backs Fannie and Freddie as well as the FHA/USDA/VA--all the big players), but they're risky in the sense that they can vary greatly in terms of how long they last.

If an investor is going to take the risk that their principal investment is tied up at a super low rate (because borrowers don't want to refi or sell), they're missing out on the opportunity to invest that money at a higher rate of return.  They're compensated for this by demanding higher rates upfront.  It builds in a cushion against those risks and affords better returns if those risks don't materialize.

Beyond investors, there are lenders who have to be paid for the various costs they incur as a part of the origination and rate-lock process, servicers who get paid an ongoing rate of return for collecting payments, and of course the government (indirectly) who collects the biggest chunk of the white space in the chart above in order to guarantee that investors will get their principal back when loans default.  Don't worry about the government, by the way!  They're doing very well for themselves on that deal--so well that their fees account for roughly half a percentage point on every conventional loan.

Before you conclude that the government is stealing half a point of interest on every mortgage, just remember that investor demand wouldn't be as high without the government guarantee.  So although the government wouldn't be getting anything in an alternate scenario, rates would still be nearly as high, or higher (this is one reason that Fannie/Freddie reform hasn't been a quick or easy task, not to mention the fact that they're cash cows for the US Treasury).

Coming full circle now, because of all the complicated additional considerations related to mortgage rates, they often struggle to keep pace with Treasury yields when things get extra volatile.  That can be frustrating when rates are dropping quickly, but a blessing in disguise when they're bouncing back up, as they are at the end of the current week. That could change any time, so anyone with potential financing needs in the near term would be well-served to set up a game-plan with a loan originator who stays on top of all of the above.