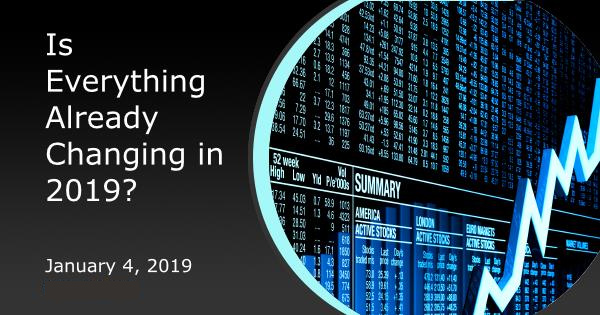 Is Everything Already Changing in 2019?

It was a long December for the stock market, which had its worst month since the financial crisis (in terms of % change). Meanwhile, interest rates had their best month since June 2016.

The size and direction of those moves caused speculation about a big reversal at the beginning of 2019.  In both cases, traders figured stocks and rates had moved so much lower so quickly that some sort of bounce was inevitable.

This line of thinking (i.e. that markets should bounce simply because they've moved "too far, too fast") speaks to an actual concept in market analysis.  In a word, the concept is "momentum," but it's often discussed in the binary form of "overbought" vs "oversold."

Simply put, the more any given financial market does one thing, the greater the risk becomes that it will do the opposite.  The big catch here is that there's no hard and fast rule about the timing or the size of the bounce.  In fact, sometimes the market even seems to punish a herd mentality that is hoping for such bounces for such simple reasons.

As it turned out, it was all of the above, at least for now.  Bond markets (aka "rates") spent the first 2 days of 2019 doing their own thing, moving lower at a much quicker pace than stocks.  Some of that movement was purely incidental, but a majority of the gains were driven by an exceptionally weak ISM Manufacturing report on Thursday morning. Then on Friday, an exceptionally strong jobs report coupled with a few choice remarks from Fed Chair Powell sent everything back in the other direction.

Stocks were less volatile by comparison.  They responded modestly to the weak manufacturing data before ultimately edging up past last week's highs after Friday's events.  In particular, they appreciated Powell's comment about the Fed being "sensitive to the message markets are sending."  That's his way of acknowledging that heavy stock losses could actually affect Fed policy. 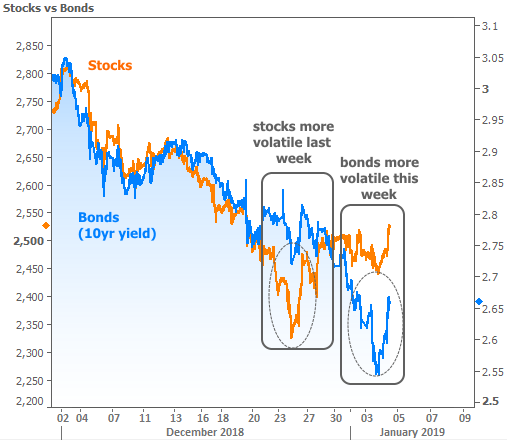 If we isolate stocks and bonds individually, we can better assess a potential momentum shift.  With respect to stocks, if this bounce continues, it will have had more to do with late December and less to do with Friday's seemingly all-important calendar events. 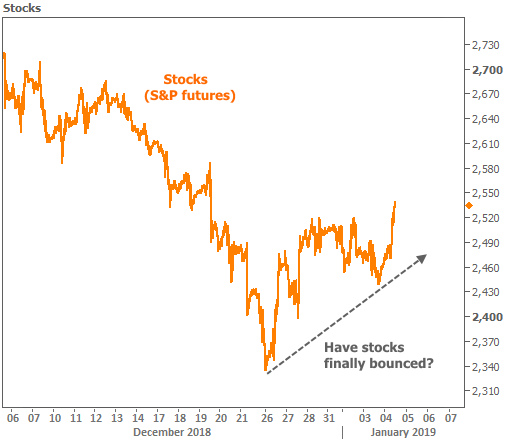 A somewhat similar case could be made for bonds, although we'll need to zoom in and see the overnight trading between Thursday and Friday. 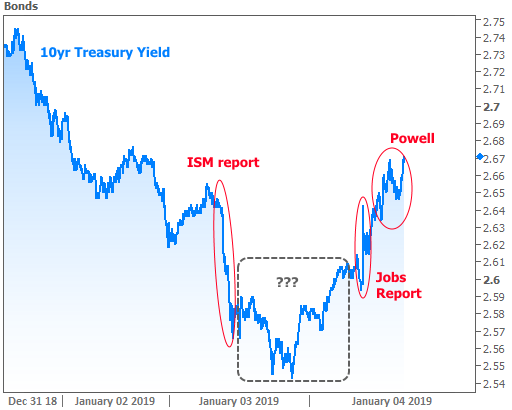 As the chart suggests, roughly half of this week's bounce in rates occurred during the "???" hours overnight, and weren't directly tied to any calendar events.  This is momentum at work!  It was finally the moment when traders agreed that rates had "fallen far enough" for now.  The jobs report and Powell's speech merely added some emphasis to the bounce.

So, does this mean everything is changing in 2019?

First off, an entire year is a long time to be guessing at ongoing themes.  Things could still change several times before 2019 is over.  Secondly, it's entirely too soon to answer that question.

All we know now is that stocks and bonds agree that the risk of an early 2019 bounce (higher rates, higher stocks) remains on the table.  Clearly, we've already seen some of it.  It makes sense to defend against the possibility of even higher rates next week, but keep in mind that both sides of the market have a long way to go before they're anywhere close to the recent high range. 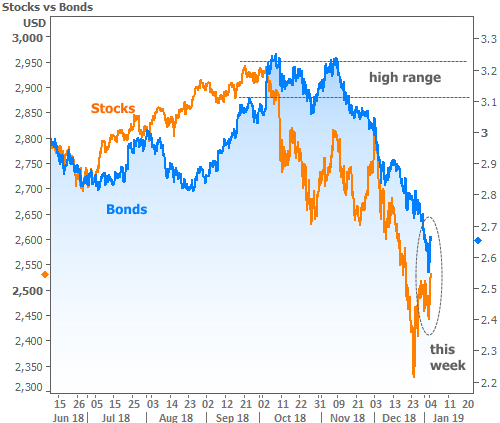