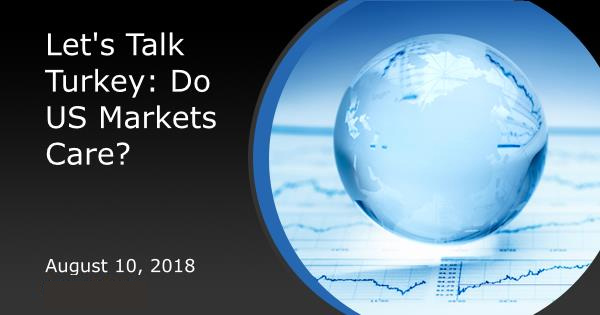 Turkey is the 17th biggest economy in the world in terms of GDP. That's neck and neck with the Netherlands, roughly 20% bigger than Saudi Arabia (the next closest country) and 4 times bigger than Greece.  So the fact that Turkey is in the throes of a debt crisis is making news.

But is Turkey moving domestic markets or are investors just gawking at the imploding Lira (Turkey's currency)?

I mention Greece because it was the last country outside the top 10 biggest economies to unexpectedly cause a stir in US markets.  Granted, that was truly a big deal because Greece is part of the Eurozone (for a time, there were concerns the entire EU could unravel).  But the Greek debt crisis reminds us not to be too cynical when it comes to the potential impact on US markets from drama that seems a world away.

Cynicism is fashionable (and usually a good policy when it comes to watching financial markets), but Turkey definitely had an impact this week.  We know this because we could see US Treasury yields (aka "rates") gearing up to respond to Friday's big inflation report (CPI, the consumer price index) before making an unexpected move that could only be explained by plummeting Turkish Lira.

A day earlier, Thursday's PPI (producer price index) ticked down just slightly.  PPI isn't as highly regarded as a market mover for rates.  Investors understand it has been trending higher after bouncing with oil prices, and should eventually level-off.  Still, PPI is now high enough to suggest some of those wholesale costs will have to be passed on to consumers.  As such, when PPI unexpectedly dropped--even if only by a modest amount--markets responded by getting in a slightly more optimistic position for Friday's CPI. 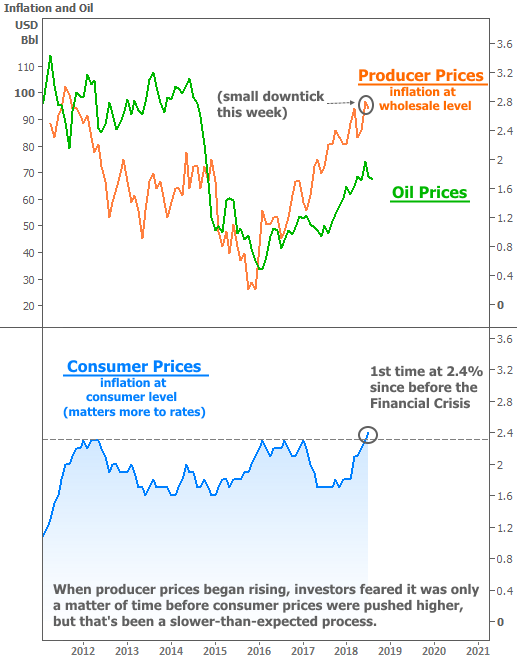 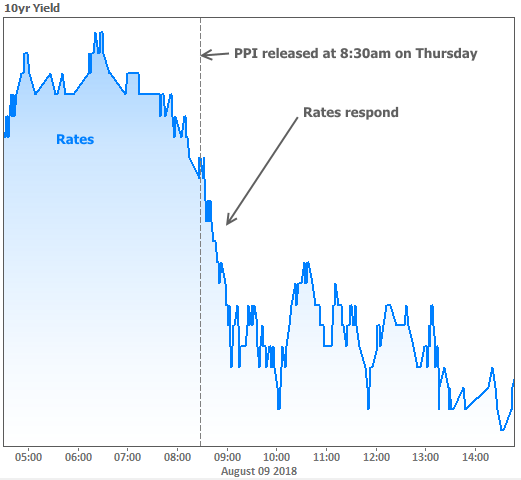 Rates did, indeed move higher in the first few minutes following Friday morning's consumer price  data, but then they turned around and went lower for the rest of the day.  The only compelling way to explain the move is by pointing to the Turkish crisis.  It was the first time this week that such an explanation really worked. 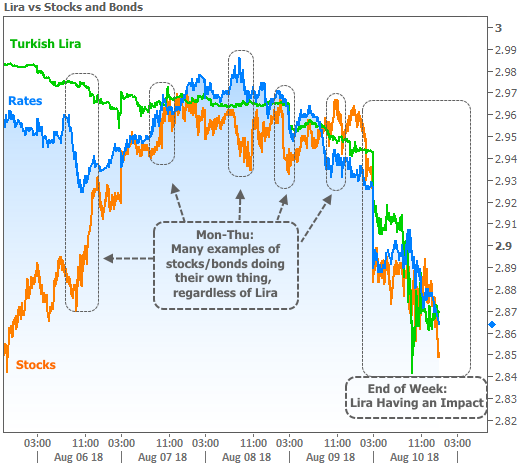 You may wonder why markets suddenly decided to care about Turkey when Mon-Thu saw so many examples to the contrary.  The reason is fairly logical.  Markets always have a list of concerns and potential motivations.  Some are clearly in the spotlight and others are lucky to be a sideshow.  But even the sideshow market-movers can crank the volume up enough to get the audience's attention.  In a nutshell, that's what happened with Turkey on Friday.  The following chart will help illustrate how loud the sideshow has gotten.  Then, the lower portion will remind us that it's still just a sideshow. 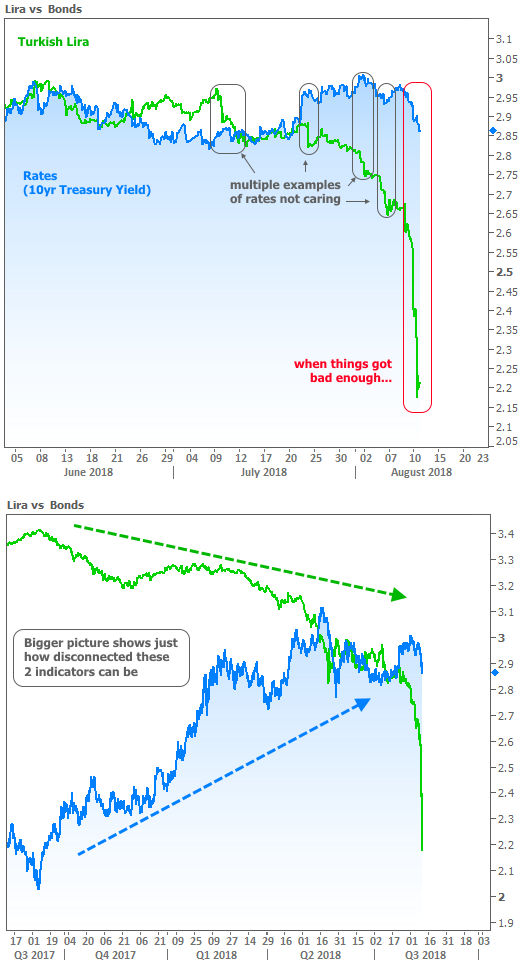 As is so often the case with these dire situations that are seemingly far removed from US markets, this isn't a black and white issue. You may come across some opinions in the coming days/weeks that credit Turkey for a majority of global market movement.  Others may take the opposite stance.  The truth is somewhere in between, and heavily dependent on how much worse the situation gets before it gets better.

While it's tremendously unlikely to be a game changer in the big picture, it's safe to label the Turkish debt crisis as "moderately helpful" for US interest rates this week.  Unfortunately, these sorts of "helpers" (the ones that come from crisis situations abroad), tend to help US Treasuries more than mortgage rates.  The following chart shows the relative recent movement. 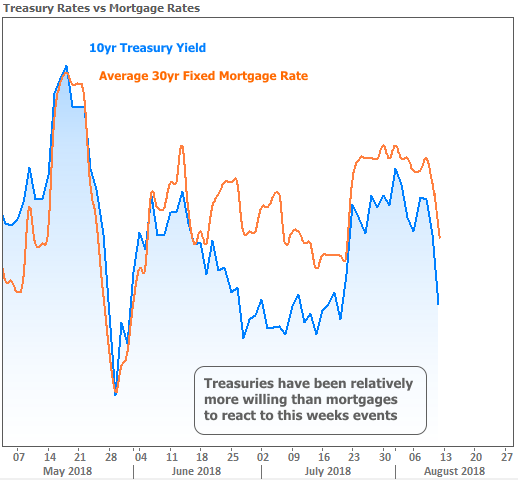 Next week is fairly calm in terms of scheduled data and events although we will get several housing-related reports on Wednesday and Thursday.  A smaller slate of potential market movers on the domestic front will leave the door open for Turkish headlines to cause volatility.  Just remember that volatility can be for better or worse when it comes to rates.  As soon as it looks like Turkey has turned a corner, rates run the risk of adjusting higher moderately, but quickly.