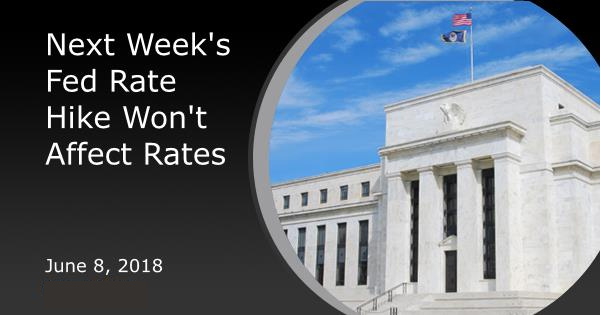 The Federal Reserve meets 8 times a year to set its policy rate: The Fed Funds Rate. At next week's meeting, a "rate hike" is a foregone conclusion. And that's precisely why it won't matter.

The financial market is the quintessential "discounting mechanism."  That means the price of any given asset will move based not only on what's happening today, but also on what's likely to happen in the future.  The more certain a future outcome, the more it will be priced in today.

The Fed Funds Rate is actually a great example because it leaves very little to chance in terms of timing and size.  Markets have a very good idea of when the next hike is coming and an even better idea of how big it will be.  Contrast that to the commodities market, where a trader might have to connect complex dots between weather patterns, production methods, and shifting consumer preferences in order to even begin thinking about the future price of soybeans.

The Fed, on the other hand, has all but promised that it will hike by precisely 0.25% next week, and traders have no reason to believe otherwise.  Does this mean mortgage rates are going up 0.25% next week too?

First of all, mortgage rates are not directly based on the Fed Funds Rate.  More importantly, as we just discussed, markets will adjust for whatever can be known about the future.  Interest rates are quite good at this!  Any impact on mortgage rates from next week's rate hike has already come and gone.

How can we be so sure?

First of all, I'm not saying that the Fed announcement won't have an impact on rates (more on that in a moment).  I'm saying the Fed RATE HIKE itself has already had the impact it's going to have.  There are other aspects of the Fed's announcement that can cause volatility for mortgage rates, but as for the hike itself, consider an interest rate market that is even more closely linked to the Fed than mortgage rates.

The following chart plots overnight indexed swaps or "OIS" against the actual Fed Funds Rate.  OIS can be thought of as a free market version of the Fed Funds Rate, but one that can move every day as opposed to 8 times a year.  Because of that nimbleness they provide clear confirmation for impending Fed hikes.  They are the escalator to the Fed's staircase. 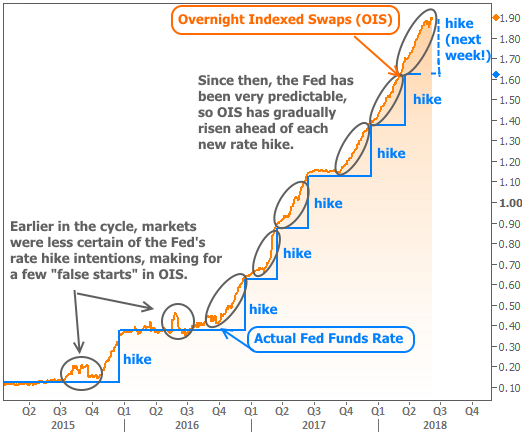 Long-term rates, like 10yr Treasuries or mortgages, are even more willing to adjust for future probabilities.  They've taken two big leaps higher during this Fed rate hike cycle WELL before each phase of the cycle was complete. In other words, if we just established that short term rates have already positioned for next week's hike, it's not even a consideration for longer-term rates. 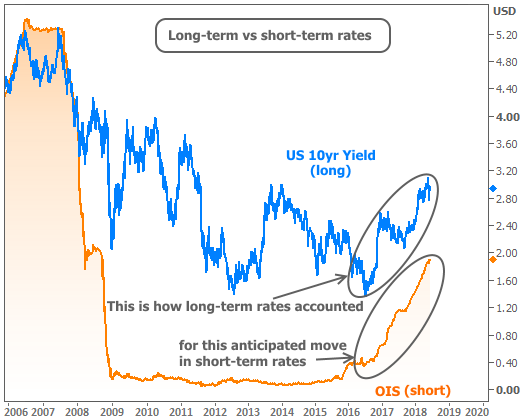 While the hike itself will not be news for rates, the announcement could still have an impact.  That's because the announcement is more than just a 'yay' or 'nay' on the next rate hike.  4 out of the year's 8 Fed announcements, in particular, are more meaningful because they bring an update to the Fed members' forecasts.  Next week's is one of those 4.

The forecasts are most closely-watched due to the component that tracks the Fed's rate hike outlook (sometimes referred to as "the dots" because it's presented on a dot plot).  After all, if we just established that today's rates are ready and willing to move based on whatever they can know about the future, how about an updated look at where the Fed sees rates in the future?!

Although the dots are far from a guarantee for future hikes, they are still the best tool at investors' disposal when it comes to getting a general sense of how quickly the Fed is willing to hike and to what ultimate levels.  With that in mind, any big change from the previous dot plot is always grounds for a big market reaction.  If rates move higher or lower in a big way at 2pm on Wednesday afternoon, this is likely the reason.

Beyond the Fed, there are other landmines on next week's calendar.  In terms of economic data, Tuesday's Consumer Price Index (inflation data) is a heavy hitter.  Thursday morning brings a policy announcement from the Fed's biggest counterpart, the European Central Bank (ECB).

Global financial markets are perhaps even more interested in hearing from the ECB because it will soon be forced to address the topic of ending its bond buying program--possibly as early as next week.  These bond buying programs ("QE" for the Fed and the "APP" for the ECB) are big business for interest rates.  The timing and details of the ECB's exit will almost certainly cause some volatility in rates, for better or worse.