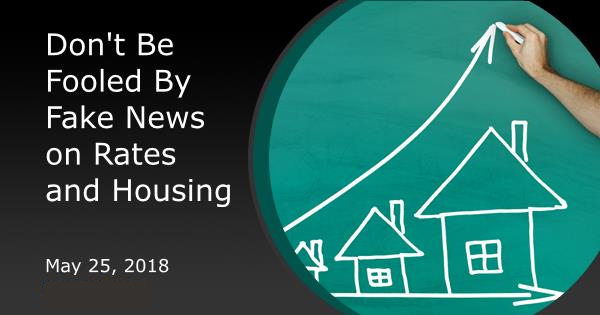 Don't Be Fooled By Fake News on Rates and Housing

It was a complex week in the world of mortgage rates and housing markets. Complexity often creates inconsistent news coverage. At best, most of the coverage fell short. At worst, some of it was downright wrong. Let's clear things up!

Last week's newsletter covered the surge to the highest interest rates in roughly 7 years.  To be sure, this rising rate environment deserves attention.  As seen in the following chart, it just surpassed the trough-to-peak move seen in 2012-2013.  But whereas many media outlets were putting out dire headlines about the 7-year highs THIS week, rates actually staged quite a healthy recovery. 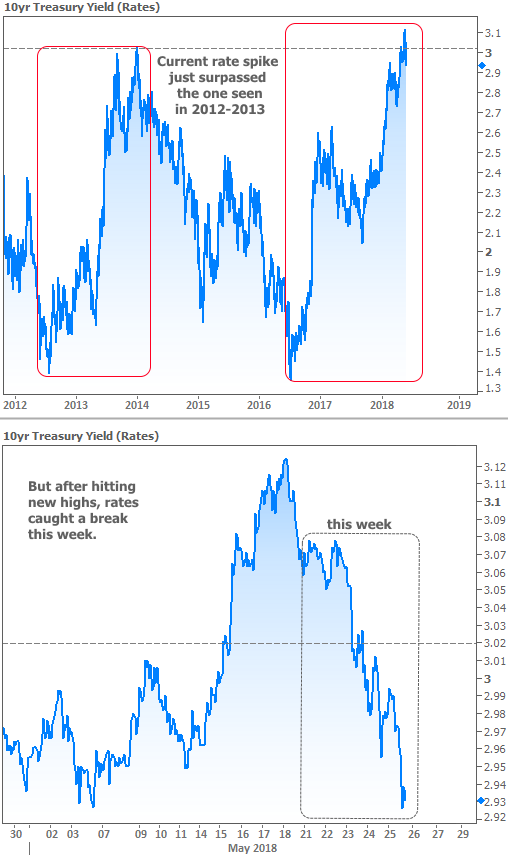 What gives?!  How could the chart above coexist with these headlines from the past 48 hours?

The answer is simple.  A vast majority of mortgage rate news is based on Freddie Mac's weekly survey.  Over time, Freddie's numbers do a fine job of tracking long-term rate trends, but they can completely miss the mark when it comes to short-term volatility.

The problem is that the weekly survey mostly captures Monday and Tuesday's rate quotes.  Last week, that meant Freddie was capturing the lowest rates.  This week, Monday and Tuesday saw the highest rates.  In other words, it was the worst possible timing for Freddie's survey.  Fortunately, we can easily examine day-to-day changes (green line below) to see reality. 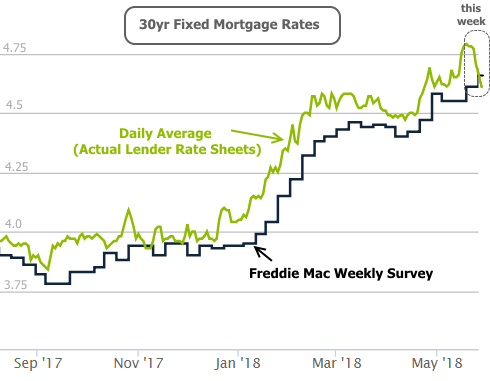 We can now agree mortgage rates and Treasury yields moved lower this week, no matter what the average news story says, but why?  Here too, things are bit more complex than normal.  Whereas rates often move in response to an important economic report or a policy update from the Federal Reserve, this week was really all about Italian politics.

You read that correctly!  As unrelated as it may seem, political risk in Italy directly translated to this week's rate rally.  If we explore some of the details, it actually makes a fair amount of sense.

Europe is among the world's top 3 economies.  Italy is the 3rd largest economy in the Euro area.  Drama in Italy reverberates throughout the European economy.  More importantly, if Italy were to exit the European Union (in similar fashion to Great Britain's "Brexit" in 2016), financial markets would have to account for a domino effect.

Why does this matter this week?  It's actually mattered for a few months, ever since Italy's anti-establishment 5-Star Party staged an election upset.  The EU wasn't immediately doomed, however, because 5-Star didn't win by enough to govern on its own.  It needed to form a coalition with one of Italy's other political parties, and that didn't happen until just last week.

Rather than team up with a party that would promote a more moderate view, 5-Star joined with the only other party that wants Italy to leave the EU.  Since then, financial markets have been panicking about an Italian version of Brexit.

While we don't know exactly what that might look like, investors can agree it increases both economic uncertainty and Italy's credit risk.  The obvious trade is to sell Italian bonds and buy safer haven assets (such as the bonds of big, stable economies like Germany and the U.S.).

Excess demand for bonds pushes rates lower.  As such, U.S. and German rates fell this week as Italy's rates skyrocketed.  The following chart shows the spread between Germany and Italy (which moves lower as Italy's rates rise).  Simply put, the lower the blue line, the more investors are worrying about Italy. 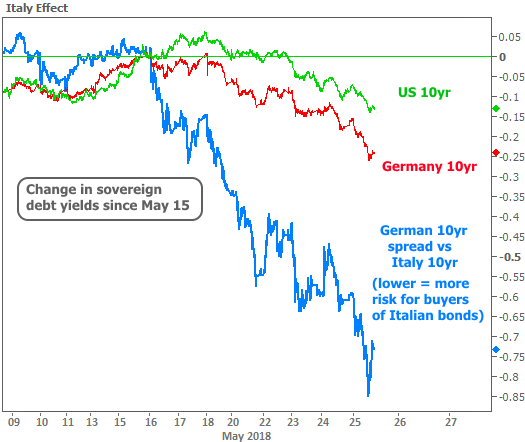 Though esoteric, these details are important in considering near-term risks for mortgage rates.  While we can't yet know if the new Italian government will actually push Italy out of the EU, we can at least observe that this week's rate recovery is predicated on a highly uncertain, highly volatile situation.

In other words, it's not as if we've seen a confirmed shift in economic data or Fed policy.  Rates could continue lower from here, but that would require a fairly constant supply of European drama, all other things being equal.  Moreover, the longer-term factors that have been pushing rates higher are still there (this stuff).  As such, it makes sense to work quickly to satisfy loan approval conditions so you can be ready to lock.

This week's home sales data was less than stellar.  News headlines were understandably gloomy, but they certainly don't capture the bigger picture, nor do they convey the subtleties that underlie the top-line sales figures.  For instance, it's true that New Home Sales fell 1.5%, but do you really care if they continue to operate in the linear trend seen in the following chart? 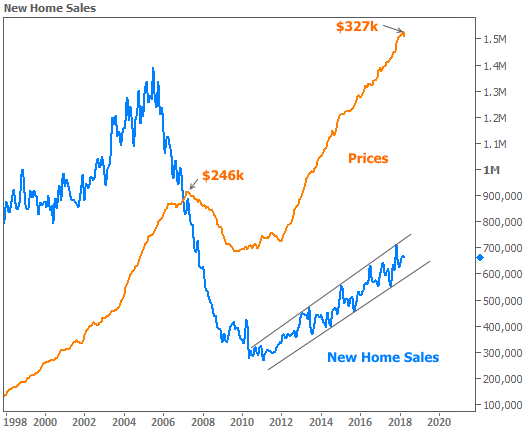 Existing Home Sales were more vulnerable to criticism, with a 2.5% decline in April and a 1.4% decline vs April 2017.  Whether or not that's a bad thing is open to debate.  History shows numerous examples of year-over-year declines.  That's only coincided with a major downturn in sales one time in more than 40 years. 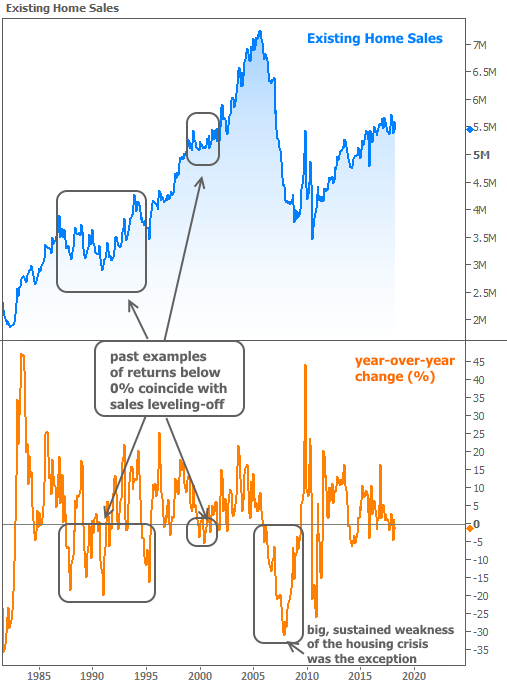