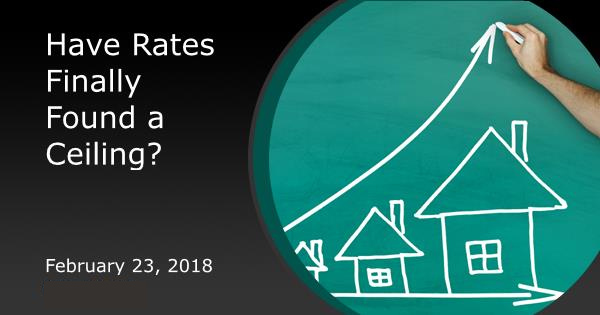 Have Rates Finally Found a Ceiling?

Mortgage rates have been moving higher at the fastest pace in more than a year. Just this week, they hit their highest levels in more than 4 years. But they also did something else they haven't done recently--something positive. Whether or not it's positive enough to suggest a broader shift remains to be seen.

The positive development occurred on the last day of the week.  Don't get your hopes up for some astounding revelation.  We're taking every small victory we can get at this point.  Ready?

The last day of the week was the first time in 2018 that rates (as measured by 10yr Treasury yields, the quintessential benchmark for longer-term rates in the US) ended the week LOWER than they ended the previous week.  That's it.

While it might not seem like much (and indeed, it may not amount to much), these sorts of developments can act as small clues about a shift in momentum.  The chart below will help visualize what's going on.  In the top portion, each candlestick represents a week of trading.  Solid candlesticks represent "winning" weeks where rates moved lower.

The histogram shows the week-over-week change in rates (and the very small break below the 'unchanged' line this week).

The lower pane of the chart delivers a more sobering reality, or perhaps a healthy dose of caution when it comes to the positive cues in the upper chart.  In the lower pane, each candlestick represents only one day.  It shows several examples of a back-to-back victories but a persistent unwillingness to break below the ascending trend-line. 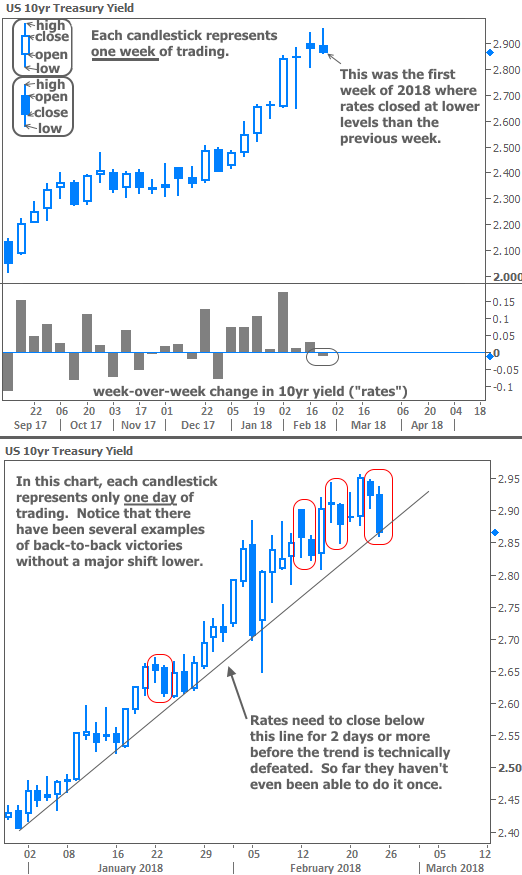 Although it's not very fun, it's nonetheless important to keep in mind the reasons that rates are moving higher:

1. A fundamental shift in the amount of debt issued by the government

US Treasuries are the foundation of interest rates in the US.  The more there are, the lower the price.  The lower the price, the higher the rate.  Tax reform and infrastructure spending mean the government must issue more Treasuries, but how much more depends on the extent to which economic growth helps increase revenue (more people making more money and paying taxes).  Needless to say, this is a very big unknown, but bond market participants have already done a lot to adjust for the potential outcomes.

2. Economic strength/optimism which, in turn, could push inflation higher

Inflation is a biggie.  In the next chart, you'll be able to see how inflation not only has a direct impact on rates from day-to-day, but also on the Fed's rate hike outlook.  The higher inflation goes, the worse it would be for rates.  Economists are divided on whether a significant rise in inflation is a threat.  Some are certain while others scoff at the notion.  Either way, traders are accounting for the risks by pushing rates higher. 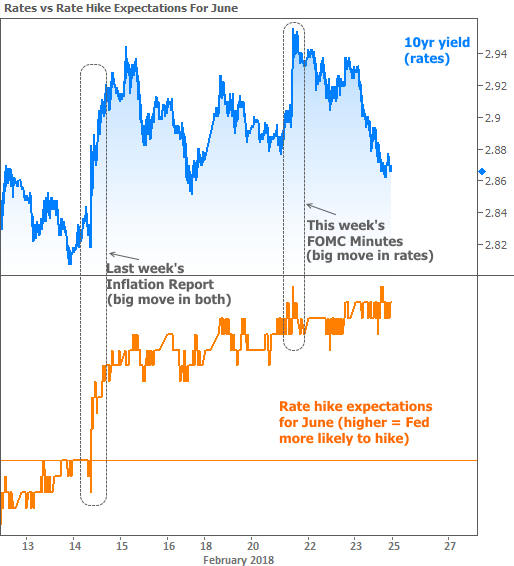 3. A Federal Reserve that was already in the process of trying to decrease its level of accommodation, but that now is all the more convinced

"Accommodation" = lower rates via the Fed Funds Rate and/or Fed bond buying.  The Fed responds to changes in inflation, employment, and financial stability by adjusting its level of accommodation.  They think things are going pretty darn well on all those fronts, so they've been raising their policy rate and decreasing the amount of bonds they buy each month (and yes, it's a double whammy for the Fed to be buying fewer bonds while the government is selling more).

The important thing to understand about these factors is just how glacial they are.  We're not dealing with a singular surprising headline.  We're not even dealing with a major development that happens to have an unknown long-term implication at the time (like the presidential election).  These factors are already happening or will continue happening.  They're unequivocally bad for rates.

In other words, it doesn't make sense to expect any sort of major correction in rates, barring a tremendously unexpected and severe geopolitical or economic development (World War 3, massive market crash, etc.).  In this environment, our most likely victories will be shorter-term and more measured.  So when we talk about "turning points" in rates, we're hoping for an improvement of an eighth of a percentage point--maybe a quarter--before the glacial uptrend resumes.

How long that trend will continue is anyone's guess.  One thing's for sure though.  The people that matter certainly don't expect it to continue forever.  Apart from higher rates acting as a natural brake on the economy (see the Home Sales Chart below), key investors and policymakers understand the next recession isn't a matter of "if," but "when."

Just this week, there was a strange juxtaposition of strong comments from the Fed (in Wednesday's release of the Minutes from the late January Fed meeting) and a discussion about the tools that would be employed in the next major downturn or economic crisis.  In that discussion, NY Fed President William Dudley reiterated his support of the Fed's bond buying plan in times of crisis.  More importantly, he said the Fed might not need to decrease its bond buying as much as he previously thought.  The less the Fed decreases its bond buying, the better it is for rates.

In housing-specific news, this week's Existing Home Sales data also made a comment on rates.  Refreshingly, sales figures themselves have been holding up fairly well in spite of rising rates.  It's inventory that continues to be the biggest issue. 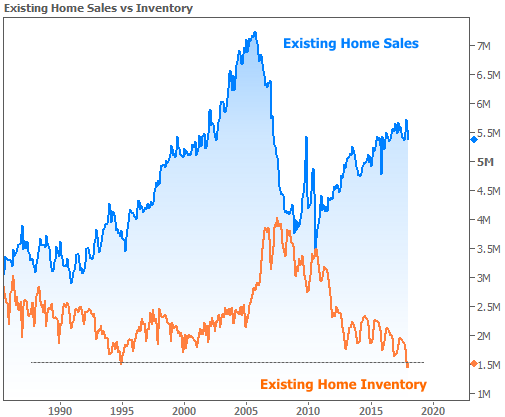 On that front, higher rates and expectations for a continued uptrend aren't exactly the right sort of enticement for listings and move-up buyers.  These headwinds can, of course, be overcome if those buyers are making more money and feeling more economically secure, but those saving graces would take months to play out whereas higher rates are here today. 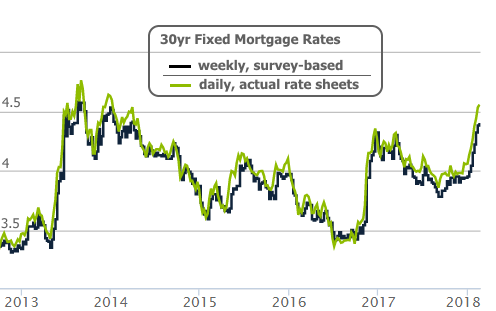