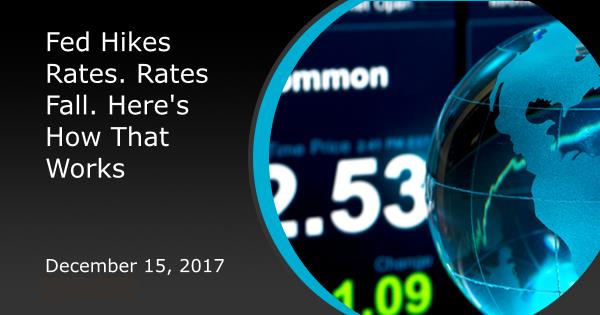 The Federal Reserve (or "The Fed") hiked rates this week, but mortgage rates fell. Believe it or not, this actually doesn't violate the rules of the universe.

There are all kinds of rates.  Some are fixed.  Some are adjustable.  Some apply to longer-term debt (like mortgages) while others govern very short time frames (like overnight!).  Short and long term rates can affect one another, but they don't always move in the same direction or by the same amount.

The rate the Fed adjusts (aptly named, the Fed Funds Rate), governs only the shortest-time frames (generally overnight loans among big banks).  That means mortgage rates don't have to follow the Fed Funds Rate, even though Fed policy has a profound effect on overall interest rate volatility.

The reason that mortgage rates fell after the Fed rate hike this week is even easier to understand.  It has to do with how traders account for probabilities.  After all, since we're dealing with large amounts of money, we might as well trade like the Fed already hiked rates if we're pretty sure they're going to.

Simply put, EVERYONE responsible for trading the bonds that govern interest rates (and I do mean every last person without a single exception) was well aware that the Fed was almost certain to hike rates this week.  The Fed was by no means shy about telegraphing its intention.

That means rates had long since adjusted to the probability--so much so that the hike itself was a non-event.  This isn't a new phenomenon.  In fact, rates often RISE in the weeks and months leading up to a Fed rate hike only to fall after the hike itself. 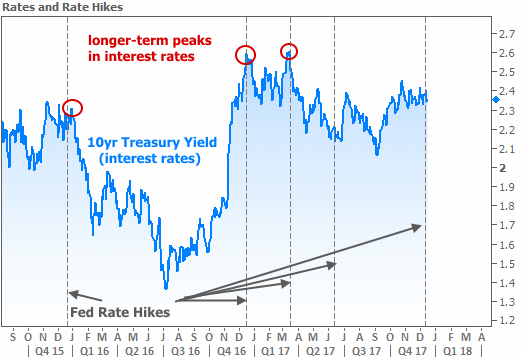 Other parts of this week's Fed communications were still important, but they actually helped rates move LOWER.  Chief among these were the Fed's economic projections.

The most important component of the projections is a list (a "dot plot" actually) of where every Fed member thinks the Fed rate will be in the coming years.  This is essentially the Fed's rate hike outlook, and bond markets usually react to it.

In the current case, the rate hike outlook didn't accelerate as much as it did the last time it was released in September.  The Fed thinks it will probably hike 3-4 more times by the end of 2019 and then attempt to tread water there.  As discussed above, traders already traded rates to their "best guess" levels.  Since the new forecasts make the best-guess seem a bit high, traders could afford to trade rates slightly lower on Wednesday afternoon.

In addition to the Fed-related news, Wednesday also brought a key inflation report, the Consumer Price Index.  The data is actually related to the market's outlook for Fed rate hikes because the Fed is seen as being more likely to hike when inflation is over 2% annually.

It looked like we were well on our way over 2% heading into 2017 (hence the increased pace of rate hikes seen in the 1st chart).  Then, inflation suddenly fell to 2-year lows in June.  It wasn't an isolated incident either.  Core annual inflation remained at 1.7% for 5 straight months.   Even after attempting to calculate certain temporary variables, experts were puzzled.

It looked like bond markets could finally get back to the business of moving toward higher rates after last month's inflation report showed a lift-off.  But on Wednesday morning (before the Fed), the Consumer Price Index showed core inflation had fallen right back to the recent floor. 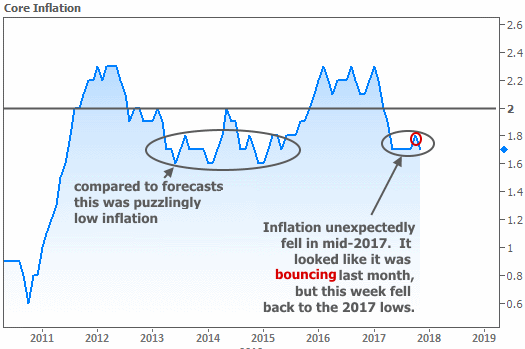 Granted, this may be much ado about nothing as inflation data shifts at a glacial pace at times.  Nonetheless, traders want to see proof of higher inflation before they start pushing rates any higher than they already have.

One of the reasons rates have been pushed higher is the fear of future inflation due to expected fiscal policies.  Not only would government spending (on the tax bill, for instance) potentially spur inflation, it also increases the amount of debt auctioned by Treasury.  Higher Treasury supply pushes most domestic interest rates higher, including mortgages. That's why the tax bill has been such a hot button for rates.

The bill has also been a hot button for stocks, which is logical considering one of its hallmarks is a big, permanent corporate tax cut.  Both hot buttons were pushed this week when, for 24 hours, markets worried that a few Republican senators were going to change their vote.  (Spoiler alert: they didn't).

The back and forth made for a quick move lower in stocks and bonds on Thursday (mostly stocks) followed by a bounce back to higher levels on Friday (much higher for stocks).  Bonds were clearly more concerned with the inflation/Fed combo on Wednesday while stocks are on the edge of their seat over the tax bill. 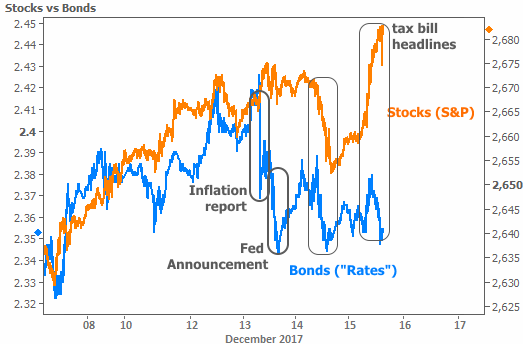 As of Friday night, the final bill is drafted and officially filed, thus setting the stage for a vote next week.  Several provisions have potentially serious repercussions for housing and mortgage markets.  We've discussed those in previous newsletters, and will be breaking them down in greater detail in the coming weeks.