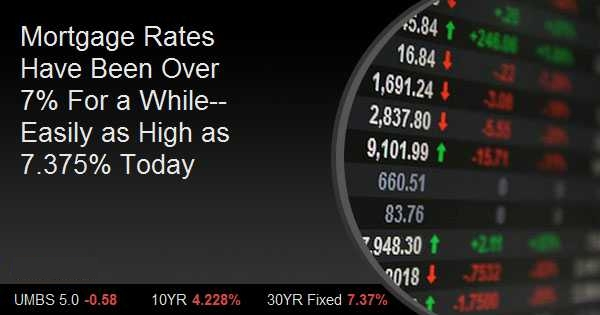 Let's talk about exactly what it means to see a mortgage rate headline in the news, or even from some seemingly official index or survey.

In fact, let's start with rate quotes themselves.  There are several ways of doing it and several reasons what you see might not be exactly what you get, even if the entity responsible for the quote is not intentionally trying to mislead you.  A competent loan officer should be able to explain to you why that is.

One common reason is that an advertised rate will be a best case scenario, and your scenario might not be best case.  Additionally rates can change so much, so quickly these days that the electronic mechanism that keeps advertised rates up to date may not have caught up to reality.  This is especially problematic for anyone advertising rates on TV or radio, which apparently is still a thing at times.

Even by the time you've actually gotten a preapproval from a lender, your terms are not guaranteed until you actually have a lock agreement.  Your lender may have quoted you a rate with 110% honesty and transparency, but if you didn't lock it at that moment, there's a good chance that rates will have moved higher the next time you speak to them, even if it's only an hour or two later.  Waiting a day or more to decide?  Forget about it.

Am I being overly dramatic?  Anyone working in the mortgage industry right now will tell you I'm not being nearly dramatic enough.  With the exception of those of us who are old enough to have actually been working in the industry in 1979-1981, no one has ever seen anything remotely like this.  To understand what I mean, check out the following chart.

And curveball alert: while the chart above only has one line on it, it should have another that shows the level of upfront costs required to obtain the rates quoted in the survey.

More important curveball alert: the chart above is already stale, as has so frequently been the case in 2022.  If we're following actual daily rates, the average lender is easily already up to 7.375%.  The following chart shows how daily rates stack up.

Bottom line, things are ugly in mortgage rate land.  And for those of you who like to post links to mortgage rate articles on internet forums, twitter, etc. saying things like "rates are over 7% and these kids are crying.  Why back in my day, we would have been thrilled to see 7%," yes, your rate spike of 10% was bigger.  Ours is only 4-5% so far and we hope you always keep your record.  Beyond that and without mentioning several of the "yeah buts," I'll leave it at this: everything's relative, and relative to where we were, where we are now is not very fun.